In a crucial poll season, even BJP leaders couldn't be distracted by Uma's 'yatra' 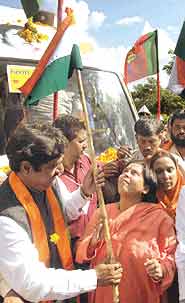 Uma Bharati won't be carrying fond memories of her five-day journey through the state as part of the tiranga yatra. National and state BJP heavyweights were conspicuously absent, the arrangements were rather ordinary for someone of Bharati's stature. The yatra's route wasn't inspiring, and the response in most places even less so. To top it all, the state unit of the BJP made it clear that the tiranga yatra wasn't, and will not be, part of their poll campaign.

The reasons for the wariness are not far to seek. This is a do-or-die election for the Shiv Sena-BJP. After losing power at the Centre in May, the Maharashtra election could prove to be the much-needed springboard for bouncing back. And the state in-charge, Pramod Mahajan, does not want any of his thunder stolen, particularly by Uma Bharati. No surprise then that he wasn't anywhere to be seen. "He's campaigning, his itinerary was fixed a long while back," was an aide's feeble explanation. State BJP president and deputy CM-aspirant Gopinath Munde, in whose Parli-Vaijnath constituency Bharati's yatra meandered extensively, decided to receive her at the eleventh hour.

The issues Uma raised also failed to strike a chord in rural Maharashtra where Uma toured. A controversy over the national flag seems a distant thing when lives are endangered by sagging farm incomes and rising suicides. Take Yavatmal, the cotton-growing district which saw half of all the farmer suicides this year. Bharati's rousing speeches left most people cold except the die-hard cadre. Villagers reportedly asked, "What yatra is this, why does our national flag need a yatra?"

The timing's all wrong too. The Sena-BJP has been trying to shed the rabble-rouser tag, and attempting to focus on the "substantive concerns" of the state. And there have been no dearth of such concerns in this election. Besides, the limitations of yatras and hi-tech campaigning were brought home rather strongly in May and Mahajan is steering 360 degrees away from that electioneering paradigm. Uma's jamboree had the potential for derailing the party's carefully detailed campaign plans, but sensibly Mahajan refused to be distracted. The party unit followed suit.