Fly On The Chandelier

The Indian drawing room has been caught between heirlooms and handlooms, cut glass and plate glass, Faberge and Fabindia... 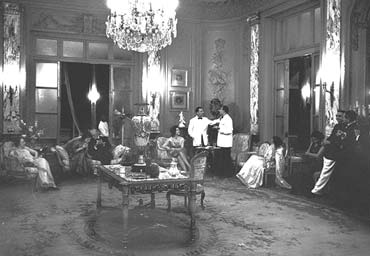 outlookindia.com
-0001-11-30T00:00:00+0553
On a Sunday not long ago, I was reading Madhur Jaffrey's childhood memoir, Climbing the Mango Trees, about growing up in a large house in Old Delhi, when I suddenly sat up. This sometimes happens when reading a particularly absorbing book. There is a scene, a character or a place, portrayed so exactly, that it seems drawn from your own life: a sense of deja vu ripples through to make it a preternatural moment.

Madhur Jaffrey was describing her grandfather's drawing room in a colonial house in Civil Lines: "No one...had been blessed with much sense of style, so furniture bought wholesale at auction was shoved against all four walls...there was a radio around which we huddled to hear Hindi movie songs at midday and cricket commentaries in the afternoons...(there was) a big sofa, above which hung a large framed print of Hope sitting, head bent, on top of the globe, playing a lyre.... Next, on a stand and enclosed in glass, was a miniature marble reproduction of the Taj Mahal and a potted palm on a stand.... The drawing room was, basically, a functional room that had been designed—or not designed—to hold a lot of people."

I knew that room! Or one so like it; they must have been endlessly replicated across India, with their haphazard decoration, the family activity that centred round them or the strange cast of characters that wafted in and out. The first drawing room I knew was known as the gol kamra, the centrepiece of the red-brick bungalow in Punjab that I was born in. It hadn't changed in decades. A serviceable Amritsar jail carpet graced it rather than the "Persian carpet of exquisite workmanship" in Madhur's family home, and the radio sometimes gave off a powerful shock; but it was the room where marriage proposals were made, new-born babies displayed and guests were served tea and pakoras. A happy room, a place where the family put its best foot forward (arguments, quarrels and estrangements occurred elsewhere in the house) from the moment the mali plopped guldastas, floral posies, into hideous Moradabad brass vases.

That's the first thing about drawing rooms, call them by any other name—baithak, parlour, lounge or living room: they are that public space by which we are (and hope to be) judged by outsiders. They represent our worldly worth and self-esteem. Manners are necessary, a formality creeps in, even if nowadays an eight-foot home theatre screen drops from the ceiling and rich gargoyle-printed Gianni Versace cushions invite guests to feel "at home". Living rooms are not where we willingly drop our clothes.

In the poorest Indian homes—a single room in a Mumbai chawl, for instance, or in the circular mud-and-thatch dwellings that the Rabadis of Kutch call bungas, there is a space-within-a-space that's hurriedly spruced up to receive guests.

Taste is another matter altogether and, traditionally, unless rich or worldly, educated Indian classes have never put much store by it. Good taste and bad are relative terms in a country as large, heterogeneous and forever on the cusp of change. For example: the film industry, my parents' generation believed, was the epitome of dubious taste, in the way film sets were dressed and the parvenu style of film stars' homes. But my child may not think so. She may think that the living room in Dil Chahta Hai is a lot more real than my parents thought it was—with its grand piano and dangerously swerving staircase—in Andaaz. Have standards in Bollywood production design improved or have the new stars—often the progeny of older stars—grown wiser, more worldly and with it?

Middle-class Indians have never recovered from "drawing-room politics". Precariously caught between heirlooms and handloom, cut glass and plate glass, they will go with the prevailing Taj complex—the hotel, not the mausoleum. Go into crumbling inner-city havelis or provincial homes and you'll get the picture: 18th-century miniatures hang over the fridge, Chinese porcelain and Lalique glass are displayed with Dinky toys and miniature liqueur bottles (nicked from the last Air India flight). I knew an MP-maharaja who used to show off ancestral treasures against such a colliding backdrop of styles: Faberge and Fabindia, Cartier and Cottage Industries. 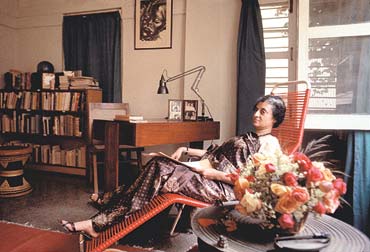 Indira Gandhi in her study in Delhi, only the roses relieve the austerity
Click here for larger image

It was not till the 1960s that there was a large-scale revolution in urban middle-class taste. Government intervened through a network of organisations (Handloom House, Handloom & Handicrafts Corporation, Weaver's Service centres, Cottage Industries, National Institute of Design etc) and Indira Gandhi's imprimatur was felt everywhere. Prime minister for 12 years, she was keen on design and marshalled taste-makers of the order of Kamaladevi Chattopadhyaya, Pupul Jayakar, Charles Correa, Ahmedabad's Sarabhai family and their cultural inheritors such as Martand Singh and Rajeev Sethi. Indian arts, crafts and textiles were wheeled out at trade fairs abroad and foreign designers were honoured guests at home. Up-to-date India was doffing its cap at international design, dictated from above.

Patwant Singh, who ran Design magazine in Delhi, put a Charles Eames chair in his drawing room, weaver Monika Correa installed a functioning handloom in hers, and Minnie Boga in Delhi and Vina Mody (wife of the late MP Piloo Mody) ran successful furnishing shops in Delhi and Mumbai where "ethnic chic" and 1970s modernism lived in conjugal bliss. One result of this union was a line of straight-lined furniture with seats and backrests in woven charpai string. Middle-class mothers such as mine were in full cry. Plastic in any form—Formica tabletops, pseudo-Scandinavian furniture and lamps and Melmoware dinner plate—was their dream. But it didn't last long—like the Moradabad vases and Melmoware soon became extinct. 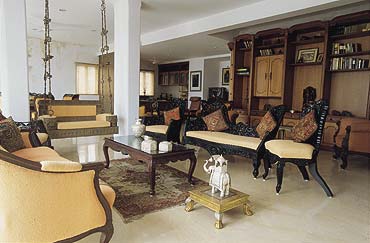 Louis Quinze meets the Orient: A living-room set-up in a Mumbai residence, 2000

The traces were visible well into the 1980s. For a perfectly preserved full-blown example, retained like a fly trapped in amber, you can stroll past Indira Gandhi's personal interiors, encased behind glass at 1, Safdarjung Road. It's a national treasure as memsahib's memorabilia: modernism, ethic terracotta, books, antiquity and discreetly hidden works by Husain or Gujral are combined with effortless ease. It's apparently comfy and low key. In fact, it's an artful, but not effortless, blend of an Indo-European intellectual's interior.

I recall a much-quoted bon mot about exactly such a style. In the 1990s, Gautam Bhatia, the architect and satirist who coined the phrases "Punjabi Baroque" and "Bania Gothic" to describe the new urban living styles, walked into the flat of Malvika Singh, publisher of the intellectual magazine Seminar, surveyed the room, cocked an eyebrow and announced, "Early Pupul Jayakar?"

Every generation acquires the worst faults of its age, so it can be assumed that the drawing rooms we hate the most are our parents'. Deconstructing the notion isn't difficult: they are too near to our own perceived faults, so we prefer something two generations removed as delightfully antique, therefore, pleasing. My loathing for Moradabad brass and pseudo-Scandinavian furniture persists but, when my mother died some years ago, I rather fancied her father's Edwardian whatnots and Meiji Restoration porcelain. My parents, on the other hand, may have thought them worth nothing but a good kick. Nowadays, the drawing room with the most swagger is where period Husains, Souzas and Anjolie Menons jostle with installation art by some newly discovered genius. 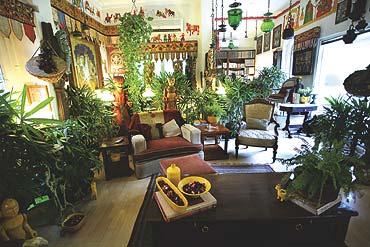 Some years ago, when I was researching my book Indian Interiors, my editors looked through hundreds of Indian locations and homes—metropolitan, urban and rural—from Dimple Kapadia's lush drawing room in Mumbai to the blue-washed town houses of Jodhpur. But there was one interior that we were unanimous about including from the outset: Gandhi's ascetic room at the Sabarmati Ashram in Ahmedabad. It is small, light-filled and airy and virtually a cell. There is nothing to it: a gadda and charkha, a munshi-style desk, a calendar, a clock and some books. It's minimalism in its purest form: natural, functional and devoid of all decoration.

In the prevailing mantra of minimalist style that haunts Indian drawing rooms, Indians have, as usual, misunderstood the origin and development of the concept that the West took, adapted and redefined from the East. It has nothing to do with cunning lighting or 80-inch TV sets and digital surround sound. It has to do with the final simplicities of life: of paring down one's drawing room to an empty void.

Sunil Sethi, senior editor, NDTV, is the author of Indian Interiors and Inside Asia, A Journey Through Architecture And Design In 12 Countries, From India To Japan.

Sixty Years On, More Sinned Against...