Flux On The Fronts

How will India cope with radical changes in its neighbourhood? 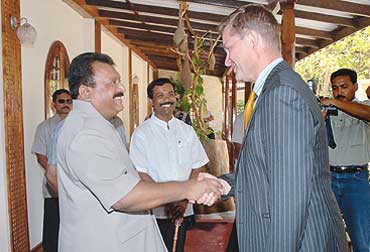 outlookindia.com
-0001-11-30T00:00:00+0553
India's backyard is in tumult, as both Sri Lanka and Nepal lurch forward, apprehensively and cautiously, to fashion a future decidedly different from their bloody past. In Sri Lanka, the dreaded Tigers have begun to growl and bare their claws, threatening to plunge the country into yet another round of bloodletting. Nepal has witnessed a cataclysmic change, riding on popular upsurge to divest the king of his power and restoring the supremacy of Parliament. Yet the revolution is incomplete: the Himalayan Hindu kingdom, now a secular state, has still to elect a constituent assembly that's expected to midwife a new political arrangement.

As an uncertain future looms over the two countries, New Delhi faces the challenge of maintaining its influence in the neighbourhood and simultaneously restoring order here. As an emerging power, it has to demonstrate that it's capable of providing a decisive lead in peace-making without alienating the big powers who are more than willing to step in.

In Nepal, India's goal is to ensure that the process of electing a constituent assembly remains an entirely Nepali effort, free of any third-party interference. Till now, India has effectively managed to evolve an international consensus on Nepal among countries like the US, the UK and China besides the European Union—they supported pro-democracy forces there, as New Delhi had wanted. The new goal is more complex and challenging: how to keep out external players from the Nepali cauldron as Maoists are persuaded to abandon violence and participate in multi-party democracy?

Observers feel the seven-party alliance (SPA) is sure to express the desire for a "third party" to witness its impending discussions with the Maoists on the process to elect a constituent assembly. Government sources say New Delhi does not have a "backyard complex", yet in the same breath express apprehensions over a third party being brought in to oversee the election process there. This development, they fear, could bring about a moral equivalence between the SPA and the Maoists in the same way as the Norwegians have willy-nilly brought it about between the Sri Lankan government and the LTTE. It's risky to treat the state and an opposing political group on par. Explains a source: "We would like the Nepali civil society—human rights organisations, eminent people, etc—to take over this role of witnessing the process, not an outsider like the UN."

Equally, New Delhi wants to stay out of this process for two reasons. One, should the process in Nepal flounder, India could be again accused of playing dirty games to destabilise that country. It consequently feels it must maintain a discreet distance from the process and, simultaneously, keep at bay any third party willing to get entangled in Nepal. India is sceptical about the involvement of even the United Nations because its team would be mainly drawn from western countries who, New Delhi believes, have a "poor understanding of Nepal". 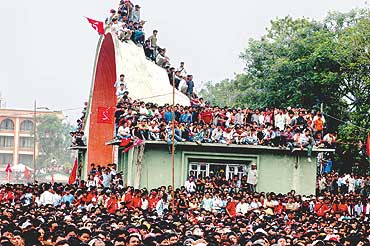 However, India is willing to allow some kind of international supervision when the Maoists agree to demobilise and disarm. This is because these are technical matters, and do not have political underpinnings as, say, an election to a constituent assembly has. "As long as international partners help us in furthering our interests, we don't have a problem," says the senior government source.

In Sri Lanka, India is deeply embroiled despite the presence of Norway, Japan, the EU and the US. But there India has encountered problems because coalition governments rule in New Delhi, Chennai and Colombo. This has left the government hobbled in taking tough foreign policy decisions to further its interests. For instance, the defence agreement between India and Sri Lanka has not been inked because of the fear of hurting the sensitivity of the government's coalition partners in Tamil Nadu. Many feel the signing of this pact could have sent a strong signal to the LTTE about its limits.

India was always doubtful about Oslo's mediation between the Lankan government and the Tigers. According to a source, Jaswant Singh, as foreign minister in the erstwhile NDA government, once remarked to his Norwegian interlocutor that mediating in Sri Lanka "will be like walking on water from Norway to Sweden. I wish you all the best." The already floundering negotiations suffered a further setback with the advent of the hardliner Mahinda Rajapakse's coalition. Though his government has tasked an all-party expert group to delineate the possible contours of "maximum devolution" of powers for making Sri Lanka a genuine federation, no timeframe has been set out for it to complete the task.

Sources assert India is better placed than ever to help manage the situation there. A hint of this came during Lankan foreign minister Mangala Samaraweera's visit to Delhi last month. Then, on May 8, Union defence minister Pranab Mukherjee told the press, "You know, instead of calling it a (defence) pact, we have defence cooperation in multifarious areas including the supply of equipment, training. For example, Lankan officers are the highest users (from any country) of all the technical opportunities we have in our defence institutions. Secondly, in respect of equipment, we are also providing as and when (there are) requests. There's constant interaction between the service officers." Sources say about 1,000 Sri Lankan service personnel undergo some kind of training in India every year, the highest for any country. They say New Delhi has found a way to support Colombo covertly and with "lethal" assistance.

A source summed up the logic of the Lanka policy thus: "New Delhi is sensitive to the fact that minus the LTTE the Sinhalas will walk all over the place, and any support to the Tigers will result in declaration of Eelam. The best strategy, till such time as the players in Sri Lanka are able to arrive at a home-grown solution, is to keep a lid on things. Complete victory of one side is not in our interests."

Short of a direct involvement, New Delhi's effort is to help bolster Colombo's efforts to take on the LTTE—without wiping it out. Once Sri Lanka was taken off the negative list (it was put there in pursuance of a hands-off Lanka policy after Rajiv Gandhi's assassination) in October 2003, opportunities opened. Realising the Lankan forces lack the capacity to fight the Tigers, and aware that Colombo is crippled financially, India devised a strategy that pushes its strategic interests and, in some ways, complements the Norwegian efforts. The planks of this policy are as follows:

Naval chief Arun Prakash told the press during a September '04 visit to Sri Lanka that when India was not supplying lethal weapons to the island-nation, it was procuring them from elsewhere. The situation had changed from October '03, he added. "Sri Lankan army was a regular mess," said a source. Adds another top official: "We have started a military relationship. Previously there was not a single piece of Indian equipment. Now we are very much there."

In some ways, India's foreign policy orientation has changed. As the source explains, "We must disabuse ourselves of the earlier notion that we were somehow masters of the neighbourhood. It is a such a romantic notion. Ultimately, it is not the presence of other countries that counts. It's the influence that you wield despite the presence of others."