Flux Of The Matter

One year on, it's still in transition. The problem is, the direction of transition is still not clear. 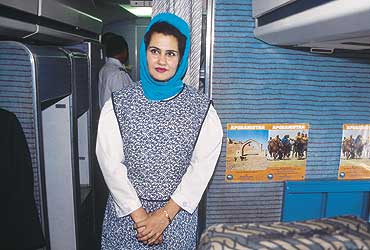 outlookindia.com
-0001-11-30T00:00:00+0553
On a recent flight to Kandahar, I remembered flying with coffins. In the '80s, when Soviet-backed troops still battled mujahideen forces, corpses were often carried on military aircraft and Ariana flights. A sense of loss was ever present. This flight to Kandahar was different—a trip to a Karzai family wedding in the former Taliban heartland. Afghans marvelled at how much had changed in a year. (On November 13 last year, the Taliban collapsed and Kabul fell.)

But on the return journey, the mood was sombre. One of Hamid Karzai's bodyguards, well liked by many on his team, died when someone tried to assassinate the President. Afghanistan is like that these days: moments when the enormity of change sinks in; moments of dread that it could so easily unravel.

It's easy to be lulled into a false sense of security in Kabul. A decades-old curfew has just been lifted. There's a fresh coat of paint on shops across the city and a new energy on streets teeming with bicycles, gleaming white aid jeeps and swish black limousines.

Western aid officials are still effusing about how impressed they were by last month's Implementation Group meeting. A succession of well-spoken, finely-suited Afghan ministers presented their portfolios to a gathering of Afghans, foreign officials and experts. One senior foreign banker was asked whether Kabul had met expectations of what a post-conflict government should be capable of. There was an ecstatic reply. This was better than any other post-conflict situation. Better, the banker added with a rhetorical flourish, than what India or Pakistan could deliver!

But there is still a long dark shadow: reports of brutal robberies in Kabul and extortion on roads; clashes in some provinces; questions by Afghans about how much longer it will take for their lives to get better.

One year on from the fall of Kabul, many Afghans still believe this is their best chance in decades. Many fear its their last chance.

The building of a post-Taliban—indeed, a post-mujahideen—order is still riddled with problems and threats. It couldn't be otherwise in a country emerging from nearly three decades of political instability. The real issue is whether a process is under way that leads Afghanistan away from its tortuous past.

At the centre of this process is the leader, thrust into power last year, with the right Afghan credentials and the stamp of approval of the international community. Now Karzai finds himself caught in a vice—between the expectations of Afghans who have suffered, and in some cases still suffer, at the hands of warlords or commanders, and the demands of the powerful regional players who believe this is their victory.

Last month, I asked the President when he would start carrying out his vow to be tougher as a President elected by the Loya Jirga, the grand assembly, than he had been as interim leader. He clenched his jaws and declared, "I am being tough but in the right way. You'll see the results."

Now, he's started taking action—a number of local officials have been dismissed for corruption and other offences, including extortion and drugs, after complaints from residents. Whether the orders are followed through is a risky test of the President's authority.

Vague declarations to "rid Afghanistan of warlordism" have also changed into sharp warnings to commanders to stop their abuses or face the consequences. It isn't a coincidence that last month the visiting American envoy Zalmay Khalilzad was stiffening his own message, backed up by announcements that some aid to the northern city of Mazar-e-Sharif had been suspended until fighting stopped between rival commanders Abdul Rashid Dostum and Atta Mohammad.

To get results, Karzai needs credible force or compelling incentives—for now, both come from foreign backers.He still has no forces under his command. He hasn't even been armed with enough reconstruction projects to provide any visible change in the provinces, besides jobs and purpose for demobilised fighters. Even convincing regional commanders to hand over customs revenues remains a challenge.

Some believe the international community, and in particular the United States, could have sent an unequivocal message for change much sooner, even as soon as last December's deal on an interim government agreed on in Bonn. Afghans call it the threat of B52—a reference to the awesome American airpower that swept the Northern Alliance, dominated by forces from the Panjshir Valley, into power a year ago this month.

Senior western military officers express concern that the process of building a multi-ethnic national army and sharing power is still too slow, not forceful enough. The longer it takes, they say, the more difficult it becomes to rein in the most powerful figures, including the controversial defence minister and first vice-president Marshal Mohammad Fahim.

But Washington is still fighting two Afghan wars: the continuing search for Al Qaeda requires cooperation with the warlords and the battle to train a new national army demands the demobilisation of old militia. And there's a third war looming on the horizon—a mother of all battles with Iraq—which could force Washington, despite its stong focus, to take its eye off this ball. For now, American generals are stepping up the pace of helping Afghans chart a new blueprint for security reform. And with no real prospect of the International Security Assistance Force being expanded outside Kabul, alternatives are now being explored, including moves to establish a limited foreign military presence in key provincial centres.

Western donors, stung by criticism that their aid wasn't sufficient and didn't go either to the fledgling Afghan government or reconstruction, are also re-examining the level of pledges and the kind of projects they're funding. Afghans are struggling to hold the world to its promise to stay with them "for the long haul".

This time, they're also keeping a close watch on their neighbours. There've been some tense exchanges between Karzai and Pakistan President Pervez Musharraf over evidence of revived meddling by elements in Pakistan's military intelligence, the isi, including reports of contacts with the discredited former mujahideen leader, Gulbuddin Hekmatyar, who has been blamed for recent attacks in Kabul. Pakistan has made it known it's not happy about India's growing presence in Afghanistan, including a consulate in Jalalabad, close to Pakistan's border. And the Americans are concerned that the Russians are still supplying weapons directly to their old ally, defence minister Fahim, undercutting plans for a national force and fuelling concern that the marshal is still consolidating his own private army. But Karzai's approach to his neighbours is, as with the warlords, an inclusive one—first bring everyone inside the tent. He talks of inviting all the neighbours to Kabul to sign a non-interference pact (!).

One year on, it's still a question of moving from the rule of guns to the rule of law. Marshal Fahim uses every opportunity to express his backing for Karzai. But he's told his closest allies he wants to run for president in 2004, if Karzai doesn't seek another term. It's not clear he will. His recent brush with death concentrated minds on the lack of "a Pashtoon successor". And it's not even clear Afghanistan will be able to meet both the December 2003 deadline for a new constitution and elections shortly after. That is a possible setback that's already being mentioned in public, lest it be cast as failure. Other setbacks hang ominously in the air: the risk of more assassination attempts, the threat of old ways killing new hopes.