Home  »  Magazine  »  National  » Jharkhand Impasse »  Flux Being the Only Constant

Flux Being the Only Constant

Why is Jharkhand fated to be thus? 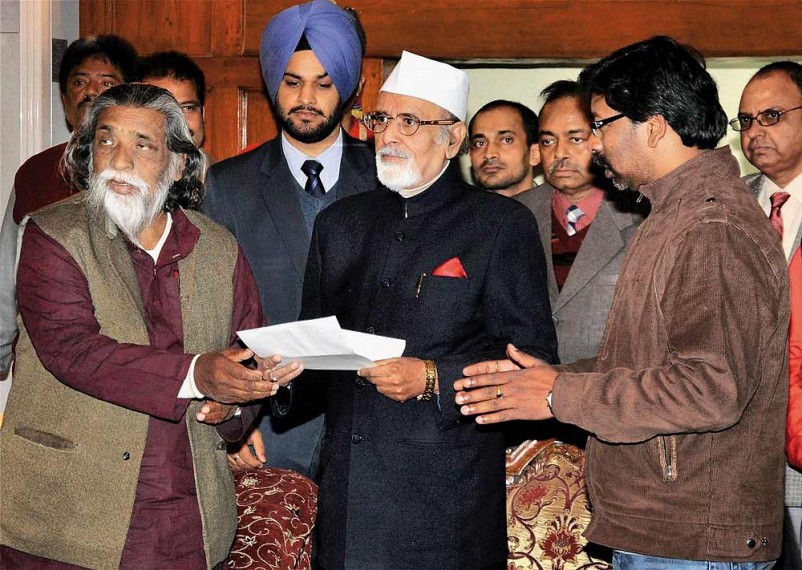 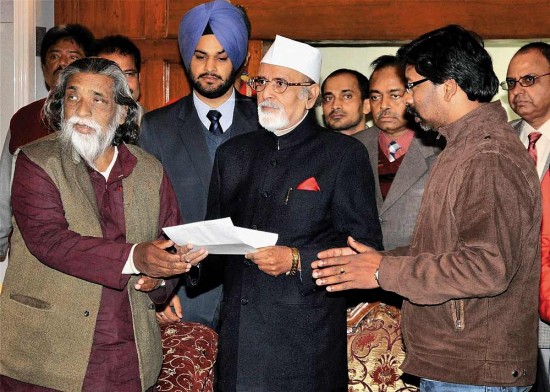 Tell-All Numbers
12 years ago, Jharkhand was carved out of  Bihar in 2000
8 governments have held office since
8 Governors have occupied the Raj Bhavan
2 spells of President’s Rule till 2012
2.5 years, the longest a govt was in office
11 days were the shortest a govt lasted
1 former CM in jail for money laundering
4 former ministers in jail for disproportionate assets
59 MLAs who won in 2009 have criminal cases

As Jharkhand seems headed for another spell of President’s Rule, with the Congress weighing its options and seeking more time to work out an arrangement to its satisfaction, opinion is divided on the reasons for the chronic political instability in the state. There is broad agreement, though, that politicians and political parties have let down the state. Dr Ajay Kumar, the Jharkhand Vikas Morcha MP from Jamshedpur, blames industry and mining lobbies for destabilising the state. “Politics in Jharkhand has become an industry without investment,” he says. Jharkhand BJP leader Sarayu Roy also blames the “greed” of political parties and vaulting ambition of netas for the sorry state. 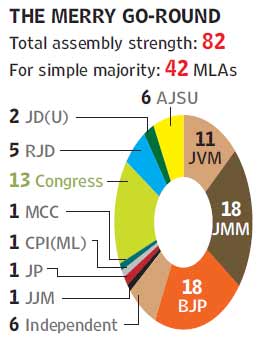 No elected government in the state has completed its full term in office (see chart) and virtually all past governments have fallen on the issue of sharing spoils of power. This time too, alliance partner Jharkhand Mukti Morcha (JMM) raised the political pitch by demanding that the BJP honour an “understanding” to make the post of chief minister rotational. The BJP denied any such understanding and instead recommended the dissolution of the assembly and a fresh election.

With both the BJP and jmm having 18 mlas each, it was hardly unreasonable for the latter to expect an opportunity to lead the government. But although jmm’s Hemant Soren was one of the two deputy CMs, his relationship with CM Arjun Munda, and the other deputy CM, Sudesh Mahto of the All Jharkhand Students Union (AJSU), deteriorated steadily. Soren complained that Mahto was being given more important portfolios and importance. With ajsu having only six mlas in the assembly, Soren again had reason to be unhappy.

In any case, the BJP-led government had become a free-for-all. The CM was confined to his official residence following an emergency landing of his helicopter last May. Ministers were taking decisions without cabinet approval, making appointments on their own and reportedly demanding their share of the mining spoils at the bidding stage itself.

Now, the BJP, say observers in Ranchi, has tried to cut its losses and occupy the moral high ground by recommending the dissolution of the assembly. It could go to elections blaming the jmm for derailing the government. But with the assembly poll still two years away, most mlas are not keen on an early election. Keeping the assembly in suspended animation could allay their fears and allow the Congress time to work through the President’s Rule and cobble up a majority.

Significantly, unlike Chhattisgarh and Uttarakhand, the two other states which were carved out at the same time in 2000, a multiplicity of parties has been Jharkhand’s bane. Both Chhattisgarh and Uttarakhand have settled down to a largely two-party contest. Jharkhand, by contrast, is marked by a large number of parties, possibly reflecting a fractured polity of tribals, new settlers, industrial workers and miners, and older, non-tribal inhabitants. The state also presents a less homogeneous demography, with four large tribes (Santhal, Munda, Oraon and Ho) and 26 minor tribes. Still, no ideological divide explains the jmm, jvm, ajsu and several other minor political parties chasing by and large the same constituency.

The two major national parties, the BJP and Congress, have progressively lost ground and together could win only 31 out of 81 seats in the last assembly poll. Even more significantly, the two major Left parties, the CPI and the CPI(M), are unrepresented in the assembly while the cpi(ml) and the Marxist Coordination Committee have an MLA each. The bargaining or blackmailing power, consequently, has shifted to independent mlas or parties with one, two or six MLAS.

The Fort Of Hard Knox