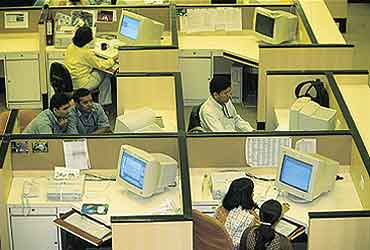 outlookindia.com
-0001-11-30T00:00:00+0553
I find it very interesting to look back in time to get a sense of history. Clearly, every historian brings his own perspective of the defining events and moments that take the human history in the direction that it has taken. Let me share with you my sense of these defining moments for India's IT industry, especially in the past 10 years when it took a definitive shape and tasted real success.

The first and foremost, in my view, is the opening up of telecom sector to private operators, which led to the rapid expansion of telecom services as well as dramatic quality improvements. It is quite difficult for a young person today to imagine the kind of telecom infrastructure we had in place in the early nineties! Without going into that, I can say confidently that currently it can compete with the best in the world. Good quality telecom infrastructure came at a time when the IT services industry was moving away from on-site to offshore delivery of services and it really spurred the offshoring of software services. Suddenly it did not matter that our roads were potholed, ports obsolete and customs clearance excruciatingly slow. Software services could still be delivered as long as the telecom network functioned.

Combined with quality telecom was the fact that the government went out of the way to create a policy environment and procedures which supported the growth of the IT services industry. The policy measures that I think were critical include: setting up of software technology parks, tax holidays, permitting the industry to raise money overseas through borrowings and equity and supportive foreign exchange regulations. I do believe that the government is given less credit than is really due to it for helping develop a global software industry.

The third factor is that the higher technical education system in the country rose to the challenge of graduating more engineers to meet with the demand placed by the IT services industry. From less than one lakh in the early nineties, we now graduate more than three lakh degree and diploma engineers every year. Of this output, the IT services industry alone recruits more than 50 per cent. There have been years when shortage of fresh engineers appeared imminent. It is entirely due to private enterprise that more engineering colleges came into being. Now, I believe that the quality of engineers being turned out is not uniformly good and leaves a lot to be desired, but I also trust that market forces will help raise the quality in the same manner as they helped address the quantity issue.

Fourth, the IT industry was lucky to have the tide of y2k raising all boats at a crucial growth juncture. At one level, y2k brought a lot business to Indian IT companies, and at another it opened up a lot of doors to higher quality work as global companies got a good feel of working with Indian companies.

While these four events defined the course the IT services industry took, let me also share with you my perspective of the direction in which I would like the industry to grow over the next ten years. 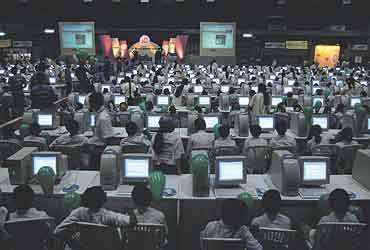 Second, I believe that IT usage in households is waiting to explode in the country. Some studies show that an average per capita income of US$3,000, and thereabouts, is the level beyond which the purchase of consumer durables starts growing dramatically.With the current per capita income, on purchase power parity basis, hovering around $2,500, we should be breaching the $3,000 level in another three to five years. This would mean a significant increase in purchase of IT gadgets, be it PCs, handheld devices or cellphones.

Third, I would like to see a dramatic increase in IT usage by the governments at the Centre and the states, especially in areas of citizen interface. Some areas where IT usage can make significant improvements are legal records, property records, tax payment, etc. Imagine the benefits that would accrue from computerisation of land and property records, ranging from reduction in litigation and corruption to increase in public revenue. The usage of IT in government work would also considerably improve the quality of governance.

Fourth, I would like to see the IT services industry creating four million jobs every year. In the current year, the industry would have added two lakh jobs directly and six lakh jobs indirectly. If we stay on course, by 2015 these numbers should read one million jobs directly and another three million jobs indirectly, bringing the total to four million. This would solve 40 per cent of the unemployment problem, if you consider that our planners would like to generate 10 million jobs every year to absorb people joining the labour pool.

Would the future unfold as I would like it to be? I am not sure of that. What I am sure about is that it is up to us to make it happen.