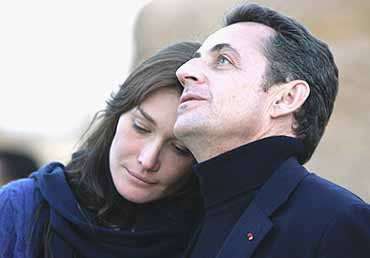 outlookindia.com
-0001-11-30T00:00:00+0553
This Republic Day may be remembered for the glamour quotient. Competing with the official pageant will be the amorous parade of the guest of honour, French President Nicolas Sarkozy and his charming chanteuse Carla Bruni. The fetching couple in matching Raybans on the VIP dais? After a stroll through the pyramids in Egypt and a camel ride in Jordan's Red Sea resort of Aqaba, Speedy Sarko and Sexy Bruni seem set to add 'exotic' India to their pre-wedding, very public honeymoon.

Even the French seem troubled by this in-your-face courtship with the First Lovebirds posing for the paparazzi, throwing the staid Elysee Palace into a tizzy. Bruni is a former supermodel, an heiress and a singer and could put a dramatic end to the idea of decorously retiring wives. Presidential etiquette in Paris is being redefined as we speak and it may force protocol police in India to think on their feet as well when Sarkozy comes arm-in-arm with his Italo-Franco cocktail. After all, he asked somewhat touchingly if he is not entitled to the same 'happiness' as an average French citizen?

Oui, monsieur president. Unlike the Saudis, who reportedly told him not to bring his girlfriend when he visits Riyadh later this month, India has the centuries-old tradition of welcoming guests who could well be gods or goddesses in disguise. So what if the Indian protocol book devised in more rigid times only has the category called "spouse", not girlfriend or companion, the same courtesies should be extended to Bruni, says former foreign secretary Lalit Mansingh. "We are in the 21st century. Who the president has as companion is his business."

Besides, Indian officials have dealt with "situations" before and quietly accommodated various visiting entourages. They have been there and done that. True, no one as enticing and well-known as Bruni has ever appeared in a foreign delegation, but officials remember former Nicaraguan president Daniel Ortega, an evolved revolutionary, came on a state visit in 1986 with a companion and was given the presidential suite at Rashtrapati Bhavan.

"Ortega had dumped his wife and brought this woman. She got full honours. There was really no problem and she went wherever he went," one former foreign secretary recalled. "It's no big deal really." Another diplomat said foreign leaders bring beautiful women listed in the official delegation typically as physiotherapists or doctors. "It is hypocritical to fuss over Sarkozy. He is open about his feelings and they may get married soon," he said. Sarkozy reportedly presented a heart-shaped diamond engagement ring to Bruni in December, less than a month after they met.

Officials say they will accord Bruni appropriate honours once the French, as is usual with visitors, decide how they want to deal with her status. They can devise plans around all possiblities—Bruni as presidential companion, Bruni as potential spouse, Bruni as just a member of the delegation. Indian protocol, for sure, will earn its keep on this trip, but the ball is currently in the French court. Indian diplomats deny they are in a "tizzy" over Bruni and say the entire story is a media concoction.

"If they treat her as the First Lady, so will we. Our system is flexible, but the French are sticklers for protocol. We are used to many different situations," an Indian official offered. "At one time, we had a bachelor prime minister, a bachelor president and a vice president whose wife was in purdah and we did without any official hostess." Bruni is not in purdah for sure. She has a famous relationship lineage—Mick Jagger, Eric Clapton, Donald Trump, Kevin Costner, besides one marriage and a child. She is a musician of some clout these days, having released her second album featuring poems of Emily Dickinson, Dorothy Parker, Yeats and Auden. In between her photo shoots as a model, she read Dostoyevsky.

Clearly not a svelte arm candy, but a case of beauty with brains. And an heiress to boot, coming as she does from one of the richest Italian families. Bruni's grandfather founded Ceat, Italy's second largest rubber and tyre company; her mother was a concert pianist. Bruni's father Alberto moved to France in the 1970s after the Red Brigade began targetting Italian industrial families. Bruni went to finishing school in Switzerland, then on to a successful career in modelling, earning $7 million at one point, before chucking it in 1997 and reinventing herself as a singer.

There is a possibility that Sarkozy may help solve the entire problem in one deft stroke by marrying his latest love before he comes to India, some insiders predict. It is not for nothing they call him "hyper" or "speedy". A whirlwind romance, a quick culmination with "I do" and a visit to the Taj Mahal to seal the deal—it is all plausible in the world of Sarkozy, who has termed his relationship "serious". If the two exchange vows, it would be the first time a French president marries in office. Sarkozy already has earned a first at the other end of the spectrum—he became the first serving president to divorce when he ended his 11-year marriage with Cecilia in October. Unlike Francois Mitterand, who kept both his mistress and an illegitimate daughter a secret while he was president of France from 1981-95, Sarkozy has chosen to be upfront about everything, raising more than many eyebrows in the crusty upper crusts of French society where affairs are discreet and overt displays considered gauche. 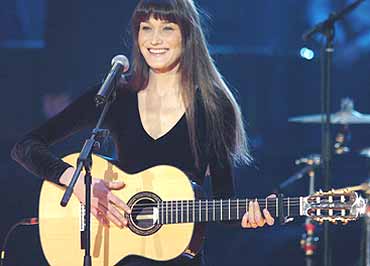 Bruni performs at a concert

The focus on Bruni may rob the visit of whatever substantive focus there might have been despite Sarkozy's emphatic declarations last week that he wants India as a permanent member of the UN Security Council and a full member of the expanded G-8 group of industrial nations. In reality, the big, bold moves in bilateral relations are stuck because the Indo-US nuclear deal is stuck—the French were to offer to build nuclear reactors for India. Another setback has been the cancellation of the Eurocopter deal while none of the other defence deals are yet ready to be signed.

But, as Mansingh says, it is important for India to be engaged with world leaders and every visit can't be measured in terms of agreements signed or documents delivered. So while the public attention may rest on the froth of Bruni's presence, President Sarkozy and Prime Minister Manmohan Singh will review issues of gravity in private.