Easy viewing for most but definitely too tame for any hardcore thriller buff. 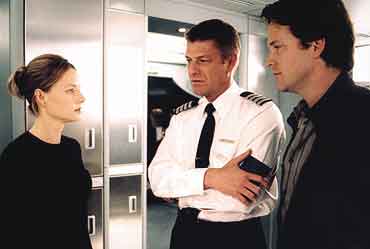 Flightplan opens with a promising premise. Kyle (Foster) is flying from Berlin to New York with her six-year-old daughter Julia and her husband's coffin. She snoozes off for a while only to wake up to a nightmare: her daughter's vanished mid-flight. What's more, the girl doesn't even figure in the aircraft's passenger list. So is she there on the flight at all or is Kyle delusional? From here on, the film could have taken off wonderfully along the lines of Hitchcock's tingling thriller The Lady Vanishes with the viewers going through delicious twists and turns to arrive at the final big discovery. Unfortunately, nothing much happens. What you get is a film that might be easy viewing for most but definitely too tame for any hardcore thriller buff.

Ms Foster herself is a big disappointment. You expect the sky from a performer like her, more so now that she is making such rare appearances. But her choice of roles is certainly questionable. Close on the heels of the mediocre Panic Room, she follows up with yet another anxious-mom act. As an actress she has no layers to explore in the single-note Kyle. Even a Pamela Anderson would have managed to play the role by just furrowing her eyebrows. As for the rest of the cast, they are purely supportive in the plot's scheme of things. An assortment of good and bad passengers, dour air-hostesses, a nice-guy captain (Bean) who wants to help but looks helpless and a beady-eyed air marshall (Sarsgaard) who keeps chasing Kyle with handcuffs and a gun to keep her in control as she runs riot in the plane in search of her daughter.

There's definitely no big deal to the plot. No great red herrings, no complex conundrums. The knockout revelation is something you'd have figured out even before things would have started turning mysterious. Some early parts could have worked. Kyle's husband's death, her trauma and hallucinations. The alternations between reality and illusion could have been intriguing but the filmmaker doesn't want to go on that track at all. Worst bit: the Arab passengers who look so totally automated and artificial that you know they can't be the culprits, 9/11 notwithstanding. Watch this only if you have a fascination for flying machines, the E-474 aircraft here is truly out of the world