Bihar is still Nitish’s battle to lose. But post-Ayodhya, the RJD-LJP team is making inroads. 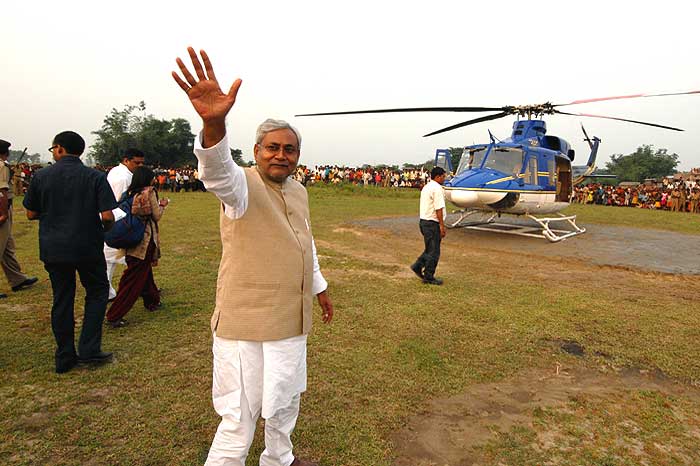 The carnival atmosphere of an assembly election is clearly missing. The Seemanchal region in north and northeast Bihar casts its ballot on October 21, the first segment of the six-phase poll, but there’s little sign of any hectic political activity. Even the quintessential loudspeaker blaring from streetcorners or rickshaws in support of party candidates—the visible (and audible) signpost of any sort of election frenzy—is conspicuous by its absence in the Bihari heartland.

The only confirmation that the state is in the middle of poll season is the sound of helicopters. The choppers fly out, announcing the day’s star campaigners to the quiet countryside. Travel by road is out of the question for the netas, given the distances involved. Time is of the essence here and, beginning his campaign on October 2, the first to take the aerial route was Lok Janshakti Party (LJP) chief Ram Vilas Paswan. Every morning he heads out from the state capital Patna in a chopper to Seemanchal and returns late in the evening.

Villagers in the area are only too happy to see the choppers. In fact, many of them confess that the only reason they attend a rally is to catch a dekho of the flying machine. Even party workers confirm that the chopper is a great draw in getting in the crowds. An RJD worker says, “Sometimes when we see that not enough people have gathered, we do two extra rounds of the village. That gets the people excited, enough for them to come running to where the rally is happening to see the helicopter.”

Paswan’s coalition partner this time around is again the Rashtriya Janata Dal (RJD). Chief Laloo Prasad Yadav follows a similar schedule to Paswan, addressing at least five rallies a day. The campaign begins at 9.30 am and finishes when his white chopper lands back in Patna at sundown. Many others too—like the BJP’s Sushil Modi, JD(U)’s Sharad Yadav and others like Ram Kripal Yadav, Daddan Yadav and Tariq Anwar—have become chopper campaigners.

Bihar chief minister Nitish Kumar of the JD(U), though, has kept a different campaign routine. Instead of flying in and out of Patna, he has been camping in Madhepura in Seemanchal since October 8. Eager to cover more ground, the chief minister catches as many as eight rallies a day in the 47 constituencies going to the polls in the first phase.  Nitish’s strategy to camp in the heart of Seemanchal is because the incumbent CM is in a straight fight with RJD supremo Laloo.

“The development work that Nitish talks about, it’s only on paper. I am not on the defensive....”
Laloo Yadav, RJD, Former chief minister

Nitish seemed well placed to retain power before the Ayodhya verdict. Now it no longer looks a cakewalk. The fight could be a tough one. Laloo’s focus on reviving the MY (Muslim-Yadav) combination and adding newer groups like the Rajputs has ensured the CM has a hard battle in his hands. After all, the state’s 16 per cent Muslim voters are decisive in about 60 seats of the 243 in Bihar. What perhaps helps Laloo is the timely renewal of his partnership with Ram Vilas Paswan. The Ayodhya verdict could be a deal-changer for Paswan’s fortunes. Muslims in minority-dominated areas like Araria and Kishenganj are now looking to vote for Paswan. Whether that affects the JD(U) or old claimant Congress remains to be seen.

Haji Manjoor, 65, a farmer from Hariya Bara village in Araria, feels it will be the latter. “We have always voted for the Congress. But after the verdict, we realised the Congress has done nothing to support us in the Babri case. The locks were opened when the Congress was in power, the idols were kept there when the Congress was in power, the mosque was pulled down with the Congress at the helm and now this court case....” While Muslims shy away from expressing anger against the Congress openly, dig a little and the balance of scale gets clear. Mehboob Khan, another farmer, says “the Muslim villages had had a meeting and decided that no one will vote for the Congress or the BJP. Our vote will go to the LJP.” The same sentiment gets repeated in other Muslim-dominated villages like Morbala, Khariya Basti, Sonapura, Haldia Gaon and Forbesganj. The Muslims could prove to be an important factor this time. Little wonder then that leaders like Nitish, Paswan and even Laloo ensure that there is at least one maulana speaking at all their rallies. 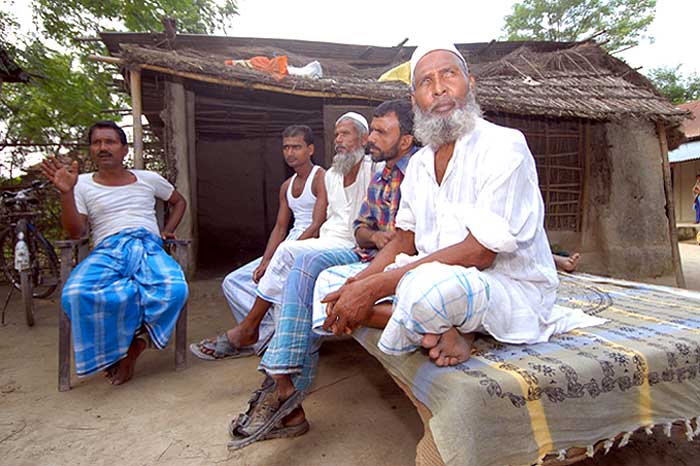 It’s not been easy going for Laloo either. So much so that despite Yadav support, for the first time a humbled Laloo is asking people to give him another chance. His earlier stint as CM—an innings fraught with accusations of misadministration, corruption and no development work—still haunts, but the RJD chief says he will now work for a better Bihar. “Mere pairon mein ghungroo bandha-de, phir meri chaal dekh-le (Put the anklets of power on my feet again and then see how I walk this time),” he urges at his rallies.

Nitish is dismissive of such statements. “People could not walk on the streets of Bihar after sunset during Laloo’s regime. Today, even women can step out. We convicted 50,000 criminals in the last five years. We have given people roads, education, employment and  empowered women. Laloo and Paswan have never had such a track record.”

This election in Bihar will be a complex contest. No one side may come out with a clear win. While Nitish may describe development as the “focal point”, he too relies on the old combination of caste and bahubali power. And not to forget, Nitish, despite having done a lot of development work in his Lok Sabha constituency of Barh, ahead of Patna, lost the seat in 2005.

Which proves yet again that ultimately caste considerations play a pivotal role in the Bihari psyche. No wonder then that while Nitish talks about development, he has openly indulged in social engineering, carving out a separate new section of the Mahadalits or the Most Backward Classes out of the existing Dalits that traditionally supported Laloo and Paswan. With Mahadalits having 36 per cent voteshare, Nitish has gone all out to provide special financial and employment packages for this section. This fragmenting of the obc vote is critical for Nitish since the upper castes, a traditional votebank of JD(U) ally, the BJP, has been upset with the CM’s agricultural land policies which favour giving sharecroppers right to land. The infighting within the BJP has further annoyed this lot.

As the RJD-LJP and JD(U)-BJP combines slug it out this festive season, the Congress party is quietly watching from the sidelines. The Congress has played it safe, going it alone in this election for the first time in 20 years. It has also carefully chosen more Muslim and women candidates, ensuring the vote for the other two combines at least gets divided. Political analysts say in that sort of a fractured mandate, the Congress could even come third in this election.

Whatever be the case, the merits of Jayaprakash Narayan statement from the 1970s—“Bihar’s electorate may be illiterate but it is not stupid”—will be evident on November 24 when the verdict comes out.