Dropping fares, more airlines to choose. The skies are crowding up, and it's more good news for Indian fliers. 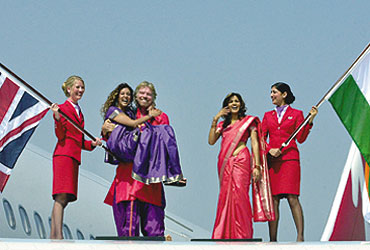 outlookindia.com
-0001-11-30T00:00:00+0553
Neha Kanoi of Tinsukia will not ring a bell in too many minds. But she is one of 5,000 lucky people who have actually lived out a wild dream—travelling by air for a mere Re 1 (plus airport tax). Now this may seem like a trick on par with the selling of the Taj Mahal or hawking Parisian air in plastic packets, but it isn’t. Thousands of others have travelled for Rs 500, and many more have flown at half prices as budget carriers and other airlines slug it out in a bid to woo flyers. There are other goodies too, like free 5-star accommodation and free travel for companions thrown in to spice up the bargain. For the first time, the flying customer is getting to feel like royalty.

Massive cuts in air fares isn’t the only excitement in the Indian skies. In the near future, 17 new airlines are promising to spread their wings; of these, seven (including IndiGo, Paramount Airways, Yamuna Airlines, and Palace in the Sky) are already procuring aircraft while others (like Visa Air, Air Excellence and Sky Blue) have submitted proposals to the civil aviation ministry. Ranging from small to big, the new players are likely to acquire five to 100 aircraft each. In fact, Indian private airlines were the biggest clients at the Paris Air Show, investing $13 billion to purchase 150 aircraft.

Low-fare carrier IndiGo (funded by InterGlobe Enterprises and Worldspan Technologies) is said to have placed an order for 100 aircraft worth $6 billion, though it ran into trouble because the company did not have a track record. The leasing business, whereby most airlines lease aircraft from global firms, has tripled out of India. Civil aviation minister Praful Patel says that 500 aircraft may fly in Indian airspace in five years and up to 1,000 in 10 years, as opposed to 180 today. Not to be outdone, foreign airlines are taking advantage of easing bilaterals to start more flights to India. While Continental Airlines has announced a non-stop New York-Delhi flight, British Airways plans to almost double the number of weekly flights (to five Indian cities) to 35 this winter, and reach a figure of 45 next year. Another British airline, Bmi, is already in India.

Competition is fierce, so no surprises that there’s turbulence in the air. Deals, m&as and takeovers are in the offing. A few months ago, Sir Richard Branson of Virgin Air was in India scouting for a partner. Initial talks with Air Deccan have failed though. Air Sahara says it’ll have a strategic partner—or more than one—in place by the end of this fiscal. And Kingfisher Airlines, owned by the UB group, is looking for a strategic partnership with any of the older domestic airlines.

Of course, it’s affordable air travel—as cheap as upper class rail fare—that has sparked off the recent boom. In 2003-04, the market grew by 10 per cent, followed by 25 per cent last fiscal, to rest at 18.6 million seats. The first half of this year witnessed a further increase of traffic by 22 per cent, or nearly five million seats. Saroj K. Datta, executive director, Jet Airways, estimates the year to end at 23 million seats—that would mean a whopping 10 million extra seats in just two years. Considering that 50 million passengers travel by second tier A/C on Indian trains, the potential for air travel is enormous if the price gap can be bridged further. Experts estimate that 100 million passengers might opt for air travel by 2012.

But the manner in which the Indian skies are crowding up is also reminiscent of the early 1990s when, amidst much fanfare, new players like Damania Airways, East West Airlines, NEPC and Modiluft entered the sector—only to vanish unsung a couple of years later. Among the private airlines, only Jet Airways and Air Sahara survived the fallout. Will we witness a sequel to that dismal air show, see a few more crash landings in the next few years?

Yes and no is the guarded answer from the industry. "The market will certainly see some closures and consolidation. But it will also align itself as per the global pattern where some airlines catering to the business travellers will operate alongside budget carriers, which will woo the leisure business travellers. The former may try to increase occupancy by wooing leisure travellers, but the business models will remain distinct," explains a senior manager at a leading private airline. 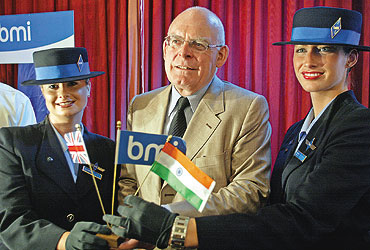 For example, Jet has emerged as the businessmen carrier with 85 per cent of its revenues coming from this segment. Others like Air Deccan will stay in the volume business. "We want to ensure that air travel is like the bus service," explains Capt G.R. Gopinath, MD, Air Deccan, who’s confident that fares can go down further. The success of Air Deccan, modelled on the success of Ryanair, is proof that budget airlines can thrive. "Air Deccan has already grown from four flights a day to over 170 flights a day, connecting 42 domestic destinations," says Gopinath.

However, there are several bottlenecks, the biggest of them being the lack of adequate infrastructure. The result: congested airports and chronic delays in both departures and arrivals. The civil aviation minister experienced this first-hand in Mumbai recently, when his aircraft didn’t get permission for priority landing. "Already, it’s becoming difficult to handle peak pressures in Delhi, Mumbai and Calcutta," admits a pilot working with a private airline. The situation in smaller airports is much worse.

At various fora, Patel has stressed the need for airport modernisation projects in Mumbai and Delhi, which together account for 50 per cent of the annual traffic, followed by Chennai, Calcutta and Bangalore, which account for another 20 per cent. He also wants to build greenfield airports in Hyderabad and Bangalore, even as Mumbai is likely to get a second one. Meanwhile, the airports at the smaller cities are being spruced up to ease the traffic to the bigger cities. But it’s all been bogged down by delays, political opposition and criticism from NGOs.

There are other concerns too. For one, the airline boom, much like the BPO and IT sectors, has led to a humongous growth in salaries. In fact, for crew members, especially pilots, it’s almost doubled. Two, the demand for trained staff and crew is enormous and experts aren’t sure whether there’s enough supply to fulfil the future requirements. Finally, the cost of aviation turbine fuel (ATF) is quite high. While ATF accounts for 15 per cent of the operating costs of airlines worldwide, the figure in India is nearly 50 per cent.

In the end, the state-owned Indian Airlines and Air-India may turn out to be the worst sufferers of this churn. Although A-I, which has increased its fleet from 26 to 42, plans to buy another 40-odd Boeings, and IA waits in the wings to refurbish its fleet, it may be too late for them. Both will suffer as foreign airlines eat into their profits from specific international routes. Private domestic airlines, which have also been allowed to ply such routes, will further dent their bottomlines. In addition, they are the ones most likely to lose trained staff to competitors. A shakeout is, therefore, imminent. But as the numerous airlines manoeuvre their way and engage in dogfights in a bid to survive, the consumer is likely to be the biggest beneficiary.