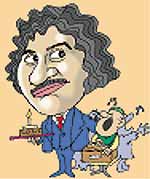 The big party this weekend will be for Roli Books head honcho Pramod Kapoor. He celebrates his 50th birthday with an evening of qawwalis...In Mumbai, it’s the unit of Boom that has been celebrating. After taking the producers to court for non-payment of dues, Big B finally made an out-of-court settlement and then turned up to finish his remaining dubbing work...Big B also ran into former daughter-in-law-to-be Karisma Kapoor on the sets of Zamaanat. The vibes were cordial, we’re told... 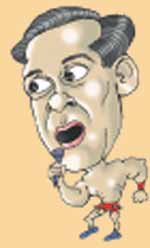 Talk of star pairs and we hear that Ajay Devgan will star with sis-in-law Tanisha in Tango Charlie...Meanwhile, music videos seem to be the new playground for our heroes. After Aamir, now Salman is all set to star in a T-Series music video called Tera Mera Dil. Will it be SRK next?...His priorities seem to rest elsewhere. The star has been working hard on his next film Kal Ho Na Ho, which may hit the theatres in November.

Pirates Of The Caribbean