India's new foreign secretary may have surprised his detractors. But how much can he do in eight months? 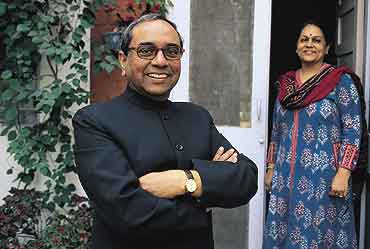 outlookindia.com
-0001-11-30T00:00:00+0553
On the morning of November 19, you had to only step into the C1/6 residence of Shashank at the Lodhi Gardens to know something important had happened: his Maltese puppy Cheeku was tearing in and out of the house, greeting a stream of visitors who had come to felicitate the master of the house. The phone was constantly ringing: there was Arun Shourie on the line, then Suresh Prabhu. And each time Shashank took the call, he said effusively, "Thank you, thank you." You, obviously, knew what the fuss was all about: the evening before Shashank had been designated as the new foreign secretary, defying rumours of an extension to the current incumbent, Kanwal Sibal, now to retire as per schedule by November-end.

In a world where appreciation and allegiance change depending on who is writing the bureaucrat's confidential report, it wasn't surprising then to spot a few of Shashank's detractors arrive at his house with bouquets. And detractors he had quite a handful, many of whom were convinced that the coveted post wasn't to be his. For months there were rumours that Sibal would continue until March next year, and then succeed Lalit Mansingh as India's ambassador in Washington. And didn't Shashank have only eight months in service left?

These speculations gathered momentum at the decision to reappoint Savitri Kunadi as India's ambassador to France after she retired. This, it was said, had set a precedent for extending the tenure of Sibal, known for his brutal candour that was often expressed pithily—and usually misconstrued as brusque. It's hard to tell what nixed his chances for an extension, but what is known is that Prime Minister Atal Behari Vajpayee signed Shashank's appointment order before he took off for Russia on November 11.

Shashank will be India's first foreign secretary without a surname. "My father, Madanmohan, didn't believe in surnames," says Shashank. Neither Shashank nor his five brothers have surnames, opposed as his father was to caste names. His father printed a journal, Nishkam, of infrequent periodicity. "But Premchand gave it a good review," Shashank points out. At 18, he completed MSc in physics from Agra University and taught for three years at Meerut College before joining the Indian Foreign Service.

His detractors also said that Shashank would be pipped to the post because he never served as ambassador in 'important' countries. But Shashank says that through a string of assignments he concentrated on economic aspects. As ambassador in Tripoli, he ensured Libya paid its dues of over ten years amounting to $45 million through oil. And when he was in Seoul, South Korea became India's number one investor (in 1996), rising from a meagre $30 million to an impressive $3 billion.

But won't eight months be too short to carry out his agenda? Says he: "It is not really a short period of time but a continuation and climax of 37 years of service." Yet there's no denying that a fixed tenure has its advantages. The Lambah committee, appointed to make suggestions on revamping the MEA, too recommended a minimum tenure of two years for foreign secretary whose selection should depend on merit and performance and not just seniority. "The government in due course has to take a look at the fixed tenure principle and a decision can be taken in principle," Shashank argues. Now what has to be seen is whether Shashank becomes the first beneficiary of this recommendation.