Nehru's grandpa was Delhi's kotwal? This and other gems in this fine coffee-tabler. 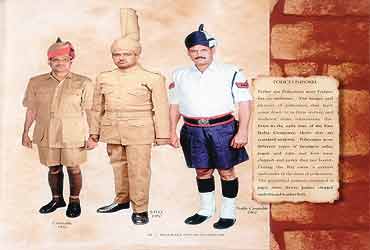 This is a most unusual book. It is not often that a police force, burdened with dealing constantly with the worst aspects of human nature, has time to retrospect on its history and heritage. It is an achievement to have created a well-produced book with stunning photographs and readable archival material going back two centuries to when the British entered Delhi in 1803. Historical references have been located to identify kotwals of Delhi going back to the 13th century, among whom was Ganga Dhar Nehru, Jawaharlal’s grandfather who was appointed in the "first half of the 19th century". The relative unimportance of Delhi in the civil set-up can be seen from its attachment to the North West Provinces for its administration, while being under the district headquarters at Agra. Interestingly, the first divisional commissioner and chief of police was the tireless William Fraser. The book omits his more sensational details such as his preference for the angarkha and his attachment to his four Indian bibis.

Readers of this fine book might at first be dissatisfied at not finding explanations in a Delhi Police book for the horrible traffic snarls, or why there appear to be more traffic policemen around Race Course Road than around the chaotic Dhaula Kuan flyover. The answers might be found in the next book they publish, but this one is really only about their heritage. Quite hilarious is the account of Jyoti, son of Chuhe Mal who in 1897 had his pajamas stolen by Ram Dayal. The miscreant was caught with (in them?) the pajamas by constable Man Singh, brought to the police station and awarded five lashes—case disposed. Quite honestly, why can’t we bring corporal punishment back? Can anyone imagine Ram Dayal being dealt his punishment today in less than two years with our ‘enlightened’ system of dispensing justice? During that time he would probably be in jail as an undertrial.