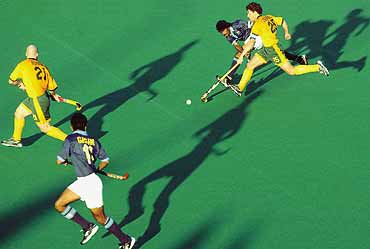 The evening before our hockey team returned home last week after winning the three-nation tournament in Australia, the Indian Hockey Federation (IHF) put out a press release urging the media to turn out in full strength to give our heroes all the publicity they deserved. The media throng turned up at the Delhi airport all right. So did the IHF officials, including federation President K.P.S. Gill. It is not everyday that an Indian hockey team comes back with an international trophy, that too after beating teams like Australia and Pakistan. To add to the feeling of satisfaction, just before this spectacular win they had finished second in a three-nation-four-team event in Perth which had two Australian sides.

The team was the toast of its fans at the airport. There were garlands and sweets for the players, and bhangra in the air. Then the interviews with the media. The celebrations and interviews over, the officials returned home in their cars, while the handful of players—most of them Punjab-bound as the others dispersed from Chennai and Bangalore—were herded into stuffy Rs 600-a-night rooms in a dingy Paharganj hotel. The euphoria over the win abruptly evaporated.

Ironical, because the IHF seems to be finally on the right path to put together a world-beating side. From good team combinations to regular competitions to commando training for improving fitness levels, it has taken a series of right decisions. But the mental well-being of the players still does not seem to figure in their scheme of things.

This, even after India played eight games in 12 days, won four, drew two and lost two. The two losses were both to Australia in the first tournament in Perth. India beat Pakistan and Australia once each and two wins came against Australia 'A'. On paper it does not seem to be all that great, but the bottomline is that there is some silverware...