Fireballs In The Sky 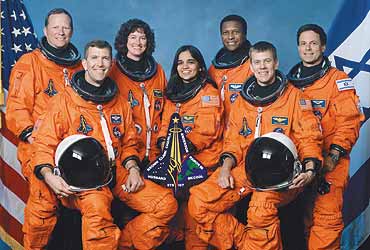 outlookindia.com
-0001-11-30T00:00:00+0553
A week after Columbia disintegrated before a disbelieving world, it still remains a mystery as to what exactly went wrong with the space shuttle that was all along regarded as a marvel of space engineering. The tragic crash claimed all seven crew members on board, including Karnal-born astronaut Kalpana Chawla. The shuttle was returning after a 16-day mission in space.

Preliminary investigations have zeroed in on a piece of insulation which chipped off from the shuttle shortly after lift-off. While NASA engineers had initially dismissed it as "inconsequential", later they realised it could throw new light on the crash. Now senior scientists at NASA, including programme manager Ron D. Dittemore, are talking about redoing the whole analysis.

The insulation broke off from the shuttle's external fuel tank and was roughly the size of a 20-inch television screen, six inches thick and weighed a little over one kg. Space shuttles are covered with an external lining of heat-resistant tiles which provide insulation from the extremely high temperatures of over 1,600 degrees Centigrade (subjected to during its re-entry into the earth's atmosphere).

Scientists say even minor damage in the thermal tile casing can be disastrous since it disturbs the aerodynamics of the shuttle, impacting all systems. This is what supposedly happened to Columbia during its 28th mission. Scientists say the inner aluminum core left exposed proved to be vulnerable at the time of the spacecraft's re-entry.

So far these are only assumptions and one will have to wait till the NASA probe concludes for the exact cause. The space agency has confirmed that just before the crash the left wing had shown a sudden rise in temperature and the damage may have led to the crash. But what was seen over the skies of Texas was a comet-like object that came close enough to be seen and even heard. The Columbia exploded, turned into a fireball trailed by a fusillade of debris as it disintegrated some 2 lakh feet above the ground.

In the wake of the Columbia tragedy, NASA has for the time being put its manned space missions on hold. The ill-fated mission had accomplished its mandate of conducting over 80 experiments in space. In fact, the shuttle was transformed into a round-the-clock laboratory in which the crew carried out experiments relating to physical, life and space sciences in micro-gravity conditions. While US navy captain David Brown and navy commander Laurel Clark carried out biological experiments, Kalpana (on her second space flight) conducted a dozen experiments on combustion and fire suppression. The mission also had a first-ever Israeli astronaut, Ilan Ramon, along with naval commander pilot William McCool, payload commander Anderson and shuttle commander Rick Husband.

For millions of Indians who watched the Columbia crash on TV, the grief was almost personal. The nation lost its only woman astronaut who US President George Bush described as one among the Columbia crew who travelled the longest path to space from distant India.

Kalpana's past was not that of a person who would rise to such prominence. From small town Karnal where she was born, the school she studied in, her family background, nothing suggested it. But she literally had a meteoric rise. Also, she never forgot India. Among other things she carried with her on Columbia was a Nehru Planetarium banner and her school flag.