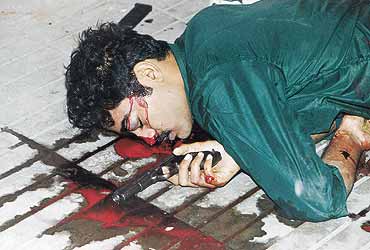 outlookindia.com
-0001-11-30T00:00:00+0553
It finally took a doctor's statement to the media for serious doubts to be raised about the Delhi Police's version. The whistle-blower wasn't any human rights activist but Dr Hari Krishna who runs a clinic in the capital's upscale Greater Kailash area. He claims to have been in the basement of the Ansal Plaza shopping mall on Diwali eve, witness to a police posse gunning down two "unarmed" men in cold blood. The Special Cell involved in the operation later claimed it was a terrorist encounter. The Krishnas had just finished their Diwali shopping and the doctor had gone down to pick up his car from the underground parking lot. He saw plainclothesmen encircling two unarmed men and firing at them indiscriminately at point blank range as they staggered out of their car. Dr Krishna says the gunfire lasted barely a minute. The police claim there was a fierce 15-minute gun battle.

Now reports doubting the credibility of the doctor's statement have begun to surface. The very fact that he was present in the basement is being questioned, on the grounds that there is no entry in the parking lot register of his Toyota Qualis. However, any number of vehicles are known to enter the basement parking in a disorganised manner. Dr Krishna has been described as a "history-sheeter" and a "quack" whose sons have a case of attempted murder registered against them. When contacted by Outlook, Dr Krishna said it was true that firs were filed against him and his family but added that he has also filed counter firs. As for whether he was present at the Ansal Plaza basement he had this to say: "If I say one more word on the operation, I will be murdered..." However, two days earlier he had reiterated to this magazine that he had actually witnessed the shooting.

Dr Krishna's sensational testimony now stands in the way of the Delhi Police claim that it had carried out one of its most effective anti-terrorist operations. Officials were quick to point out that despite there being hundreds of Sunday shoppers in the mall, no one was hurt. This, they say, was possible because of meticulous planning and clock-work efficiency. The 25-member crack unit of the Special Cell had taken vantage positions in the basement and gunned down two members of the Lashkar-e-Toiba (LeT) who, the police claim, had opened fire from their two Chinese-made pistols.

Even deputy prime minister L.K. Advani, who visited the scene, praised the police action. He also seemed convinced that the terrorists were carrying out the strike at the behest of Pakistan to trigger off communal violence. "We have had intelligence inputs in the past few days that terrorists have been told by their masters to choose days and places which could spark off communal violence. The terrorists chose Diwali eve to send a message," Advani said.

But is the Ansal Plaza operation really a feather in the cap of the Special Cell? Even if one discounts Dr Krishna's account, there are enough gaps in the police version which put a question mark over the genuineness of the operation. And some of the questions for which they are yet to provide answers:


In his testimony—reported first in the Delhi eveninger Delhi Mid-day and then a daily—Dr Krishna minced no words when he said the two men were "unarmed" and were "shot dead" by the police. Furthermore, he claimed that while alighting from the car they were "barely able to walk".

By his reckoning, they had either not slept for several days or were sedated. He also pointed out that the two terrorists were not carrying a bag, as claimed by the police, and were empty-handed. To cap it all, Dr Krishna said he was not allowed to speak when police officers briefed TV crews who rushed to the mall after the encounter.

While talking to Outlook, Dr Krishna refused to go into details about the evening of November 3 but said he stood by his statements. The police, on the other hand, debunk his allegations. "You think we could fake an encounter like this in such a crowded place? How come the other eight or more shoppers in the basement have not come forward to support the doctor's version?" asks a senior police officer.

In fact, the police is convinced it was a successful operation which had achieved its objectives. This, despite the NHRC notice issued to police commissioner R.S. Gupta asking for details of the "encounter" and directing the police force to provide security to Dr Krishna.

Officials are also hopeful of tracking the terrorist network to which the suicide squad belonged from a diary recovered from the slain militants. Says Neeraj Kumar, JCP, "We got some positive leads while examining the entries and will soon come out with full details." The police also maintains that it had been tracking the movements of Abu Ahas and Ejaz Ahmad, the two militants, for over three months. "We laid traps and had come close to nabbing them on at least two occasions," said Gupta. The Special Cell also has precise details of their movements in J&K, western UP and Maharashtra. However, the Thane police have denied any knowledge of this. Thane commissioner S.M. Shangari said there was no evidence to suggest the militants had lived in his district in Maharashtra.

But despite the confident posturing, there is still a cloud of suspicion that hovers over the entire operation. "If their actions were above board and the police had nothing to hide, it would have been more transparent," says an ex-cop who used to be involved in counter-insurgency operations.

The official explanation on why the militants chose to carry limited arms and ammunition (one AK-56 rifle, two pistols and just 60 rounds of ammunition) if their objective was to cause maximum damage is that earlier suicide squads carried even less arms. Says Ashok Chand, DCP, Special Cell, "In the two previous attacks in the capital, on the Red Fort and on a CRPF camp, the militants did not carry any explosives and left their ammunition behind."

The many unanswered questions have put the police in an embarrassing situation. The onus now clearly rests with them to show some more transparency, considering that an increasingly curious public has also begun to raise doubts.

Flux Of The Matter