Finger Off The Paper 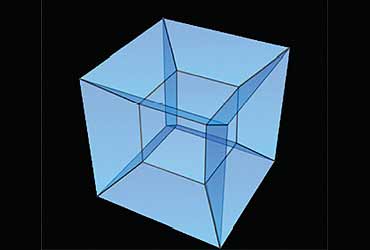 outlookindia.com
-0001-11-30T00:00:00+0553
You can't see it, you can't touch it, but it's everywhere, all around you. It's hyper-space, the fifth dimension...and it's right under your nose. But first, what exactly is a dimension? Think of it as a coordinate. You appear to live in three dimensions because it takes three coordinates, three numbers, to locate you. It could be longitude, latitude and your height above sea level. Or, to find a buried treasure, you might say walk ten steps north, five steps west and dig six feet down. However you do it, three numbers suffice to specify position and that's why the world appears three-dimensional.

It's natural also to think of time as a dimension. As Hermann Minkowski, Einstein's maths teacher in college, put it, "Nobody has ever noticed a place, except at a time, or a time except at a place." To arrange a get-together with your friends, it's not enough to give them the three spatial coordinates of the location; you also have to say at what time. That's one more number, so chalk up time as the fourth dimension. Actually, there's more to it than that. Imagine the four directions: left-right, back-forth, up-down and past-future. In 1905, Einstein showed that just as what we mean by left and right depends on which way in space we are facing, what we mean by past and future depends on which way in space-time we are facing. That may not be obvious but, by uniting space and time, it does justify our inclusion of time as another dimension.

So we have four so far. What about the fifth? Our minds cannot directly visualise more dimensions. But luckily, there's a clever trick we can use to aid our imagination. A fourth dimension of space (that is, a fifth dimension of space-time), sometimes called hyperspace, must appear to us 3D beings much as a third dimension would appear to a 2D creature. To imagine what hyperspace would look like to us, imagine what we look like to a flat amoeba living on a 2D sheet of paper. (This would have to be a most intelligent amoeba, of course.) For example, where is hyperspace? Answer: it's all around us, just as 3D space is all around a 2D piece of paper. Is it different from ordinary space? No, it's just another direction. What would a being from hyperspace be able to do? It would have the god-like ability to reach into your body without going through your skin, in the same way that you can touch the centre of the 2D amoeba without going through its edge, simply by raising your finger off the paper.

Well, that's all fine in the abstract, but does hyperspace really exist? Nobody knows for sure, but for close to a century physicists have seriously contemplated its existence. String theory—our best theory for describing matter, forces, space and time—boldly asserts that there are as many as eleven space-time dimensions! These 11 would include not only our familiar three space and one time but also an additional seven dimensions of space, all waiting to be discovered.

If they're there, the obvious next question is why we haven't seen them yet. There are two possible explanations. One is that hyperspace may have only the tiniest extent. Just as our amoeba might mistakenly think that a piece of paper is purely two-dimensional only because its third dimension—along its thickness—is so limited, we might simply have failed to observe that all around us is a thin sliver of hyperspace. The fabric of space-time, like the sheerest of silk chiffons, may have only the most imperceptible thickness in the other dimensions. If this is true, you shouldn't plan to spend your next family holiday visiting hyperspace.

But, in 1999, physicists Lisa Randall and Raman Sundrum proposed another explanation. Maybe the other dimensions were not so small. Instead, they suggested that the reason we haven't seen them is that we are stuck to our three dimensions. Just as the amoeba is stuck to the paper by the force of gravity, so too we—along with everything else in our familiar universe—might be confined by a force to our familiar dimensions and be prevented from entering the other dimensions that are all around us. Excitingly, this theory can be experimentally tested. This time next year, a giant experiment near Geneva will try to find evidence of hidden dimensions of space. If we find them (a big if), it will be one of the most sensational discoveries in human history.

That Tamarind Was Sweet