Such a beautifully formed world that you willingly submit to the manipulation and creative licence of Foster. 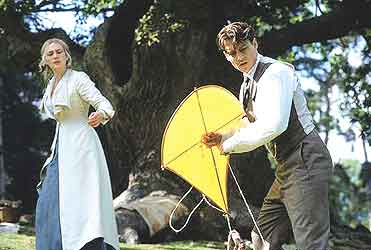 In a scene from J.M. Barrie's play in the movie, Peter Pan sprinkles fairy dust on the disbelieving children and sends them flying to Neverland. It is a perfect analogy for the Oscar-nominated film, which requires serious suspension of belief, but once the fairy dust settles on you, it completely delights and hardly fails to wring out tears.

Finding Neverland has Depp as writer J.M. Barrie, a boy trapped in an adult world, including a loveless marriage. He meets Sylvia Llewelyn Davies (Winslet), expressly widowed for the film, and her four boys at a time when he is under pressure to produce a blockbuster play after a recent flop. Davies and her boys bring infectious warmth to Barrie's life and he in turn suffuses their world with the magic of childhood fantasy. Depp draws them into a rich make-believe world of pirates and cowboys and teaches them to fly kites. The fantasy that Barrie tries to retrieve for the children is filled with a sense of delight, has rolling lawns and summer sun, but it is underlined by a sense of loss that hangs over the boys, particularly Peter. As Barrie gets more deeply involved with the Davies, he also withdraws further from his social-climber wife, Mary (Radha Mitchell), and from the rest of society that by now is chattering about his love for a widowed Davies and her children.

The world of Barrie and the boys is a gorgeous fantasy but an incredulous one too. Barrie's life may not have had the creative purity as is made out. He was dogged by allegations of paedophilia. So the film is tepid and chaste in some ways and Winslet's role and her relationship with Depp is strangely underwritten. But it is Barrie's relationship with the Davies children, particularly the melancholic Peter, that makes the film. By the time he stages the now classic play, Peter Pan, based on his time with the Davies at a sick Sylvia's home, it is hard not to fall completely in love with his world. The Davies struggles go on but they find Barrie's world to retreat in to.

Depp plays the whimsical, Scottish child-man as straight-laced but hiding a wonderful world in his mind like only he can. He is matched completely by Freddie Highmore as the quietly troubled Peter Llewelyn Davies. Both Barrie's wife Mary and Sylvia ask him to be transported to Neverland. It is such a beautifully formed world that you willingly submit to Forster's manipulation and creative licence.