Over 3,000 'Pakistanis' have have been allowed Indian nationality in Bhuj. But there are scores still waiting. 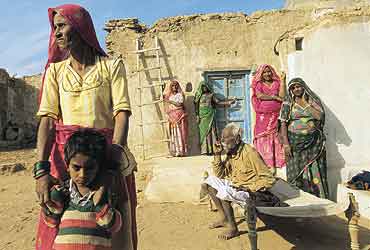 outlookindia.com
-0001-11-30T00:00:00+05:53
Having your paperwork in order is everything in a country like India. That would make Rajkorba Jadeja, a housewife from Biber village near Bhuj in Kutch, a non-person. She has green Pakistani papers by way of a passport, but it expired in 1989. Meanwhile, she has no Indian passport, ration card or election card, doesn't count in the census, can't vote or buy land. Welcome to the limbo land of the bizarrely hyphenated Pakistani-Indian.

For Jadeja isn't alone. There are several thousand people, mostly women, who for years have led stateless lives in the country's border regions like Barmer in Rajasthan and Kutch in Gujarat. Only in recent weeks did they stop being invisible to Indian officialdom. In the past few weeks, over 3,000 people have gained Indian citizenship, after the government decided that Pakistani Hindus who had lived in these areas for over five years could get Indian citizenship.

Pakistanis in the area, both Hindu and Muslim, had been struggling to get Indian citizenship for decades, occasionally in near desperation. Vidya Trivedi's father, for instance, who brought her here several decades ago when she was a child, was known for accosting any visiting dignitary in Bhuj, including former deputy PM L.K. Advani, asking them to make her an Indian citizen. It finally came through days after he died. And Hindu Singh Sodha, who came to India in 1965, set up one of those "only in India" things, an association of Pakistanis who want Indian citizenship.

These poor housewives, labourers and workers are the remnants of what locals say was once a flourishing trade route, on camel-back, between these areas and adjoining districts in what has since became Pakistan. But travel between these regions virtually died out after the Kargil war. There were many women who came here to get married. Most of Biber's brides, like Nanduba who came decades ago, are from Pakistan. Many of the Pakistani brides knew when they got married that they were walking into something of a black hole. No one who crosses over is heard from or comes back easily. Virbai's brother came from Pakistan to marry an Indian girl. She has never been back since and Virbai has not either. Instead, they have learned to speak Kachhi rather than their native Thari, learned to wear sarees and enjoy cable television.

Nanduba and her Indian husband Arjun Singh Jadeja see themselves as the same people divided by a desert and then, a border. Except Nanduba is officially invisible; to India because it might see her as a security threat; and to Pakistan because she is an improbable anomaly it simply wants to wish away.

Pakistan foreign ministry spokesman Masood Khan told reporters that no Pakistani would opt to live in India since "Pakistan is a land of opportunities". He terms reports of Pakistanis turning Indian frivolous, concocted and ridiculous, even "part of a disinformation campaign". He said his government would probe the matter. So, that's official line.

Of course, Biber's largely illiterate Pakistanis know nothing of this. Fatimabai Issaq Ganchi came to Bhuj 25 years ago as a young bride. She is now a grandmother several times over, but she has not been back home in all these years. Her smile wavers a little when she says she couldn't go back when her parents died. Others talk of births, weddings and sicknesses, and miss the gawky brothers they left behind, now turbaned and mustachioed men whom they have only seen sitting stiffly on brocade bedcovers for formal family photographs.

It is a strange situation to be in. Like awkward teenagers, they try to fit in but never completely belong. Muro Mungo, who shines shoes in Bhuj, has become a leader in his community of shawl-makers. He has a ration card and has voted, which should be of some interest to the ministries of external affairs and defence—there are hundreds of such people in Kashmir. But Mungo thinks all this has happened because he is a "nice man," and it will help him get an Indian passport quicker. 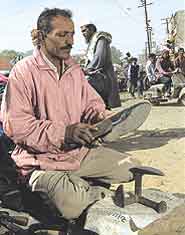 Others have learned Indian embroidery and sell their work cheap to middlemen because they cannot officially be in any of the savings groups run by the large ngos that now work in the area. It is a world of affidavits, forms, agents, lawyers and government officials. For them the difference between their lives and officialdom is bigger than between India and Pakistan. Fatimabai's husband, Nanduba's husband and others, including Mungo, have been to the Pakistani embassy in Delhi. But they don't understand the Urdu in which they are spoken to there. They don't understand the forms that are filled up on their behalf and none of them could explain the procedure involved in becoming Indian.

But being Indian is the thing they want most. Most of them lived in poor rural communities in Pakistan, are barely educated and seem barely connected with Pakistan as Indians know it. While most are from the desert district of Tharparkar, not a single one knew that it does not exist anymore because it has been divided into two districts.

But in the "globalisation is cool" age, they are unwittingly and almost unhappily cross-cultural. They live in similar desert cultures but across what seems like an iron curtain to them. The odd letter that does make it from Pakistan is written by local school teachers in Sindhi, which they do not understand. Meanwhile their letters are written in Gujarati by their school-educated children, which their Pakistani families don't follow.

In Biber, wedding sangeets are done Pakistani style. It is the one day that all the Pakistani brides across generations wear their traditional trousseaus unapologetically and do traditional dances set to Thari songs. The next wedding is set for just days after the collector starts giving them Indian citizenship. The songs will be in Thari but it will be a double celebration.

It's almost as if they can restart normal life years after someone hit the pause button and then forgot all about it. The widowed Koruba wants to open a bank account so that she doesn't have to depend on her children for money. Rajkorba is convinced that her English-educated son will then be able to take her across the border to meet her family one more time. All Virbai wants is to feel like she really belongs and not have to pay agents to make her someone that she already feels she is.