Like most good animation films, the appeal transcends the age divide

More from Namrata Joshi
View All 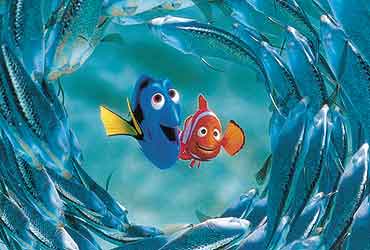 Like most good animation films, Finding Nemo's appeal transcends the age divide. Pixar Films' computer-generated sea creatures and the vast expanse of the ocean are straight out of any child's fantasy. The adventures of clownfish Nemo and his father Marlin hold them in enchantment and occasionally send their collective pulse racing, like when Marlin gets trapped in a school of stinging jellyfish. Marlin becomes a cautious father after losing his wife, Coral, and 399 of their 400 eggs to a shark attack. It's with a lot of trepidation that he takes Nemo to the school and the very first day itself the kid-fish is whisked away on a trip to "drop-off", the point where their reef opens into the deep ocean. Here Nemo defies the watchful father to swim up to a boat from where he gets scooped up to the aquarium of a dentist who eventually wants to gift Nemo to his nasty niece Darla (her meanness defined by the Psycho track in the background). Meanwhile, Marlin embarks on a mission to save Nemo and in the course of his journey from The Great Barrier Reef to Sydney, he meets several interesting creatures, including Dory, the fish who can read English but has a severe memory problem.