"Film Exports Is Our Priority"

It's the government's turn to launch a cinematic offensive on the world; Cannes may well be a beginning. 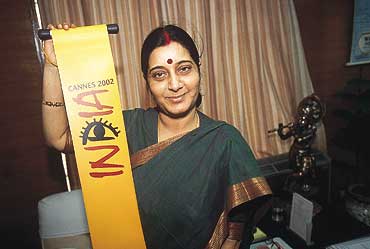 Why such a huge splash at Cannes?
We want to promote Indian film exports. Cannes is not just the biggest film festival but also the largest market. It's an opportunity to project India in a focused manner.

How does this year mark a departure from our previous Cannes outings?
India's participation had been limited to one NFDC stall. We used to send the Indian Panorama movies to them to choose from. There was individual participation from directors like Satyajit Ray and Shaji Karun. Last year, for the first time, we set up an Indian pavilion, a one-window enquiry. This year it has doubled in size. There's also a joint participation by the industry and the government. FICCI and CII have contributed Rs 30 lakh. It's a quantum jump in participation.

What will be the festival highlights?
From May 20-23, it'll be four days of an Indian flavour at Cannes. It's the first time a tribute is being paid to an Indian film person, Raj Kapoor. Devdas will be the first commercial Indian film to have its world premiere in the special section. While the RK films are 50 years old, Devdas is the absolutely new face of Indian cinema. So people will be able to chart our cinematic journey—from Raj Kapoor to Shahrukh Khan. It's also the first time that a Khoj, Tridip Poddar's graduation film, will be shown in the students' film section.

Aamir Khan's aggressive promotion of Lagaan showed how marketing matters. How are you addressing the need?
In the era of globalisation, brand-building matters. We have evolved a special logo for India's participation in all international festivals. As a minister I have to create brand consciousness not just for Bollywood but the entire diversity of Indian cinema.

But the thrust at Cannes seems to be on our commercial films...
Traditionally Indian cinema at Cannes has not been from Bollywood but I'm glad they're recognising our mainstream films. I've never distinguished between art or commercial cinema; there can only be good or bad films.

Why a sudden interest from the government in the film industry?
At a time when the Indian economy is going global, its new facet is ICE (infotech, communications and entertainment). The entertainment industry is at par with the IT sector. It generates employment and also contributes to economic growth. Even the 10th five-year plan recognises its potential. In the transition from the traditional to the new economy, the entertainment sector holds the key and if an I&B minister doesn't recognise this, we'll be left behind. We should not just be policymakers but proactive facilitators. Promotion of film exports is our priority. When I took over as minister, film exports stood at Rs 250 crore, the year after they went up to Rs 400 crore. Last year they exceeded the Rs 900-crore target.The Directorate of Film Festivals was earlier only involved in cultural exchanges. For the first time it's been given a mandate to promote exports. Rs 1 crore a year has been kept aside for exports in its budget.

Is the craze for Indian cinema abroad genuine or a passing fad?
It's the beginning of the recognition of Indian cinema. Cannes is paying homage to Raj Kapoor. The Locarno film festival wants to organise an Indian summer. The British Film Institute is organising a month-long session of Asian films with an India focus. Earlier, our base outside was West Asia, South Asia or the NRIs in the UK, US and Canada but now even non-traditional markets like Latin America and Europe are embracing us.

But isn't there a danger here of neglecting our own markets?
Why? They are our goldmines, the newer markets are the additional avenues.

How do you intend taking the Cannes effort forward?
If you make a beginning, things start moving with their own momentum. Humko to sirf dhakka lagana hai. Today we have 40 delegates, next year it could go up to 80.