Fill In The Blanks

The Muslim on the street is bitter, but more than the US he blames the state 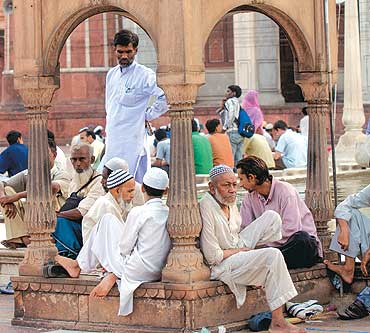 Damned if we do, damned if we don't. That is the Muslim view mostly when asked about their support to the Manmohan Singh government on the nuclear deal. In the old city of Delhi, the area around the historic Jama Masjid, there is a palpable anger against what the Muslim residents see as this government's apparent embrace of the US. For those Delhi intellectuals and policy wonks who argue that complex foreign policy matters are not understood by the toiling masses, they need only travel a few kilometres into the old city. A stroll along the narrow, crowded lanes of the Jama Masjid would be instructive.

For this correspondent, it was an eye-opener. I had set out expecting a mixed response. Most people, perhaps, would be indifferent. Some would say they hate George Bush and therefore would not like the government to strike a deal with America. Having spoken to Muslim clerics and politicians in the past—who are overwhelmingly against the deal—I expected the aam aadmi to be less clear, less concerned and less forceful.

Instead I got an earful, when the shopkeepers and residents of Jama Masjid did open up (after some persuasion) on a sultry July afternoon. The Urdu Bazaar, located opposite the mosque, is always a good place to start. At the first shop, the well-known M. Rashid and Sons, an aged Ehsan ul-Haq smiled enigmatically and said: "We all know what we feel but I don't want to say anything that has a political context. But you should know, you are a Muslim."

Problem was I did not, having never seen myself as Muslim first. But living in a place with clear demarcations of Hindu and Muslim streets does determine a mindset. At the Kutub Khana Aziza, a small bookstore, a group of men have collected. They are at first reluctant but then start opening up. "The world is troubled by what America is doing. Why should we not be troubled?" asks a man who clearly has some authority over the shop but refuses to give his name. Do people understand what the deal is? "Jaahil se jaahil aadmi samajhta hai (Even the most ignorant man understands)". 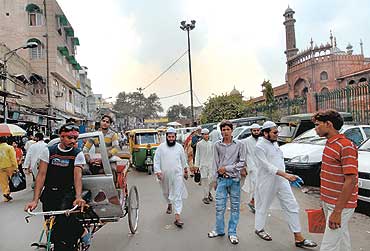 Which side, please: Delhi's Walled City has its markers

The problem, it seems, is that Bush has become the face of America. One Mohammad Hanif interrupts the conversation and asks, "Madam, you are an educated Muslim. Do you believe the US will attack Iran?" When I ask if they would be less hostile if Barack Obama were to become president, Hanif responds that if the US stops killing Muslims in Iraq and Afghanistan he would have no grouse against Americans as such.

The conversation livens up when another man adds with a laugh, "Why should we get personal about America when our own government is hostile to us." So he thinks the UPA is hostile to Muslims? "Yeh log apni qaum ke liye kuch nahin kar sakte, hamari qaum ke liye kya karenge (These people can't do anything for their own community, why would they do anything for us)," says a shopowner. But isn't it better to have the UPA as opposed to the BJP? "Which world are you living in? They are all thieves. Manmohan gave crores to the Sikh riots victims but has any Muslim got anything? No. The world has changed from when we voted for them only out of fear for the BJP. Now we know there's no one who supports us. Only Allah."

After this bitter sermon, I leave and turn right into a lane known for, among other things, the original Karim's restaurant, famous for the best kababs and curries in the city. Inside Karim's, a member of the family that owns the chain says, "We are business people and don't like to get into politics. But I know people here feel that America is targeting Muslims across the world." A customer, the prosperous-looking, rotund Mushtaq Mian, strikes up a conversation. He says bluntly: "I think we all know that if someone is going to make money, if business houses and US companies will make a profit, then the deal will be signed. That's all. It's all about money, madam, and if the Muslims suffer in the meantime, who cares."

There are other voices. Inside the mosque some people look blank when I mention the deal. A bearded man running a stall selling knick-knacks says he knows nothing about such matters. Clearly, the rickshaw pullers, homeless children, beggars and fakirs who wait outside the many restaurants for a share of the food (some devout Muslims are diligent about giving to the poor) would have no idea about such matters of state. But what is astounding is the number of people who do.

As I leave the old city, I realise the strong feelings about a deal with America are part of the larger ongoing process of disillusionment of the Muslim community with the Indian state itself. A community, whose vote is decisive in several LS seats, has understood well the neta's charade. Indeed, many are more bitter about the so-called secular parties using and discarding them over the years. "The BJP is openly against us. At least they are honest about it," Javed Alam, a chat stall owner, shrugs.

It is impossible to predict how this sentiment would impact the voting pattern of Muslims when the general elections finally do take place. Clearly, in a straight BJP-Congress contest, the choice is limited. Yet, if this trend continues, it's possible that many Muslims will not vote at all or will give their votes to independents and small parties who would act as spoilers for the Congress. Many Muslims are asking—if our opinion doesn't count, why should you expect our vote to count in your favour?