Fifty-Six, Pick Up The Sticks

Politics over Lalitgate may yet shape the future Modi cabinet 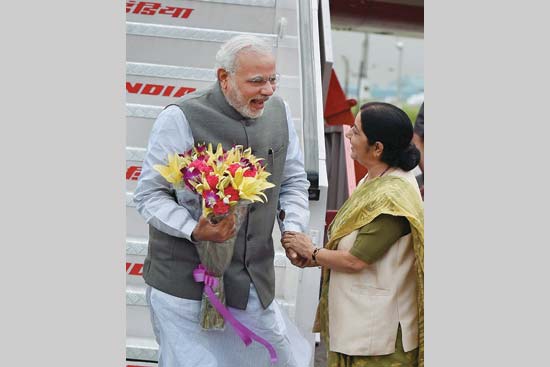 Why Modi will want to back Sushma Swaraj, for now

Despite her socialist background, RSS has buried its old reservations about Sushma Swaraj; sees her retention in cabinet as a weapon to check Narendra Modi

If Modi sacks her after holding out, it will be seen as a “victory” for those within the cabinet who have never seen eye to eye with her, perhaps even plotted against her

Dropping Sushma now will open the floodgates for Congress to target others in the cabinet charged with corruption, like RSS favourite Nitin Gadkari, named by the CAG

With Bihar elections round the corner, the best bet would be to wait for a favourable verdict and reshuffle the cabinet, possibly armed with a ‘Kamaraj Plan’

She is one of the grand women of contemporary Indian politics who has had dramatic ups and downs, a process annotated by the rhetorical flourish of her speeches made in chaste Hindi. But she had been rather quiet in the reign of Prime Minister Narendra Modi: Sushma Swaraj was seen as someone who was keeping a low profile, and doing her work quietly as the Union minister of external affairs, a portfolio in which she was visibly overshadowed by the PM himself.

But whatever peace she attained by keeping her head low has gone. The script changed two months ago when her actions in...