Following matches through radio static to plugging in—Indian fans have been steadfast as ever. But has the dazzle of European soccer held us in enthralled stupor? 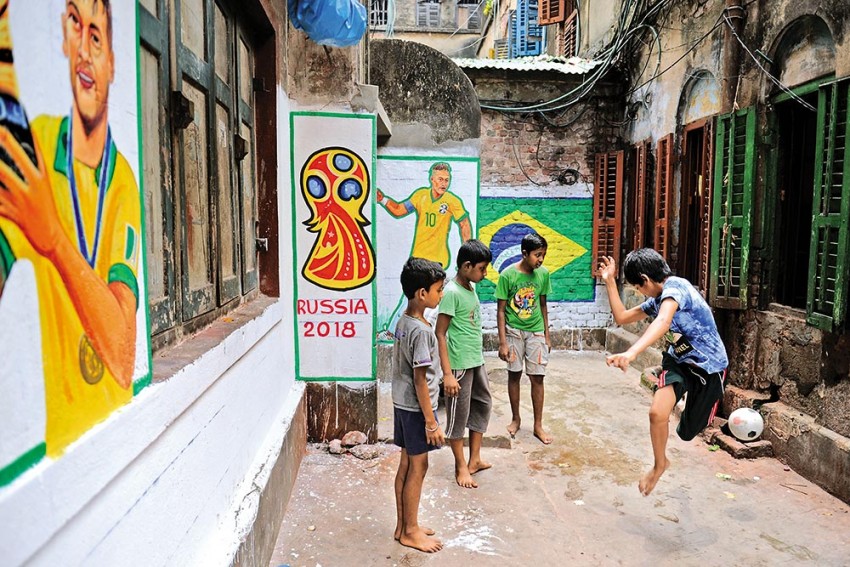 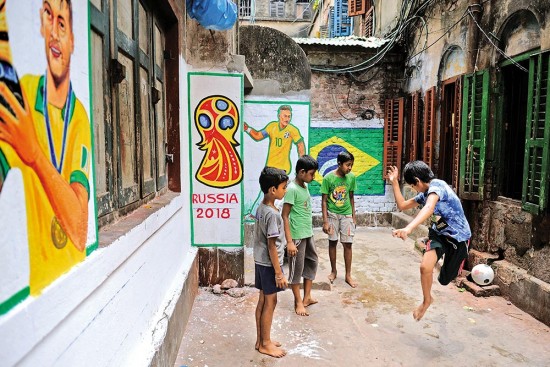 If you keep faith in the Beautiful Game, the FIFA World Cup would arrive every four years as manna from heaven, a cornucopia that is soul food as well as sensual indulgence. While Indian football fans have not thrown up a team their countrymen could root for, they have absorbed, nay inhered, world football through the decades. The nat­­ure of fandom has changed too—from those who fought over broadsheets to read about ‘what happened last night’ to those who can now plug a pair of earphones into their smartphones and transport themselves into a live game. Football has been changing too, with the technology revolution laying its hand on the techni­ques  of football, as on everything else. Yet, in its essence, it’s still what a lay observer will say it is: 22 ind­­ividuals on a lush field running after a leather orb.

It is not that simple though, isn’t it? The origins of provincial partisanship  are layered eno­ugh. The Indian fan from Bengal always had the ‘big three’ of East Bengal, Mohun Bagan and Moh­ammedan Sporting to exp­end their energy on, though greats like Hungary’s Ferenc Puskas were also celebrated. With the dwindling of Indian footballing prowess on the world stage from the ’60s, the fan’s ass­ociation with the game has gone through a radical shift. Experts beli­eve the game-changer in the post-War World Cup era to be the all­ure of watching Mar­­a­­d­­ona running defences ragged in Mexico on colour TV in 1986. 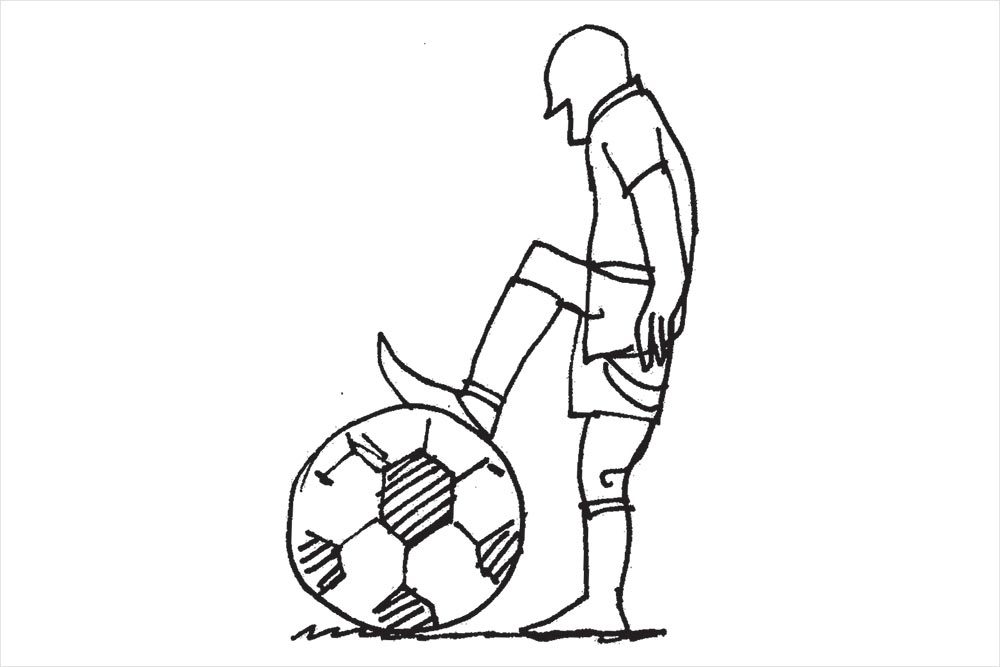 Telstar was the first official World Cup ball supplied by Adidas in 1970 and they have been doing it ever since. The Jabulani used in 2010 was very controversial, while the one used in Brazil in 2014 was called the Brazuca.

“It started in 1958, with Pele and Garrincha,” says football writer Novy Kapadia. He says that prior to that the WC had been won by “predominantly White teams” and the common belief was that “Blacks don’t have the temperament to last a full world cup”, something that was said about the West Indies cricket team of that era as well. “Brazil shattered that.”

The Indian fan’s identification—at an elemental, visceral level—with the Latin American magicians, says Kapadia, started in Calcutta, “which alw­ays had a passion for football, besides being a revolutionary city with a shared passion for Marxism. So, Brazil became a anti-colonial force, showing the White man his place. It was also the kind of football Calcutta clubs used to play, for we couldn’t play the physical game.” Referencing ano­ther football hub, Kapadia says Goa, too, has backed Brazil with their “Portu­guese past”. “In the ’50s and the ’60s, when I was growing up, India supported only one country, and that was Brazil,” he says. 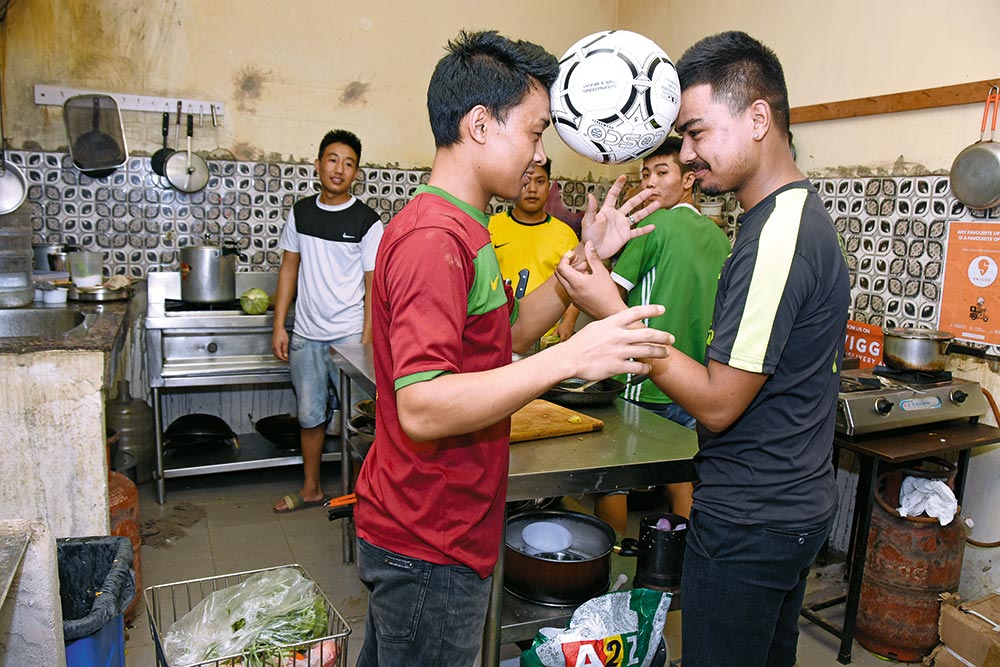 The WC invades a restaurant kitchen in Delhi’s Humayunpur

Football writer Jaydeep Basu mostly agrees. “We did have some love for Brazil. It was in those pre-’92 days. Those days, we still had some sympathy for the downtrodden,” he says, adding that India’s Third World status and Brazil’s success led us to have a “soft corner for them”.

The radio had a stranglehold—with imagination in lieu of colour and picture—over the earliest generation of football fans following the action on a corner of a foreign pitch. Basu mentions that the first live World Cup game he saw was in 1982, while earlier he used to follow them on BBC. “WC was not exactly a great event till 1982, when they started telecasting it,” he says, mentioning that it became a “rage” on TV. In 1982, there was more coverage, but the World Cup was first telecast, from the semis, in 1978. In 1986, then PM Rajiv Gandhi’s int­ervention ensured the Mexico World Cup was telecast in full, and in colour. 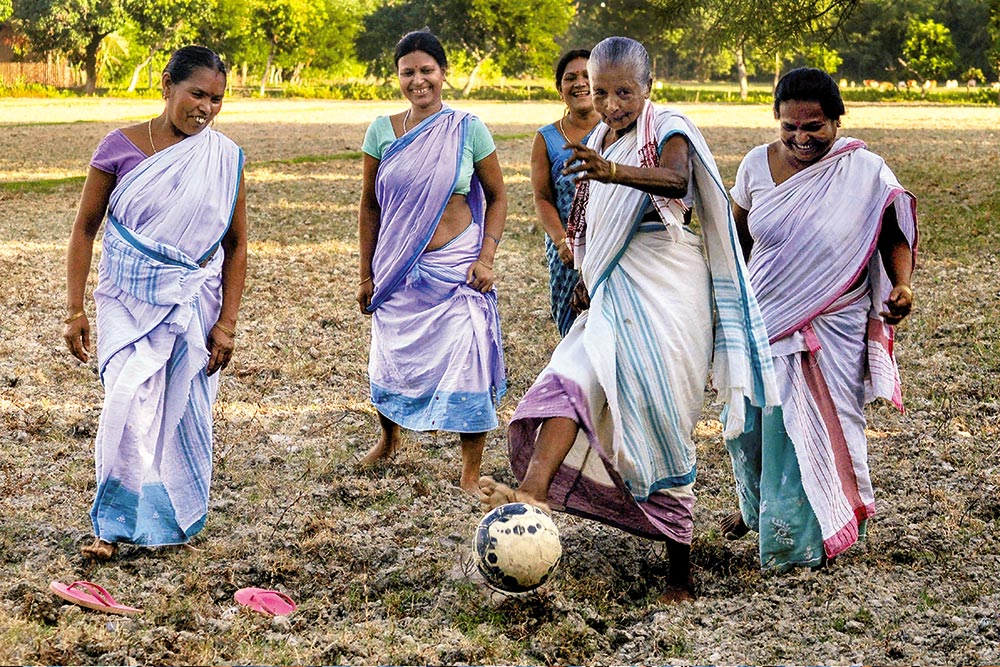 Women at a kickabout on a paddy field in Baska, Assam

Kapadia refers to the BBC World Service as a ‘saviour’, saying, “My generation never saw the World Cup, we only heard it on radio. Prior to that we used to go to the British Council to read.” He recalls how they relied on two-minute newsreels made by the Films Division, where they saw Geoff Hurst’s hattrick win the 1966 edition for England and that goal by Carlos Alberto from Pele’s pass. “I think the first WC Doordardshan broadcast, five days after the final, was Germany vs Netherlands in 1974, close to 11 at night, which football lovers watched on black-and-white,” he reminisces. Kapadia says his first live WC games were in 1982, while the next “big change” was the heavenly marriage of Maradona and colour TV. “It was the first time urban India had colour TV and almost all of the WC was live. There was also the genius of Maradona and that’s how people became Argentina fans. Now, Calcutta itself is divided betw­een Brazil and Argentina.”

“1986 was my first live WC; God’s World Cup as I call it. We didn’t have a TV at home and the WC was in Mexico, so the games would kick off at two at night. We’d go to someone’s house who had a colour TV,” says a football enthusiast. 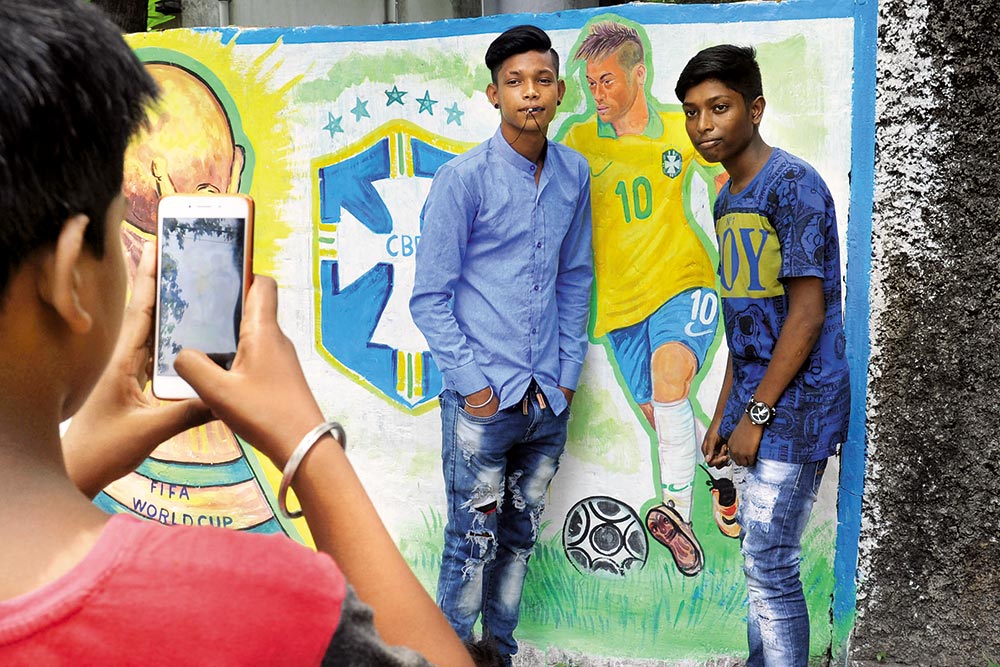 Fans pose before a Neymar grafitti in Calcutta

Diego’s double-take on Eng­land in ’86 will probably be etc­hed in the minds of generations to come—it was the beginning of the explosion of the football ind­u­stry, with media and live coverage that is unmatched in any other world sport. The ’90s bro­ught European club football courtesy satellite TV and names like Manchester United, Liver­pool, Barcelona and Real Mad­rid entered our football lexicon.

With that started football’s slow saturation over the Ind­ian landscape. Earlier, it was the ‘hubs’ that watched it—West Bengal, the Northeast, Kerala and Goa. After satellite TV’s massive ingress, India started becoming a football nat­ion. Not in terms of infrastructure, or ability on the pitch, but in terms of interacting with the game. Current fans—there are leg­ions of them—are gluttons for Eur­opean club soccer. Devvrat Badoni, 27, a teacher and football fan whose first exp­erience of the a live WC game was in 1998, concurs, and thus exhibits how our old, South Ame­­rican loyalties were now on slippery ground. “Between 1998 and 2008, Indians revolved mostly around England, as we were exp­osed to the Premier League. The 2002 WC was all Ronaldo and Beckham for us,” says Bad­oni, mentioning that loyalties again shifted when the La Liga from Spain and other European leagues were telecast, not to mention the mothership—the Champions League. “Now the Indian fan is more divided and plays more football,” he opines. 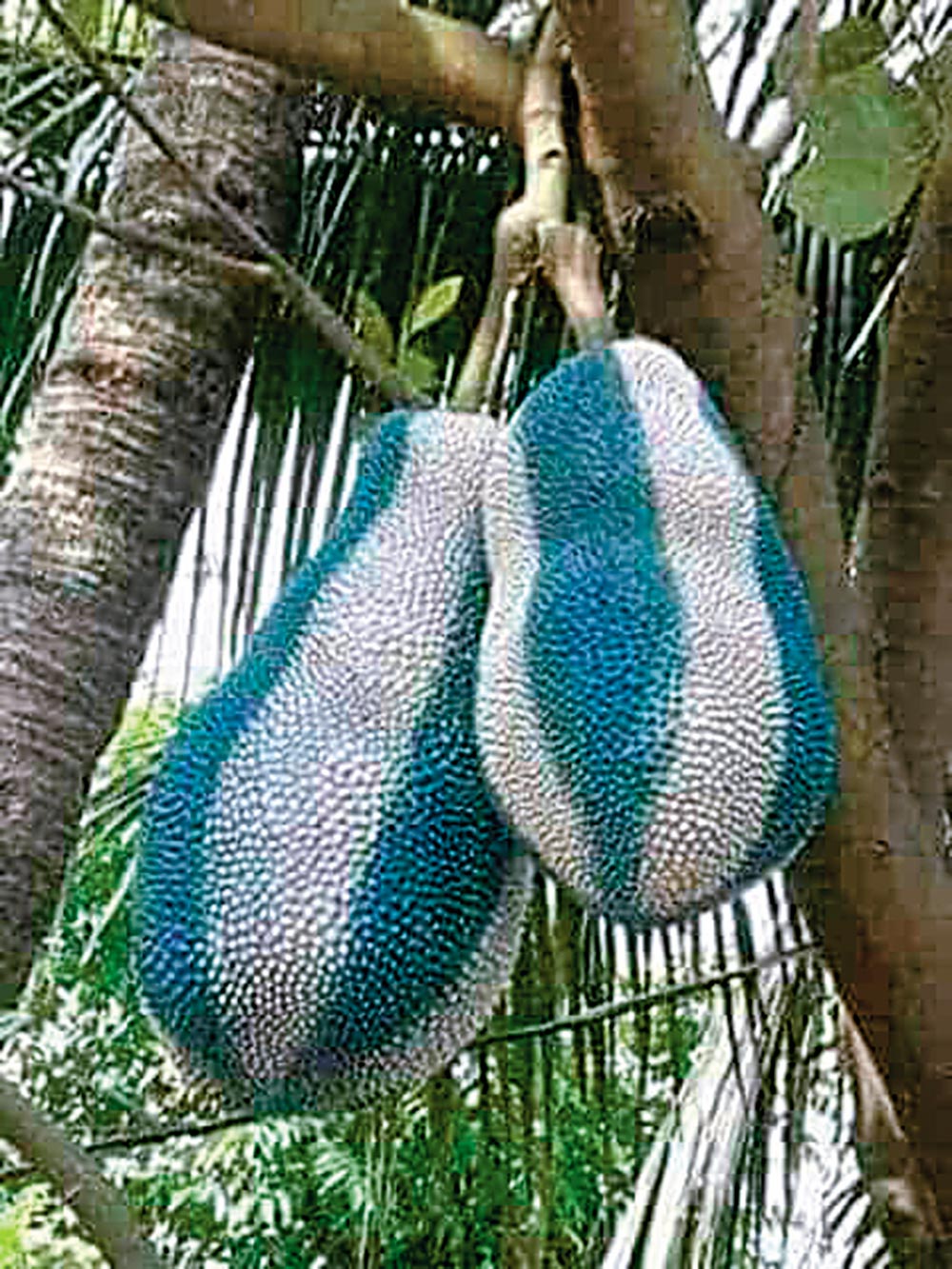 A pair of jackfruits get a partisan jacket in Kozhikode, Kerala

“My first brush with the World Cup was in 2002,” says Sachin Kumar, a marketing professi­onal. He says he “kind of” bac­ked England in 2006 “due to Steven Gerrard” (then of Liverpool), saying the game-changer was the 2005 Cha­mpions League final, where a Liverpool side came back from 0-3 down against AC Milan to win it. His loyalties again lay with England in 2010, while in 2014, he just wanted to watch “good football”. Badoni mentions that he switched from backing England in 2002 to the Net­­­­h­­er­­­lands, “who sadly didn’t qualify” for Russia.

Shivang Sah, a marketing professional based in Dubai who started watching the EPL in 2002, and so supported England in 2006, says he wants either of Brazil or Argentina to win. “I want good football,” he says. 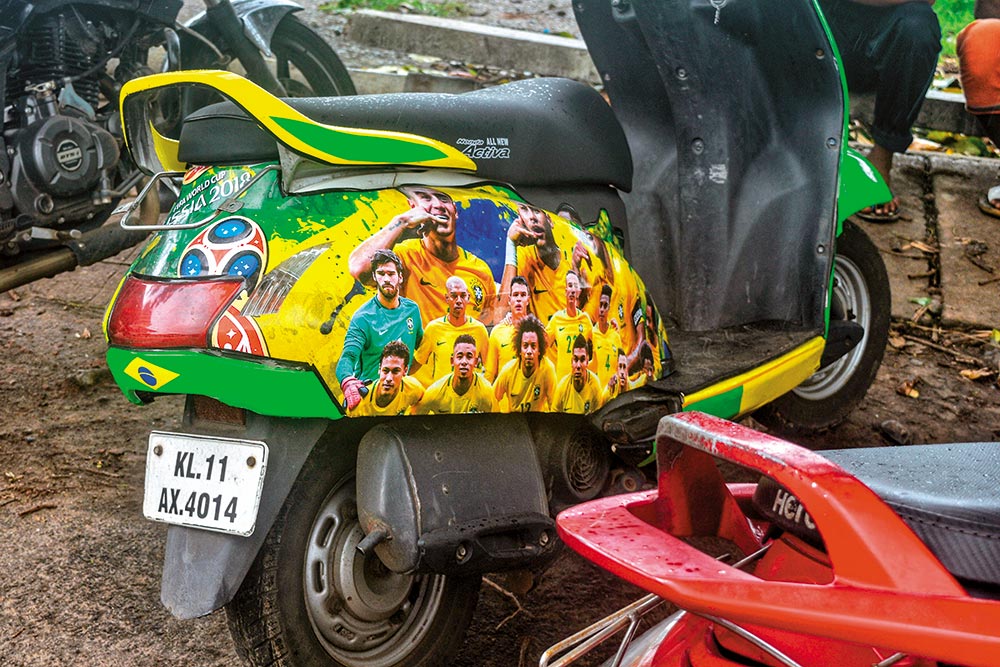 Photograph by Badir Sadique
A former dentist in his home village, Iceland coach Heimir Hallgrimsson gave up the gig after the country qualified for Euro 2016. Will the 51-year-old former professional footballer’s strategic nous give Iceland more teeth?

“You saw the likes of Beckham, who is handsome and rich, and developed an affinity for him. Then Barcelona, Spain and Germany came in and loyalites were more spread out. Now its more broad-based, in much of northern India it’s about Europe,” says Novy Kapadia.

Dedicated sports channels and saturation media coverage have meant protracted exposure to the highest standards of play. A teenager now knows what a fully-­fit Mohamed Salah brings to the table for Egypt after following his exploits for Liverpool in England and Europe. Basu reckons that while this is beneficial in terms of exposing an audience to a level of play, it may be detrimental in the long run.

“If the novelty of WC was lost, it wasn’t because of the TV coverage; it was because of the money that came into Euro­p­ean football. Lots of great players, including Pele, played in their home country—that was the maximum they could earn. Now, every top Latin American player is in Europe,” says Basu. As a result, “there is little difference—once alm­ost civilisational—bet­ween the South American and European styles of football. Now if people talk about the Latin American style, it is only rhetoric. It is completely European now.” 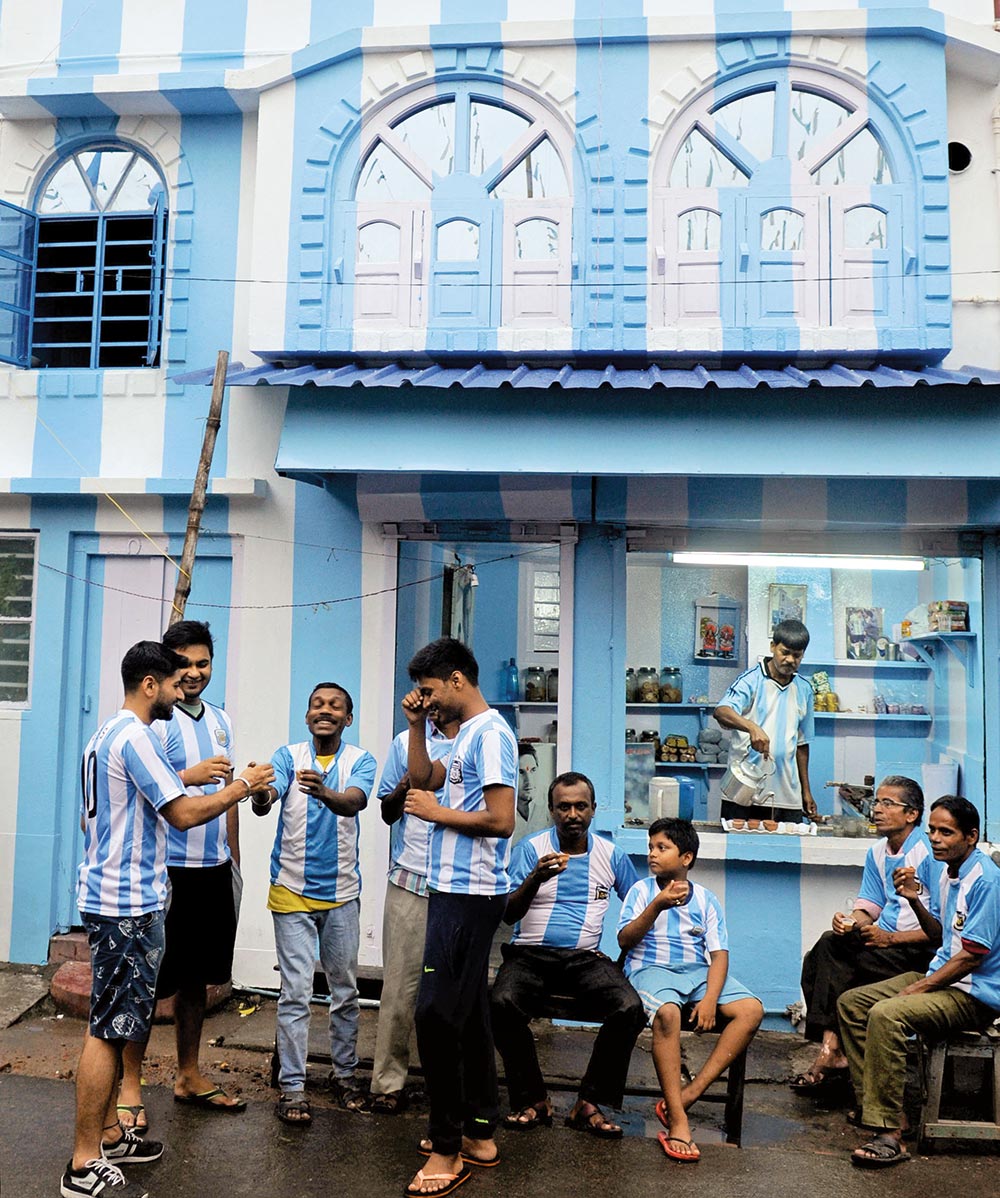 Basu also isn’t a fan of the culture that this exposure has spawned. “The biggest problem in Southeast and East Asia are rep­eat telecasts of matches, which sends you into a make-­believe world. Result: football from India doesn’t get space. The Barcelona or EPL standard has been rea­ched after nearly 100 years of hard work and 50 years of terrific youth development. We are dazzled by the amazing skill on show, but no one is telling us how this was achieved. So, when a 10-year-old wears Rs 8,000 boots and a Real Madrid jersey, he thinks that will take him to that level. There are 100 steps in-between.”

Basu’s penetrating, if dep­r­es­s­ing, insight, wouldn’t have occu­red to the average passionate Indian fan on a crescendo of football fever. For we are more than viewers; in our chosen colours we would embody, over the next four weeks, the purest patriotism there ever can be.