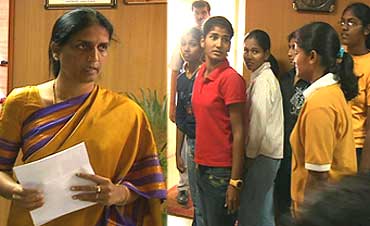 Durga Bhavani, a member of the team, alleged that the secretary has been sending the SMSes at odd hours of the night. Bhavani told Outlook: "After my selection in the team, the secretary had called me up to say that I was included only because of him. In response to my thanks by texting, he replied that mere thanks was not enough and he needed hugs." In another SMS, Bhavani says Chamundeswaranath had asked her to call him up whenever she was alone. "This was in December last," she says. Other visibly disturbed women cricketers said he often made overtures by inviting them to spend weekends with him.

A senior member of the team, speaking on condition of anonymity, said the secretary was involved in several episodes which was unbecoming of his high position. Citing an example, she says Chamundeswaranath was often seen on the field instructing girls on batting, though he was not the coach. He was often seen getting into physical contact with the girls in the process.