Fiddling With Facts As Gujarat Burns

The Roys in the media are harming India with half-truths and worse, says Balbir K. Punj 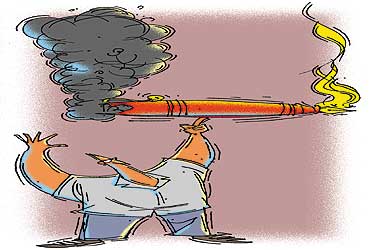 "Gujarat, the only major state in India to have a BJP government has, for some years, been the petri dish in which Hindu fascism has been fomenting an elaborate political experiment. Last month, the initial results were put on public display.

Within hours of the Godhra outrage, the Vishwa Hindu Parishad (VHP) and the Bajrang Dal put into motion a meticulously planned pogrom against the Muslim community. Officially, the number of dead is 800. Independent reports put the figure at well over 2,000. More than a hundred and fifty thousand people, driven from their homes, now live in refugee camps. Women were stripped, gang-raped, parents were bludgeoned to death in front of their children. Two hundred and forty dargahs and 180 masjids were destroyed—in Ahmedabad the tomb of Wali Gujarati, the founder of the modern Urdu poem, was demolished and paved over in the course of a night. The tomb of the musician Ustad Faiyaz Ali Khan was desecrated and wreathed in burning tyres. Arsonists burned and looted shops, homes, hotels, textiles mills, buses and private cars. Hundreds of thousands have lost their jobs.

A mob surrounded the house of ex-Congress MP Iqbal Ehsan Jaffri. His phone calls to the director-general of police, the police commissioner, the chief secretary, the additional chief secretary (home) were ignored. The mobile police vans around his house did not intervene. The mob broke into the house. They stripped his daughters and burnt them alive. Then they beheaded Jaffri and dismembered him."


That was the Goddess of small things, Arundhati Roy, painting the big picture of Gujarat in Democracy: Who's she when she's at home? (Outlook, May 6, 2002). Roy sums here neatly almost all the charges against the Sangh parivar. When a reputed weekly like Outlook publishes a Booker Prize-winner, it is meant to be serious commentary. And concomitantly, Roy has put her brilliant linguistic skills to the service of "truth". Read her graphic details—"The mob broke into the house. They stripped his daughters and burnt them alive". Roy speaks with the confidence of an eyewitness. Alternatively, she must've access to an eyewitness. Anyway, it reads heart-rendingly honest.

Heart-rending, yes, but honest, no. Jaffri was killed in the riots but his daughters were neither "stripped" nor "burnt alive". T.A. Jafri, his son, in a front-page interview titled Nobody knew my father's house was the target (Asian Age, May 2, Delhi edition), says, "Among my brothers and sisters, I am the only one living in India. And I am the eldest in the family. My sister and brother live in the US. I am 40 years old and I have been born and brought up in Ahmedabad."

So, Roy is lying—for surely Jafri is not. But what about the hundreds of media lies that haven't been exhumed as yet? Her seven-page long (approx: 6,000 words) hate charter against India and the Sangh parivar is woven around just two specific cases of human tragedy, one of which—by now, we know for sure—is a piece of fiction.

The rest is hyperbole, punctuated with venom and vitriol to demonise the parivar. Precisely this type of demonisation had resulted in the macabre incident at Godhra. The vicious propaganda unleashed by the secularists for over a decade had made ordinary and gullible Muslims see the innocent Ram sevaks as demons who deserved to be burnt alive.

She terms Gujarat the "petri dish" of the Sangh parivar. The fact is that Godhra has been used as a crucible by the secular fundamentalists. No wonder, after the roasting of the Ram sevaks, they, while condemning the crime, blamed the victims. Many of them invented events such as a quarrel with hawkers, misbehaviour with women and shouting of provocative slogans to justify the horrendous crime.

And Roy continues the demonisation in this flam as well. Of all the politicians, she sees hope only in Laloo Yadav, the man responsible for dividing Bihar's polity on caste lines, vertically and horizontally. He lords—through his wife—over the province where 'the state has withered away' and has since been replaced by senas of various hues. Roy quotes Laloo, "Kaun mai ka lal kehta hai ki yeh Hindu rashtra hai? Usko yahan bhej do, chhati phaad doonga" (Which mother's son says this is a Hindu nation? Send him here, I'll tear his chest open). Her fascination for Laloo obviously stems from his call, pregnant with possibilities as it is of more Godhra-like situations. I discern a sickly ghoulish mindset in that.

Roy's flim-flam is replete with words like "fascism, planned pogrom, gang rape, genocide". About the '98 Pokhran nuclear tests, she says "bloodthirsty patriotism became openly acceptable political currency". Incidentally, her perception on these issues is fully shared by Musharraf, Pakistan's martial president, and partly also by certain sections in the West and the US. But was what happened in Gujarat a "pogrom" targeted at Muslims? Loss of 900-odd innocent lives (both Hindus and Muslims) is definitely not a "genocide" of any one community. Yet it is one more shameful event in the long and unfortunate chain of communal riots in India, since the 1893 Bombay and Azamgarh riots. Beginning from the 1714 Holi riots in the Mughal period, Ahmedabad itself has witnessed no less than 10 major recorded riots. The Sangh parivar was not there in 1714, nor was it a dominant force during the '69 and '85 riots. So what explains these riots when Gujarat was not a 'Sangh parivar petri dish'?

Out of those who perished in the communal frenzy, over one-third are Hindus. Following Godhra, massive spontaneous violence broke out in various parts of Gujarat against the Muslims. Since the rioters were mainly Hindus, they also accounted for about 75 per cent of those who fell to police bullets in the first three days. In fact, till April 18 Hindus accounted for more deaths in police firing than Muslims.

But for almost three weeks now, the violence has been led by Muslims against Hindus and, naturally, a bulk of the casualties are accounted for by them. The police have booked 34,000 rioters, majority of whom are Hindus. Both communities have suffered heavy loss of business and property in the arson and looting. While rioters are communal in picking their targets, looters are not—and they target at random. One lakh Muslims are struggling in relief camps, but so are 40,000 Hindus. This is a horrible riot, which is sad enough, but why call it a genocide? Whom does it help? Not the riot victims, only our enemies across the border.

The country hasn't suffered so much loss of face in the world as it has now, though it is like one of the scores of riots India has seen. Why? The obvious culprits are those who set ablaze a compartment full of innocent kar sevaks at Godhra and those who indulged in the senseless violence in the following weeks. But the real villains in tarring India's image are the Roys in the media and a section of public life, who mix half-truths with fiction to settle their ideological or political scores with the Sangh parivar.

Roy (a role model for several in the secular pack) opens her hate charter with the case of a woman named Sayeeda "whose stomach was ripped open and stuffed with burning rags". I heard similar horror stories in Parliament. The most frequently quoted were the cases of women raped (in some cases gang-raped), their stomachs ripped open, foetuses taken out and paraded on swords or trishuls. But no one was able to give me even one specific case with all the particulars.Roy gave one, but it proved to be a piece of fiction.

The secular pack is not only guilty of parading half-truths but also of condoning and inciting violence. The banner headline of the Hindustan Times (February 28) reporting on Godhra set a trend for secularists when it said 'Gujarat hit by Ayodhya backlash'. Scuttling beyond the 'first-information-report' with a cult of shady intellectualism, it thus immediately established a connection between the Ram Janmabhoomi movement and the gruesome carnage.

Or how will you opine on the Siddharth Varadarajan report in the Times of India: 'BJP fiddles while Gujarat reels under killings' (March 1, 2002). It says: "dastardly attack on train passengers in Godhra... while official inquiry will establish the extent to which the attack on the Sabarmati Express was premeditated, there can be no doubt about the planned nature of violence directed against Gujarat's Muslims...".

The report, carried just two days after Godhra, mentions the murder of Ram sevaks only once in the 450-word plus report. What is important is that Varadarajan, sitting in Delhi, makes readers 'doubtless' about the planning in the backlash while defending Godhra, the indefensible.

Blatant myths and fiction have lacerated the facts on Gujarat. The ToI (March 3) reported Modi's much-publicised misquote of Newton's third law—"Every action has an equal and opposite reaction". In fact, the CM had never said such a thing and no other paper except for ToI had carried the misquote in its original reportage. But later on, numerous editorials were penned on the basis of this canard. All his denials were thrown in the dustbin.

We live in a time of televised war (Kargil), live terror attacks (WTC) and televised riots (Gujarat). Visuals have a hundred-fold greater leverage in shaping our responses. News channels are in a 24-hour rat race with each other, with a killer instinct to be the first with the news. In the process, at times they throw caution to the winds, particularly in a crisis situation. The channels added fuel to the fire during the riots by recklessly showing footage of gory scenes. Contrast it with coverage of the WTC attacks and the Afghanistan war by CNN and BBC. How many gruesome scenes did you see?

The Editor's Guild came down heavily on the Gujarati press and hailed the role of the English press in coverage of the riots. The former might have been guilty of exaggeration but I am sure it has not concocted stories the way the Roys did in the English media. Surprisingly, the Guild has nothing critical to say on the role of the electronic media and of the Roys, guilty of blackening India's name, generating more communal hate at a critical time and demonising a section of citizens through half-truths and complete lies. Some rioters may be guilty of rape and should be punished for their heinous crimes, but what about those who have raped the truth and the country in the last two months?

(The writer, a BJP MP, can be contacted at ethtv2@id.eth.net)