Pakistan has tried to cobble and prop up governments in Kabul four times since 1988, but has failed always. 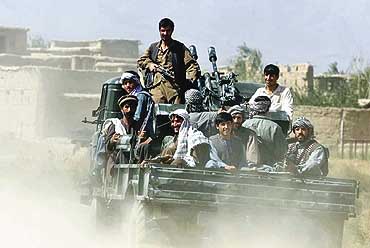 outlookindia.com
-0001-11-30T00:00:00+0553
Following reports that the US was tilting towards the Northern Alliance and flirting with Zahir Shah, the ex-King of Afghanistan who lives in Rome, Pakistan's foreign minister Abdul Sattar recently warned foreign nations not to plot the installation of a puppet regime in Kabul. "Those who tried in the past had to pay a heavy price for such blunders," he explained, "because the Afghans are fiercely protective of their independence and have never acquiesced to any proxy government in the past."

Sattar should know what he is talking about. Since the Soviets were kicked out of Afghanistan in 1988, Pakistan has tried to cobble and prop up four governments in Kabul, failing each time. The first one was in 1989 when a shura government-in-exile, under Pashtun leader Abdul Rasul Sayaf, was assembled in Peshawar to try and oust the regime of President Najibullah. The second was in 1992 when Najibullah agreed to step down and Pashtun leader Sibghatullah Mujadidi was installed as president of Aghanistan. The third followed nine months later when Burhanuddin Rabbani, a Tajik, was crowned president in Islamabad and immediately recognised by the UN. And the fourth time was in 1996 when Islamabad assisted the Taliban to oust Rabbani, recognised the new regime promptly and extracted similar support from Saudi Arabia and the uae. The latter two have now joined the international chorus against the Taliban and left Pakistan in the lurch. Meanwhile, the search is on once again to find a "right" government for Afghanistan.

Pakistan has a natural interest in seeking a friendly government in its backyard. It is ringed by India, deemed hostile and Hindu, and Iran, again deemed unfriendly and Shi'ite (as opposed to the predominant Sunni sect of Islam practised in Pakistan). If a new government in Kabul were to be dominated by the Northern Alliance, whose constituent Tajiks, Uzbeks and Hazaras have received economic and military assistance from both Iran and India, Pakistan's security would be undermined. The same considerations would probably come into play if Shah, a Pashtun, in association with the Northern Alliance, were to be granted a key role in any future set-up to the exclusion of other pro-Pakistan Pashtun elements. In the old days, Shah's Afghanistan was, like India, pro-ussr, while Pakistan was US' "frontline state" against the Soviets.

Worse, from Pakistan's point of view, the Zahir Shah government until the '60s and the Daoud government which followed in Kabul until 1978 refused to accept the legitimacy of the Durand Line which divides Pakistan and Afghanistan. Kabul, under various Pashtun leaders including communist ones like Hafizullah Amin and Najibullah, has long claimed that the Pashtun areas of Pakistan in its Northwest Frontier and Baluchistan provinces are part of Afghanistan. This is seen by the Pak establishment as a potential dagger aimed at the very idea of Pakistan, or what remains of it after Bangladesh's creation.

Unfortunately, however, another notion in currency among Pakistani defence analysts has muddied the waters. This is the idea of "strategic depth," first articulated by army chief General Aslam Beg in 1990. He thought that in the event of a long-drawn and difficult war with India, Afghanistan's friendly territory could serve as a strategic area in the rear providing secure operating bases for the forces. During the 1965 war with India, Pakistan had sought to protect its smaller air force from attacks by parking some of its fighter aircraft at Iranian airfields along its western border with Iran. What it expects to be able to "park" in Afghanistan now in the event of a damaging conflict with India, given the development of N-weapons and deployment of supersonic missiles, has never been made clear. At any rate, the experience with the Taliban since '96 has clearly shown the futility of such notions. A rigidly ideological government with a narrow worldview can hardly be billed as a reliable partner in defence of Pakistan's foreign policy.

Pakistan's current predicament in Afghanistan is unenviable. It flows from an unthinking alliance with the US against Russia in the '80s. It worsened during Islamabad's two-decade-long "intervention" in Afghanistan as it started picking "favourites" among the Pashtuns and made enemies of its ethnic minorities. When this policy didn't yield dividends, Islamabad lent unstinting support to the Taliban without acquiring any leverage in exchange. Now it is being held accountable for this and being made to count the costs of not ditching them. The desire to have a friendly government in its backyard has been confused with an obsession to have a client state at its back. Where does Islamabad go from here?

For the moment, Pakistan has been spared an unpredictable blowback from Afghanistan because the US has wisely determined not to carpet-bomb that country. In fact, Islamabad has been given more time to persuade the Taliban to give up Osama bin Laden and his Al Qaeda jehadis. If this approach fails, as is likely, Pakistan will run out of options.

In the event, Islamabad will have to join with the international community and the contending forces in Afghanistan, including the Northern Alliance, Zahir Shah's group and moderate remnants of the Taliban, to establish a broadbased, Pashtun-dominated, moderate, government in Kabul. That government will then have to rid the country of all radical "foreign elements" and their training camps. That seems like a tall order, but the alternative—denying America—remains fraught with fearful consequences.