Art, literature or music, there’s a jamboree for each occasion 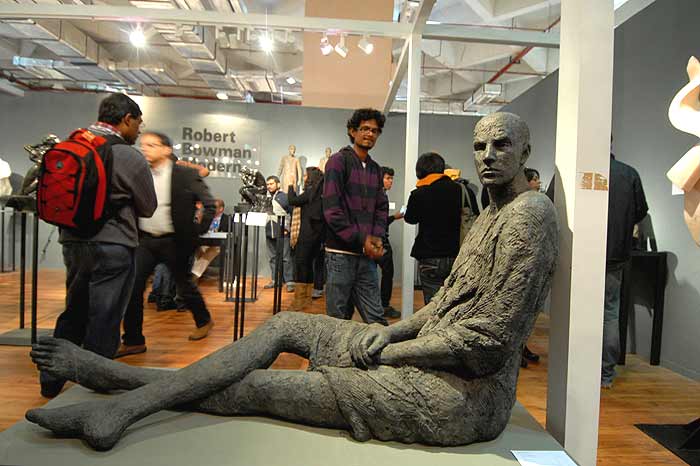 Rushdie or no Rushdie, this weekend, self-important CCTV cameras will for the first time squint down at the bookish and not-so-bookish multitudes thronging the frescoed portals of Diggi Palace. Surveillance cameras don’t just watch. They speak as well, and what they’re saying is that the lodestar of India’s publishing world, the Jaipur Literature Festival, has just got a lot bigger. And that’s not counting the doubled capacity at each of its six venues. Or the much-heralded visit to its colourful shamianas of American talk show queen Oprah Winfrey.

“It’s the nature of a festival, if some go to Ravi Shankar for his music, others go just to see him.”
Ashis Nandy, Social psychologist

It’s no surprise, though. The Great Indian Culture Bazaar is abuzz, and how. In the last couple of years alone, at least 15 new fests have elbowed their way into the spotlight. If the debut Delhi Photo Festival clicked with audiences last October, the Invasion Festival bosses are already planning to up the decibels for their second edition in 2012 with international music sensation David Guetta. Mumbai has got the brand new NCPA Contemporary Dance Festival and an International Art Festival, while the capital has lent its ears to the very first strains of the International Sufi Festival India, the Delhi Jazz Festival and the India Music Week.

“It’s great that we are looking back at art and music and books and trying to reclaim some of the things we lost to Page 3,” says literary critic Nilanjana S. Roy. “Fifteen years ago, one could only look forward to a dry poetry evening or some interminable lecture!” By comparison, the options now read like an eye-popping entertainment guide.

Sample a jam-packed January 2012—two literature festivals in two weeks in Calcutta, one in Hyderabad, the India Art Fair and the NSD Rang Mahotsav in Delhi, the tail-end of the Chennai Music and Dance Festival, the Mamallapuram Dance Festival and, of course, Jaipur. Though Namita Gokhale, co-director, Jaipur litfest, insists that festivals do not compete with each other, there is one technical problem that links them to each other: coinciding dates. Confused fest-goers were forced to pick between the Art Summit and Jaipur last year, remember? 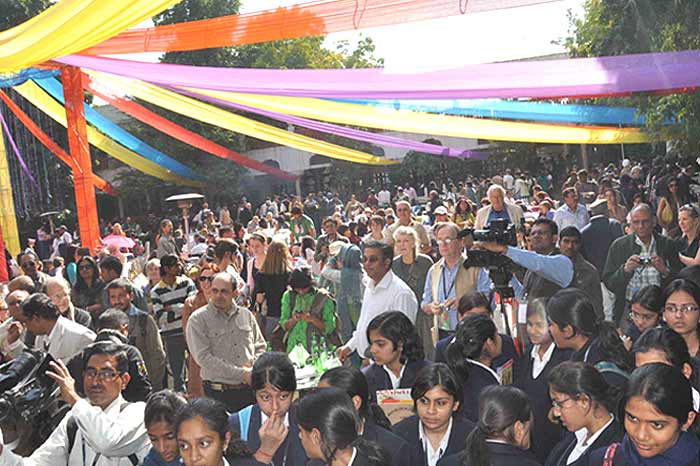 A look at last year’s roster of 16 book fests, 20-odd music and dance fests and two major art dos, among numerous other cultural galas, would reveal that India has quite a festival factory going. And keeping its machinery whirring are not just artistes and organisations, but also unlikely yet eager and moneyed sponsors, and mobile audiences in search of a quick spot of culture.

Culture critic Sadanand Menon explains the festival phenomenon as an extension of India’s full-blown “shopping mall culture”. “Culture, well-packaged like objects on a shelf, is marketed to hungry consumers. People attend it like they would a jamboree,” he says.

Close to a lakh-and-a-half visitors flooded the India Art Fair last year (on cue, it has dropped the stodgy ‘summit’ from its name this year), while the Jaipur litfest had 62,000 people scrambling for seats. Goa’s Sunburn, says co-founder Shailendra Singh, went from a 10,000-strong first edition in 2007 to a lakh this time. Meanwhile, at the NSD theatre festival, drama enthusiasts have been queuing up for tickets, unfazed by the fact that their cost has doubled, from Rs 100 last year to Rs 200.

“The size of the Jaipur Literary Festival is a compliment to the quality of programming.”
Namita Gokhale, Co-director, Jaipur litfest

Pramod Kumar K.G., who helped start the Jaipur litfest, explains: “With everything accessible on Youtube now, the live experience becomes all the more special. If you liked what Vikram Seth read from his book at a fest, you would want to pick it up and maybe get it autographed. If there’s an obscure writer whose session interested you, you might buy the book which you would not have done merely looking at the title in a bookstore.”

No wonder fests are battening on the enthusiasm of their audience: the India Art Fair, which started with 34 stalls, now has 90-odd, with nearly half of them representing 19 countries. Having outgrown Pragati Maidan, it will be mounted in a custom-built 14,000-square metre venue in Okhla; a temporary museum for a thousand artists. For artist Kavita Jaiswal, that’s reason for cheer: “A fair like this exposes artists to ideas and currents of the global art scene.”

Thiruvananthapuram’s Hay Festival will extend this year to Chennai, Calcutta and Guwahati. The Khajuraho Dance Festival, 2012, plans to streamline its growing number of acts by introducing three separate categories for performers. It will also unveil an art mart at which painters and dancers can collaborate. Rithvik Raja, president of the Youth Association for Classical Music, enthusiastically reels off statistics to explain the expanding appeal of Chennai’s iconic Margazhi festival: “This year, 152 sabhas organised nearly 3,400 concerts compared to 121 sabhas that put together 2,700 shows last year.” As many as 150 artistes from North America, Canada, Singapore and Europe found themselves on stage. 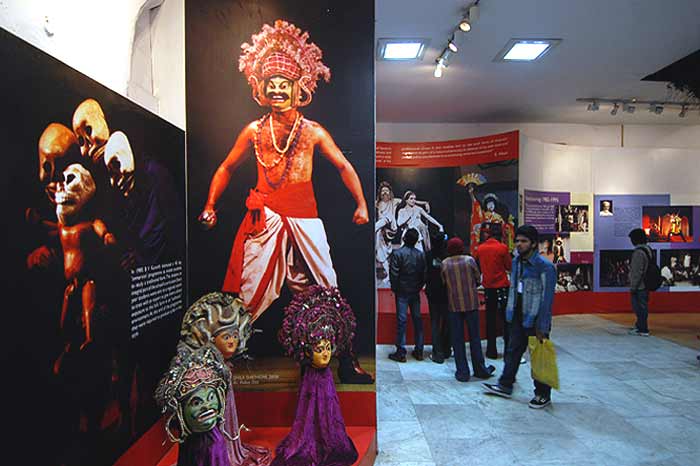 Clearly, fests are, as Nilanjana says, the weddings of the cultural season. The jubilation, though, comes with a disclaimer: “Fests are glamorous now, so organisers want to cash in on that and hold events of their own. It takes a lot of effort to put together a decent fest year after year, and it remains to be seen how many of these will last,” she cautions. Teamwork Productions’ Sanjoy Roy, producer of the Jaipur litfest, the Hay Festival, Bookaroo and, soon, he hopes, the Harud Literary Festival in Kashmir, calls it the “KBC syndrome”—emulate a format that works. Emulating success, though, is easier said than done.

Writer and blogger Jai Arjun Singh, a fixture at the 2011 festival circuit (he ticked five litfests off his list), now finds the festathon grating on him, and has bowed out this year. “It got a bit tiring,” he admits. “Almost every town and city wants to have its own litfest.” While the publishing boom that has spawned clone fests is all very well, they are often not thought through, says a young writer who didn’t want to be named. “Organisers,” he says, “first put together a star cast of writers, and then write the script around it.”

“It gets a bit tiring. Almost every city and town wants to have a literary festival of its own.”
Jai Arjun Singh, Writer and blogger

Jai Arjun learnt that twice over in the last year. “At one fest, which claimed to be all literature and no tamasha, I was invited to be a moderator months in advance. But even five days before the fest, I wasn’t told which session I would be in.” Worse was in store. “It was so mismanaged and poorly publicised that one session I participated in had all of eight attendees, four of whom were waiting for the next session to begin,” he says, still seething.

Contesting the argument that fests are great platforms for emerging voices, another young writer says, “If you want to promote a new voice, publish him. Giving him a 30-minute session parallel to a Rushdie session makes no sense. Unless you are the top name there, the press doesn’t cover you, people are not interested in you.”

Indeed, it is the A-listers who draw the crowds—both the kind that come for the artistes and authors and the kind that stargaze and scout for after-parties. “I know people who drive up to the Jaipur litfest after 6 pm, when the sessions are over and then claim they are regulars there,” says Jai Arjun sceptically.

Everyone today wants a piece of the arts, even if it’s only to wear as a badge of sophistication. Social psychologist Ashis Nandy sees in this the same “middle-class hypocrisy” that lies behind drawing-room displays of the complete works of Shakespeare or Tagore that are never actually read, but nevertheless, he feels festivals have a lot going for them. “The fests are an attempt to expand the market and there is nothing wrong with that.” It does, after all, expose more people to culture, whatever their reasons to visit a fest. “It is the very nature of a festival, that if some go to listen to Ravi Shankar because they enjoy his music, others go just to see him,” he argues. 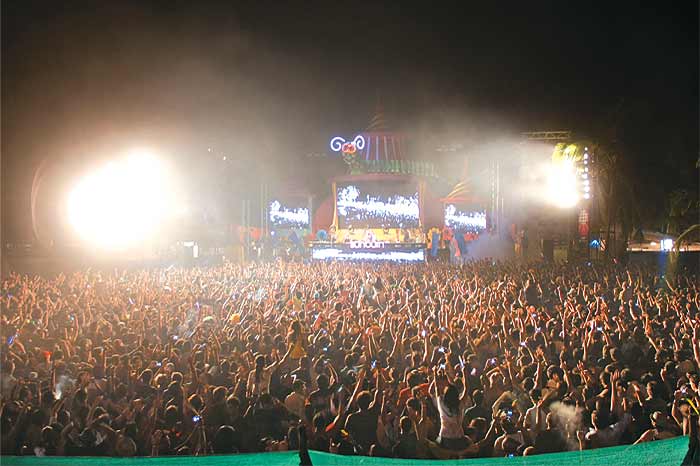 It helps that the venues are thrown open to all and sundry. It helps even more that they are often beaches, heritage hotels or lush getaways. Travel agencies have been quick to offer packages like a five-night ‘Jaipur Literature Festival Special’ for Rs 35,000 or a week-long ‘Khajuraho Dance Festival Tour’ for Rs 60,000. Varun Chadha, coo of the travel portal Journeymart.com, says, “Festivals are the third most popular reason to travel among our users, after honeymoons and hill stations.” Festivals like Sunburn, Rajasthan International Folk Festival, Jaipur litfest, Khajuraho Dance Festival, Kerala’s Soorya Music and Dance Festival and Gwalior’s Tansen Music Festival get people packing their bags for a culture trip, he says. “The benefits percolate down to the autorickshaw driver, the hotel guys, the owners of shops and restaurants. It’s a win-win situation,” reasons Pramod.

But when all the country’s a stage, the players are a motley lot. Not just tourism ministries but also FMCG, mining, construction, manufacturing companies want their stamp on Brand Culture. Nilanjana concedes it is an image-building exercise, aimed at grabbing the attention of “people of a certain profile”. “Most corporate sponsors want to know which celebrities will be there and how much media attention that will draw, because that’s how they get their mileage,” says Anjum Katyal, co-director of the Apeejay Kolkata Literary Festival.

“Culture, well-packaged like objects on a shelf, is being marketed to hungry consumers.”
Sadanand Menon, Culture critic

DSC Limited, the thriving infrastructure firm that’s the principal sponsor of the Jaipur litfest, pumps in $500,000 annually into all things literary. Its director Manhad Narula, also the founder of the DSC South Asian Literary Prize which turns two this year, has no doubts that it’s money well spent. Being mentioned in the same breath as the litfest for five years, he says happily, has made the company “well-known as a caring corporate associated with strong literary initiatives”.

It is just the kind of support Neha Kirpal, founder and director of the India Art Fair, could do with. Investment in the art fair is Rs 7 crore this year, a giant leap from the 2008 figure of Rs 1.5 crore, but for Kirpal it’s not enough. “We need more corporate sponsorship, especially for an investment-heavy model like this one.” The Jaipur litfest too saw investment go up from Rs 1.4 crore in the first edition to Rs 5.5 crore this year, with sponsorship revenue bringing in Rs 3.8 crore. A substantial Rs 4.5 crore went into the NSD theatre fest.

But what do the numbers add up to? Curator and art critic Gayatri Sinha says, “Mass celebrations of culture have a strong base in commerce.” And while trade comprises the base of the pyramid, she says, its tip needs burnishing too: “We need biennales, we need to work on museums, on book publication, circulation of ideas.” Sadanand points out that the preoccupation is with trade rather than artistic merit: “A young artist may become a sensation because someone has offered a good price for his work. But that’s not enough. Look at art education—there are no facilities; a sense of abandonment prevails.” Nilanjana adds, “I don’t see any excitement about building writing residencies or spaces for artists to have studios.” It’s time, clearly, that some of those festival buntings got unrolled for spaces dedicated to the craft, and not just the commerce.

By Arpita Basu with Akhila Krishnamurthy in Chennai