Call it the new polar cap. A hard, Gujarat-focused campaign by the Congress backfires and the BJP pockets a fourth state. 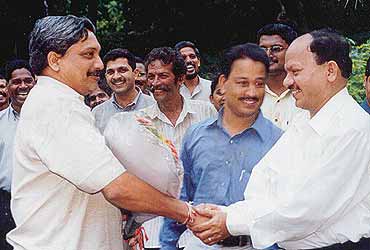 outlookindia.com
-0001-11-30T00:00:00+0553
If you throw a can of Kingfisher in Goa, it will hit a former chief minister. There are so many of them around. In the last 12 years alone, there have been 13. But even in this crowd, the new CM, Manohar Parrikar, stands out for having pulled off an incredible victory. In his last tenure, before his government fell, he was the first BJP CM in a state that may have never dreamt two years ago that such a day would come. Now he's back with a bang, proving all his detractors in Panaji wrong.

Appropriately, only the Goan Magicians Guild guessed the outcome of the polls correctly when they opened a sealed box after the election results and revealed their prediction. Seventeen seats to the BJP and 16 to the Congress. They were right because they were magicians and not political analysts. But if the BJP high command wants to point to the surprise in Goa and say that its merchandise is working in the "nation", it will be a somewhat desperate analysis.

Before the elections, the Congress and the Nationalist Congress Party shot themselves in their own foot. Says former chief minister and Congress leader Pratap Singh Rane, "The Congress ruined itself by gross infighting. The people were just fed up." And there are accusations against the BJP, that it illegally wooed voters before the elections by promising many populist social schemes. Another point that speaks against any immediate resurgence of the BJP after Gujarat is the fact that a voter in Goa elects "the fellow" in his constituency and not his party. A party in Goa is not political but evidently a provider of alcohol and peanuts.

A factor that contributed to the BJP's win, says the Church, is that voter lists were manipulated by "the government machinery". In Panaji, Father Valeriano Vaz from the archbishop's office says, "Over 3,000 names, mostly of Christians, went missing." The figure is significant as Parrikar, who contested from Panaji, won with a margin of less than 2,000. It's the same story in other constituencies too. Sisters Jaqlin d'Cunha and Petornila Fernandes, who run a Christian institute for the disabled in old Goa, say they were dropped from the list. The moral of the story is that the success of the BJP was more because of, among other things, the Congress' suicide and Parrikar's own image as a man who is progressive and not corrupt. The success of the BJP had nothing to do with any "awakening" of the majority community that makes up for about 70 per cent of the population in the state. But the future may be different.

There is a slow change that has taken roots in a society that has so far made a big fuss about being peaceful. Parrikar calls it "soft polarisation". It's natural, says the first Hindu Brahmin CM in the state, "for the majority community to view me as someone who will understand their problems". The engineer from IIT Mumbai, who has an easy way about him, comfortable in a loose shirt and trousers and slippers, as though he is still walking from the hostel to his class, says it's very silly to make laws that deliberately and specifically favour the minorities. "Good governance is all that matters," he says.

That was his USP in the elections and among a cross-section of the people including Congressmen who were licking their wounds, not many deny that he in fact delivered. Time and again he stresses the point: all he wants is Goa's economic prosperity. "And that's what the Congress, some sections of the media and even the Church was opposing. A corrupt party is fine but not a communal party. Some priests went from home to home asking them not to vote for the BJP. Isn't that communal?" Still, 4.5 per cent of the BJP votes came from Christians. "So, the point is not all Christians think the BJP will come and kill them. It's a fear that's being built up." Despite his obsession with "good governance", scratch the surface and you find something familiar: "Students must know about their culture. I want to make some changes in education (see interview). "

Will he change the history syllabus? Answering that, he knows, will be walking into a minefield. "Whatever I do on that front, I'll take great care to get the opinions of all the concerned sections. I am not fond of controversies." And he hastens to add, "I don't want to dilute my stress on good governance with all this." Despite this reassurance, there is a fear that he is hinting to the majority community—through questionable recruitment in the administration and police force—that he has their interests in mind.

Father Vaz, whose business it is to collate political matters for the Church, calls it "the agenda". He says Christians were "systematically" denied promotions or sidelined for posts like director of education, director of prosecution and director of sports. "He's given away the infrastructure of some 15 to 20 defunct schools to trusts floated by the RSS." The CM doesn't deny this. "There are another 69 schools I want to give away. To anybody who is interested in taking up these projects. I have even asked the Church to come forward." But Vaz points out, "That's what he says when he is questioned. But when he apparently made the offer to the Church, we didn't even know such an offer was being extended."

These were among the "changes" the minority community experienced in the 16 months of BJP rule before the elections, though Parrikar will insist it was 18 months, counting the period after the dissolution. It was the fear of this "agenda" that made the Church come out with a circular the moment elections were announced. It asked its people to shun corruption and communalism, which meant the Congress and BJP. But apparently, the sheep in many constituencies went astray.

"There was too much money this time," says Father Costa, the parish priest of Rosary Church in Navilni where, interestingly, the BJP put up a candidate called Jinnah but later withdrew him. Even the Church admits it's not fair to single out the BJP as almost everybody doled out money. Rocky Fernandes, a masseur in Benaulim from where former CM and Congressman Churchill Alemao suffered a shock defeat to BJP ally the United Goans Democratic Party, says, "Two women went around offering Rs 500 to each voter in a family. If there were six voters in a house, they gave Rs 3,000 after making them swear on the Bible."

So shocked are Congressmen that some of them allege black magic was used to defeat them. A lady from Benaulim says, "A goat was beheaded in the middle of the night and a man walked near our homes late in the night with the head. The next day, many of us couldn't see the hand symbol on the list when we went to vote." Must be the hangover after drinking for 500 bucks, someone jokes. But Father Costa makes a graver observation. "Before the elections, the Congress tried to use the Gujarat riots by showing a cassette on it to many people. I think in some places, especially north Goa, it backfired. I think the majority community, tired of being accused of being unfair to the minorities, began to see the BJP as its party. It's not a mass feeling yet but that factor is slowly creeping in."

Whatever be the reasons that gifted the BJP with another CM, the high command should be very grateful. Till now, it had only three chief ministers. Now it has four.