A restive Iraq gets violent and Indian troops, if they respond to the US call, may well walk into a minefield 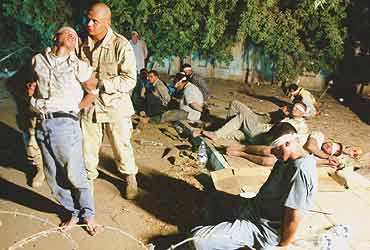 outlookindia.com
-0001-11-30T00:00:00+0553
When six British soldiers were killed in Basra, southern Iraq, a fortnight ago, coalition commanders just couldn't figure out what had been the provocation for the attack. The reason gradually dawned on them: British soldiers had barged into homes with sniffer dogs, much to the chagrin of Muslims who consider dogs impure. The feelings of Iraqis were also roiled because British male troops, insensitive to local cultural traditions, had conducted body search of Iraqi women.

As Iraq plunges into a spell of bloody reprisals, US-UK troops are now facing the fire. On July 6, an Iraqi student shot an American soldier outside the Baghdad University. The soldier had pushed the student around and he, unable to accept the humiliation, returned 30 minutes later and shot his tormentor in the neck.

These are just two of the innumerable troubling images New Delhi could consider as it mulls over Washington's request for troops in Iraq. Perhaps, the only factor favouring the despatch of Indian troops is the American assurance of deploying them in the Kurdish-dominated north where resentment is not as sharp as in central or south Iraq. One reason why New Delhi and Washington claim Indian troops in Iraq won't be on combat duty.

A senior coalition officer, however, admits: "A lot will depend on the ground situation, which has been deteriorating quite rapidly." Indeed, last week brought some worrying news from the north—the oil pipeline to Turkey was once again blown up and will remain inoperative for a fortnight; two American soldiers were wounded in a firefight near Kirkuk; Turkish troops were arrested on the charge that they were planning to assassinate the local governor. With tension simmering between the Arabs and Kurds in the north, and Turkey suspicious of the movement for Kurdistan, India could just as well discover, as Americans are every passing day, that even peace can be hell.

India needs to consider several aspects of American occupation to understand the challenges its troops could encounter here. For one, the Americans face an odd situation because of the cultural schisms between the West and Iraq. "The troops have received insufficient training in cultural sensitivities and a lot of them are near psychotic," explains Patricia Ackerman of the International Occupation Watch Center, an NGO that's now monitoring the coalition's activities. Add to this the oppressive heat and the spiralling hostility, and you know why Washington wants to requisition assistance from other countries.

The anger against the Americans largely stems from their inability to manage peace. From the time Baghdad fell on April 9, the Iraqis have been deprived of electricity, water, even oil, a commodity available in abundance. Worse, the Coalition Provisional Authority (CPA) has launched a sweeping purge, disbanding the army, police and the ministries in an attempt to weed out Saddam Hussein's supporters. At one stroke, six million Iraqis were rendered unemployed. Ruing the decision, one coalition officer points out: "We may have opened ourselves up for attack. For, there is an entire army that possesses weapons and is a disgruntled lot because they have lost their jobs."

The Iraqis were aghast to hear the US administrator, Paul Bremer, announce that nearly $1 billion had already been spent on reconstruction. Where has all the money gone, ask furious Iraqis, exasperated at the deterioration from their pre-war living conditions. Iraq witnesses power cuts anywhere between six and 18 hours; it never exceeded an hour under Saddam. The queues at authorised petrol stations are interminable, requiring a wait of anywhere between four to 24 hours. In the open market petrol is available at five times the price of 50 dinars a litre.

Acute petrol shortages are largely because the oil infrastructure was damaged during the war.Baathist remnants have thwarted repair works, sabotaging pipeline and disrupting supplies. But tell this to Iraqis (who believe Bush's war was all about oil) and they'll disagree vehemently. Like Isam Shukri, member, Union of Workers of Iraq, who asks: "Explain to us why a country like the US with a defence budget running into billions of dollars, and which can fly helicopter gunships, is not able to fix pipelines or electricity grids in three long months?" Indeed, Iraqis ascribe their woes to Americans because it is they who now control the levers of power in Iraq.

Worse, there's the indiscriminate use of force against civilians at checkpoints, the arrest of thousands of Iraqis without any charges, improper searches and illegal seizure of property. Says Favio Alberti of A Bridge to Baghdad, an Italian-based NGO, which is part of the Occupation Watch Centre: "Since we all know how repressive Saddam's regime was, there is therefore no need for a new chapter titled 'Occupation'. We are watching the coalition troops and will do the same with the Indian troops when they arrive."

There are several reasons why the US administration is seeking Indian troops. One, should the Indians arrive in north Iraq, the Americans could move an entire division to the Sunni-dominated areas in and around Baghdad like Fallujah, Balad and Al Ramadi. Americans believe the Baath remnants are trying to reorganise themselves here. Interestingly, several coalition officers think Indian troops are more restrained in their counter-insurgency operations than the Israelis.

The charter of duties for the Indian troops, sources say, is expected to include:


There are some Iraqis who would want India to enter their country. There's a degree of familiarity with Indians because nearly 80,000 Indians were employed in Iraq before Gulf War I. Adnan Pachachi, a widely-respected Iraqi leader who has returned after 35 years in exile, says: "The police forces need training and equipment. If help comes from friendly countries like India, we'll welcome it. I don't think they will be seen as an occupying force because they were not part of the coalition that invaded Iraq." Pachachi is likely to be part of the governing council expected to be announced next week.

At the other end of the spectrum is Entifadh Qanbar, spokesperson, Iraqi National Congress. Says he: "We would rather have a paramilitary force comprising our own people rather than foreign troops who neither know our topography nor our culture." Cautions Ghalik al Rakabi, founder, Iraqi Tribes Gathering, an organisation working for peace and equality: "If the Indian troops behave like Gandhi, we too will be non-violent. If they behave like guests and not occupiers, we'll be ideal hosts too."

69% Are Against Sending Indian Troops To Iraq