Fenced By The Thread

Early 20th century saw several social reform movements in Kerala succeeding in varied degrees. Yet an undercurrent of casteism persists today to the benefit of politicians. 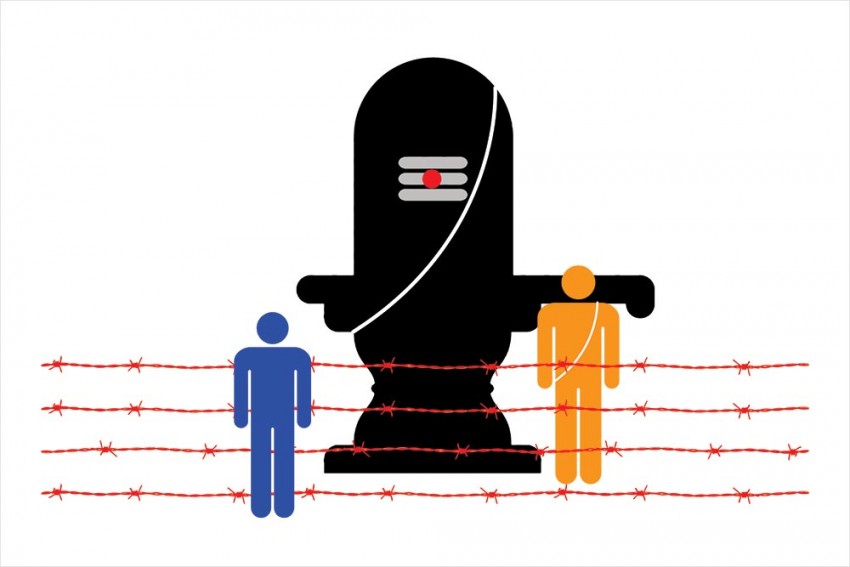 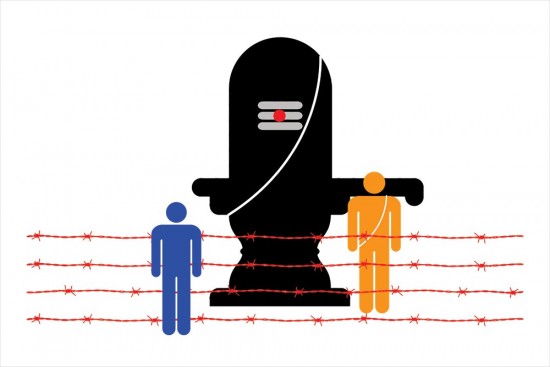 Historically, geology and geography have shaped Kerala, but, in the last two centuries, politics, culture and technology have lent their powerful hands in sculpting this unusual land. Ideas and practices from overseas found fertility in the land of pepper and coconut. Powerful winds from the mainland effected profound changes. Vaikom satyagraha (1924-25) is the story of how such gusts combined to reshape enduring local edifices. The central issue was caste and the scene Vaikom, a temple town in the north of Travancore, a princ­ely state that was nominally indepe­ndent but controlled largely by the British.

Based on old and unempirical ideas about souls, birth, incarnations and related ideas about entitlements, privilege and exclusion, caste worked as an elaborate and self-perpetuating set of institutionalised injustices. It determined everything about a person’s life. Its dictates were accepted as natural law.

The operations of caste created a unique society in Travancore and Kerala. Some of its manifestations took on such bizarre forms that a horrified Swami Vivekana­NDA called Kerala a “madhouse”. Untouchability was compounded by unseeability and unappproachability: notions of purity seeped out of scriptural writing and were enforced by priestly and royal power.

The winds of real change began to blow with the coming of the white coloni­ser. Ideas about equality and justice took root, Kerala economy began to be integrated with that of a larger world. Education transformed soc­iety, particularly when Euro­pean missionaries began to open schools to avarnas. Christians, Ezhavas, an avarna caste, and Muslims were among the first to seize the opportunities offered by colonial modernity. The royal family of Travancore, defenders of the status quo, had been forced to concede some of the demands of the avarnas, made with increasing frequency and vociferousness, from about the final decades of the 19th century. But they saw themselves as guardians of a pure form of Hinduism and adamantly refused temple entry to Ezhavas and Dalits. Meanwhile, individual Ezhavas who had converted, found the experience liberating. The stigma of caste melted, doors opened. Ezhavas had been debating mass conversion for some time. Islam, Sikhism, Buddhism, the Brahmo religion and Christianity were considered, with most favouring Christianity. But an idealistic Ezhava leadership still hoped to reform the faith and find dignity in it. As an assertive avarna group demanded reform and an orthodox royalty refused it, the stage was set for an epic struggle.

Though some schools were opened, many restrictions, inc­ompatible with modern ideas of freedom and dignity, continued to exist. A good example of the absurdity: Alummootil Chanar, an educated Ezhava so wealthy that he was only one of the two in Travancore then to own a car, had to dismount and walk along a circuitous route to avoid ‘polluting’ a temple, while the avarna’s driver, a Muslim, drove along the road in front of it.

Ezhavas, like other avarnas, chafed under such restrictions. Entrepreneurial, ambitious and hardworking, they were in the forefront of avarnas and demanded greater freedom in education, employment, movement and worship. A generation of enlightened leaders, including Sree Narayana Guru, Mithavadi Kri­shnan, Dr P. Palpu, C.V. Kunjiraman,

Kumaran Asan and Sah­odaran Ayyappan were urging the community on and wresting concessions from reluctant royal rulers. Tensions rose, there were occasional clashes between avarnas and savarnas. Ayyankali, the maverick leader of Pulayas, a Dalit group, forcibly used public roads forbidden to Dalits as early as in 1893, winning concessions from the orthodox.

Influential Ezhava leader T.K. Madhavan, editor of Desabhimani, chose to enlist Mahatma Gandhi and the Congress in the struggle aga­inst caste restrictions. Things began to move after Madhavan succeeded in getting the party’s Kakinada session in 1923 to work for the eradicat­ion of untouchability. Vaikom chose itself. It was a seat of orthodoxy where Ezhavas and Dalits had made previous bids to breach some of the rules and the abrasive history of such clashes resona­ted with them. Gandhi agreed to support Madhavan on the understanding that the struggle would be non-violent. But he was willing to settle for much less than Madhavan envisaged. Considerations of pract­ical politics, deep-rooted sympathy for chaturvarna and that the rulers of Travancore were Hindus must have influenced him. For Gandhi, the satyagraha was another experiment with truth. 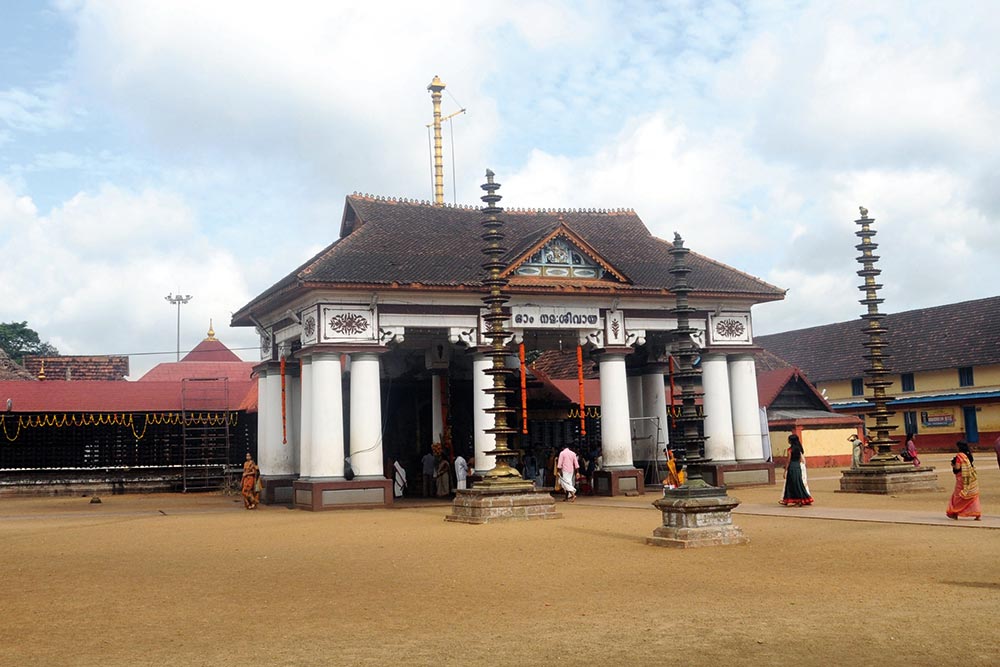 The impetus may have come from an Ezhava leader, but the momentum for the epic struggle came from upper-caste Hindus. Driven by dreams of a fairer world and concern for people, they had begun to see as fellow citizens, an array of educated reformists like K.P. Kesava Menon, K.M. Panikkar, K. Kelappan, Karur Neelakantan Namboothiri and T.R. Kri­shna Swami Iyer led and participated in the movement. That they were battling people of their own castes did not deter them. There were Christians and Muslims too among them, but Gandhi sidelined them with the argument that the struggle was among Hindus to reform themselves.. What could have been a political struggle for civil liberties was redefined as an in-house difference of opinion among a set of believers.

The locus of the struggle was the Mahadeva Temple at Vaikom, the roads around which were out of bounds to avarnas. In 1870, Travancore had thrown open all roads to all castes. But the Namboodiri brahmins of Vaikom were adamant that avarnas could not walk close to their temple. Theendal palakas or signboards indicated the points beyond which avarnas could not walk. The satyagrahis wanted the roads to be opened and the signboards removed. For the Namboothiri priesthood, tradition was sacred and unalterable.

On day one of the satyagraha (March 30, 1924),  trained volunteers, dressed in khadi and sporting garlands, walked up to the signboards behind which stood police barricades. A huge crowd had gathered to watch the procee­dings. After the marchers were removed, little happened. This was repeated the next day. Soon it gained a ritualistic pattern. Collection drives and meetings were held, speeches were made. Neither side budged.

The satyagraha did attract plenty of attention. A 19-year-old Kesava Dev narrates in his autobiography how he was so enthused by the agitation that he risked the anger of relatives and travelled to Vaikom on borrowed money, just to witness it. Its tameness disappointed him, but Dev, an unemployed Nair youth with few prospects and with his career as novelist far in the future, was drawn to Vaikom by the hope that real change and progress were coming to his land. Thousands were similarly moved.

Gandhi kept a close watch on the happenings and gave the local leadership instructions. Many of those who participated in the agitation were from outside Travancore. Firebrand rationalist E .V. Ramasw­ami Naicker, aka Periyar, who travelled from Tamil land to Vaikom, courted arrest and was jailed in Trivandrum, was the most prominent among them. Akalis, who had opened a free kitchen to feed the volunteers, had to leave. Ironically, most Ezhavas kept away as did major Dalit groups.

Gandhi and his followers believed that soul force would persuade the orthodox in Vaikom to change their attitudes and to open the roads. As days passed and the satyagraha lost its initial steam, the attitudes of the orthodox hardened. Some violence was unleashed on the satyagrahis. But, true to their promise to Gandhi, the volunteers did not retaliate. The satyagrahis fasted, women participated. Nothing moved the priests of the Shiva temple. As time went by, a stalemate emerged. A jatha of savarnas, led by Mannath Padmanabhan, one of the founders of the Nair Service Society, marched from Vaikom to Trivandrum, the capital, to merge with a similar procession from Sucheen­dram in the south. Together the marchers presented a petition signed by 25,000 caste Hindus to the Regent Maharani. Though sympathetic, she hedged. Gandhi himself arrived, now designated a state guest. He travelled all over Travancore, meeting people, consulting some and exhorting others. He even met the leader of the high castes at Vaikom, Indanturuttil Nambiathiri, while standing at the distance stipulated by caste rules. He was unyielding and offered Gandhi scriptural injunctions against avarnas app­roaching temples. That Nambiathiri “purified” his home after Gandhi had depar­ted was significant.

Gandhi left and a comprom­ise he outlined was worked out. Three of the roads were opened to avarnas and a new road constructed so that savarnas alone could use parts of the eastern entrance. It had the approval of the Maharani and the British and gave a sense of victory to both sides.

What had began as a struggle for dignity and equal opportunity had widespread repercussions. Gandhism appeared to triumph. Did he understand that the struggle had to be not only against the British but also against home-grown forms of iniquity? Periyar, released from jail, had returned to Vaikom to preside over a large meeting called to end the satyagraha on November 29, 1925. He soon parted ways with Gandhi, realising that the Mahatma would never be a partner in the fight against caste and Hindu orthodoxy. Congressmen were happy because their movement had grown in Kerala. The priesthood and their royal backers probably saw the writing on the wall. The enlightened liberal, the prime mover behind the agitation, who had hoped that theocracy would end and democracy rise, had to withdraw to fight another day.

The struggle for dignity continued. The Temple Entry Proclamation of 1936, hailed as “one of the greatest revolutions in the history of Hinduism” opened not just roads but all temples to avarnas. Neither soul force nor public opinion melted the priesthood’s hard stance. It was the decision of the Ezhava leadership to convert en masse to Christianity, an “electric shock” as the Malayala Manorama observed, that hastened the decision of Chithira Thirunal, the maharajah and C.P. Ramaswami Iyer, his dewan. Ezhava numbers were crucial. Demograhics and politics in Kerala took a decisive turn. Its effects are still visible.

In Kerala today, temples are once again building walls around them. New signboards restrict entry. This time, though, the avarnas are in. Only the mlecchas of other religi­ons are kept out. The festivals and temple arts in which locals of all religions once participated are now exclusively for Hindus. Experiments are still being conducted, but not with truth. The winds that now reach Kerala blast in mostly from the mainland or the Persian Gulf, erecting walls and closing doors. And the high-minded, reformist Ezhava leadership has been replaced by a ring of crass votaries of realpolitik.

P. Vijaya Kumar is a retired English professor, with interest in socio-historical matters.