Feast Under The Shanghai Moon

China is the next destination for India Inc. First-world infrastructure, a booming market and a growing talent pool is drawing them. 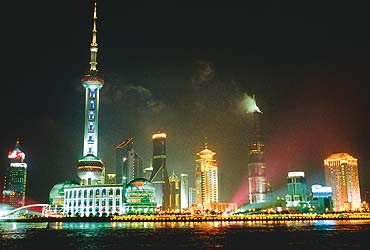 outlookindia.com
-0001-11-30T00:00:00+0553
'Size' and 'Scale'. Invariably, the first-time visitor to China will instinctively find it easier to describe China in these two words. Picture this—a 25,000-km network of eight-lane highways where the traffic suggests it could have done with just four-lane ones. The Shanghai skyline is dotted with over 30,000 (yes, that's right) high-rises. On the roads, it seems the world has forgotten to tell the Chinese about the existence of small and compact cars. The rare small car that you find in Shanghai is a Volkswagen Polo, roughly the size of Fiat Palio.

To put it in perspective, India is converting some of its four-lane highway stretches—a mere 12 per cent of the 65,569 km of national highways—into six-lane ones, Mumbai has 610 high-rise buildings with another 148 under construction, and small cars like 800, Zen and Santro comprise 70 per cent of the country's auto market.

China's overt obsession and inherent advantages relating to size and scale are also visible at a micro level. The Middle Kingdom houses some of the world's largest manufacturing facilities, it offers a market that's several times bigger than India (despite India claiming to have more middle-class consumers), and it has a burgeoning talent pool—all of this makes it an attractive hub for Indian software giants. It's imperative for India Inc to have a strategic presence in this Asian superpower-in-the-making. "To become a global player, the lessons from operating in China are extremely vital," explains Rodney Pereira, L&T's chief representative in China.

At present, Indian firms with their relatively meagre investments in China run the risk of fading into insignificance. There are only about 25 large corporates who are merely keen to identify small niches in the vast domestic market. Total investments by Indian firms barely add up to $200 million so far, when China's net FDI inflows this year alone are expected to be $86 billion. But this is likely to change in the near future. China, it seems, may just become the next hub for Indian firms like L&T, Infosys, Ranbaxy, Sundaram Fasteners, Essel Propack and M&M.

But what makes China tick?

Pereira gushes about the efficient Chinese bureaucracy and its single-minded pursuit of more FDI. "In the last five years, I've never given a single yuan to a bureaucrat or the local party leader. It's been the other way around, they've hosted grand luncheons and dinners, gone out of their way to ensure our business took off smoothly. Soon after we expressed our intent to invest, several provincial governments sent their representatives to woo us," gloats Pereira.

Whenever there's a problem, the local officials are always willing to help. For instance, when the Jiangsu provincial government learnt the L&T factory would take nearly a year to be completed, it immediately offered a 5,000 sq m temporary factory space for a song. Most provincial governments appoint special officers for every investment project and they act as business facilitators. Instead of the company doing the legwork to get administrative and regulatory clearances, the special officers do the required paperwork.

A. Natarajan, vice-president, Sundaram Fasteners, who oversaw the company's investment in China, echoes the sentiments: "I've never gone to meet a single bureaucrat." Sundaram's wholly-owned subsidiary in Zhejiang, 120 km from Shanghai, built at a cost of $7 million, produces fasteners and precision machines for the auto sector. Although it sells a minuscule 5 per cent of its products in the domestic market, it's hopeful of developing China as its biggest markets—bigger than India—over the next decade. For Sundaram, a toehold in the world's fastest-growing auto market is crucial if it has to grow consistently in the near future.

Experts and Indian businessmen who keep touting China's huge cost advantages as the only reason for China's manufacturing success globally are talking out of their hats. Most Indian manufacturers in China refute the cost story. "At best, there's a 2-3 per cent difference in operating costs between the two nations. There's no question of firms using China as a manufacturing base to cater to the Indian market as the labour costs here are rising. More importantly, the Chinese productivity levels are perhaps the highest in the world, and coupled with the infrastructural advantages, it gives China the edge," explains Natarajan.

There's an almost uniform praise for China's first world-like infrastructure. Many Indian executives privately concede that current comparisons between India and China are futile. "India cannot hope to build such infrastructure in the next 25 years. While India is still debating the merits of privatising airports, Shanghai is talking about a third international airport. It took India a decade to decide whether the height of the Narmada dam could be increased by a few metres. The Three Gorges dam (probably the largest in the world) was built in about the same time," laments the CEO of an Indian firm in China.

China's claims of a first-world urban infrastructure are not exaggerated. While Beijing is a mix of the old and the new, Shanghai is a spirited cosmopolitan city that likes to compare itself with New York and London. The special economic zones and the new development areas dotting China's economic landscape are its infrastructure showpieces. Nothing epitomises this better than a short visit to Pudong district, which falls under Shanghai's administration and municipality.

A Golden Gate-kind of imitation bridge leads you across the Huangpu river to Pudong, east of Shanghai. Till the early 1990s, Pudong was made up of vast tracts of paddy fields. Today, it is an industrial and commercial hub. Several landmark structures such as the Oriental Pearl TV tower, the tallest in the world, and the mighty Jin Mao building were constructed to raise the profile of the region. It has mainland China's largest free trade zone, and an industrial area covering 20 sq km. There's also a special area for technology-oriented businesses, covering 20 sq km in central Pudong, which is home to several IT firms, including Infosys.

"While you can develop first-world infrastructure, it's difficult for the local people to acquire a first-world character. But Shanghai manages that," says Shiv Kumar, CEO, Jubilant Organosys' China operations. Even a complete stranger with little knowledge of the local language will find it difficult to get lost or feel unsafe in Shanghai. To add to the excellent public transport, there's an army of Volkswagen Santana taxis with helpful drivers who seldom overcharge.

The same first-world mentality is reflected in China's consumption patterns. China's younger generation and the neo-middle class (200 million compared to India's 250-300 million), which comprises first-generation entrepreneurs and blue-collar workers, are spending. Shanghai's Nanjing Road is the city centre and the temple of China's new religion—consumerism. It seems as if the eastern half of the road, submerged in neon-lit glory, houses more luxury goods stores than the whole of India. Most global brands like Cartier, Rolex, Omega, Prada, Zara, Armani and Gucci have an exclusive showroom here.

With a $2.2 trillion GDP chugging at a rate of 9 per cent, China is emerging as the largest consumer of a variety of products and services. For instance, it's the fifth-largest pharma market in the world and, at present, the second largest in Asia, behind Japan. But it's slated to climb to the number three position globally by '10, with a consumption power of $23 billion. In '06, an estimated 4 million passenger cars will be sold in China, making it the second-largest car market. India just breached the 1-million-car mark last year.

It's important for the Indian auto ancillaries to have a presence in China. Just to cite an example of how the auto components makers can benefit from being in China, Germany's largest carmaker Volkswagen, which is yet to sell a single car in India, gets almost 50 per cent of its annual profits from China. So, if the Indian ancillaries can grab this market, it'll catapult them into the big league. "When China is becoming the factory of the world, and almost every manufacturing company in the Fortune 500 list is present in China, it makes sense for Indian firms too to be close to the action," says Sundaram Fastener's Natarajan.

Similar is the case with pharma and other fmcg-related players. The Subhash Chandra-promoted Essel Propack leveraged its global leadership and economies of scale in the laminated tubes market to dominate China. It gained entry into China in 1997 courtesy its worldwide acquisition of Propack. Today, Essel Propack has managed to garner a 42 per cent share of the Chinese market, being an exclusive supplier to majors such as P&G, Colgate Palmolive and Unilever. "To be successful, Indian companies have to be smart and choose the right market segment. Most Chinese players are fighting on the basis of their cost advantage. Indians should look at brand-building," says Edward Luo, VP (east Asia Pacific), Essel Propack. However, Natarajan warns that "in China, business happens through relationships nurtured over a long time. People hesitate to change suppliers. It will take the Indians some time to build that trust with Chinese firms."

Software firms like Infosys and TCS see China as a steady supplier of manpower talent, and a base to cater to other East Asian markets by sidestepping cultural barriers. Infy's three-storey office in Shanghai is a far cry from its sprawling campus in Bangalore, and it currently employs about 650 people, expected to increase to 2,500 in two years. In comparison, Infy employs 55,000 people in its nine campuses in India.

"But we recognise that China can be our second-most important talent resource pool after India. Just in case there is a shortage of talent in India, China will be able to fill the gap. Our former chairman and founder N.R. Narayana Murthy too is extremely bullish about the Chinese talent pool," says James Lin, MD, Infosys China. The company has invested nearly $10 million in China, and expects to derive 10-15 per cent of its global revenues from there in the next 10 years. Lin feels the skills of Indian and Chinese IT professionals can be complemented. "Indian engineers are very strong in analysis whereas the Chinese are more technology-focused," he says.

TCS, which has a presence in China through its JVs with three state-owned software technology parks and Microsoft, has a three-pronged strategy: to target global customers using China as a base, tackle the Chinese domestic market, and scout for opportunities in the adjoining markets in East Asia. "The banking and financial services sector in China has invested very little in IT so far. With TCS' expertise in this area, we are very well placed to tap this market," says a company spokesperson.

And yet, China has its problems. "We need to take a more balanced view," says Atul Dalakoti, FICCI executive director based in China. "There's great concern about mindless consumption which is driving inflation. Cooling down an overheated economy is top of the agenda of policymakers." Ask Lu Bao Kang, senior editor with Shanghai's second largest daily Wen Hui, and he says: "This isn't the face of China. The young flaunt their wealth but there's a gap between the haves and the have-nots. " In good old Chinese fashion, Lu still cycles to work.