Fear Over The City

Al Qaeda is back, London shudders. But for the people, hit by 'intelligence fatigue', it's all in a day's work. 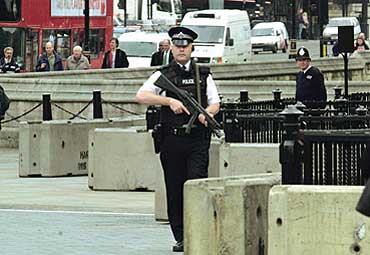 outlookindia.com
-0001-11-30T00:00:00+0553
London's prophets of doom don't have to dig out their old files anymore. They point to the new ring of concrete around the houses of Parliament as validation of their claims that British policies in Afghanistan and Iraq are far more likely to encourage terrorism than eradicate it. Quick developments led to the security scramble here: the tape-recorded call by Ayman Al-Zawahiri, the Al Qaeda No. 2, asking for attacks on British and US targets, the wave of suicide bombings from Bali to Casablanca, news that a suicide bomber in Tel Aviv was a British national from London, and another who failed was from Derby. If some can travel from London to the Middle East for a suicide bombing, others could do it right here. It didn't help that a MI5-CIA 'summit' warned of a "spectacular" attack on Britain.

Intelligence reports in the media sought to give solidity to the fears. They spoke of two men on the loose in Britain trained as suicide bombers by Al Qaeda; one a Pakistani and one a black person. The intelligence source was evidence from the nine British nationals—among a total of about 680 Al Qaeda suspects—detained at Guantanamo Bay. Military artists (there is such a thing in America) drew sketches based on the descriptions and handed them to British intelligence.

But the panic seemed to hit the government more than the people. Perhaps the former knew better. Or perhaps an intelligence reports fatigue has set in. There have been just too many, and not too convincing, of late. The definitive dossier on Iraq plagiarised from the website of a Californian academic, photos of chemical and biological weapons facilities turning out to be nothing like that on the ground, talk of uranium deals between Iraq and Niger proving false, reports of torture of Iraqi footballers proving untrue, above all no wmds. Now you hear of intelligence reports and say, 'Oh, yeah?'.

But few doubt that the terrorist is back, with a new face and many heads. "Thanks to technology and the multinational allure of jehadism, the Afghanistan camps have become unnecessary," says a report from the International Institute for Strategic Studies (IISS) here in relation to the recent attacks in Riyadh, Chechnya, Pakistan, Casablanca, Tel Aviv and Algeria.

Not a camp by a cave, now "notebook computers, encryption, the internet, multiple passports and the ease of global transportation enabled Al Qaeda to function as a 'virtual' entity that leveraged local assets—hence local knowledge—to full advantage in coordinating attacks in many 'fields of jehad'," the IISS report says. Al Qaeda is working in decentralised ways, the IISS suggests. You call these groups Al Qaeda now because you have to call them something. One operation may simply inspire another without the need for an actual link. Al Qaeda now symbolises a particular state of mind.

Evidence the 'war on terror' isn't under control comes from all over: an inability to control Afghanistan outside of Kabul, a growing backlash in Iraq, an explosion of terrorist attacks. But London doesn't feel as threatened as the government thinks it should—and for good reason.

A leader at a Muslim institute here says London was the least likely target. "This is the city where more than one million came out to protest against the war. This is the parliament that has seen the biggest rebellion against a government because never before have so many MPs opposed war. Terrorists will not attack here." Terrorists are not known for making such fine discriminations. But if he's right, then as much as the government protecting the people, the people of London could be protecting the government by doing no more than being themselves. Not the concrete, it's the pedestrians on the outside and many of the MPs within who are the better protection for parliament.