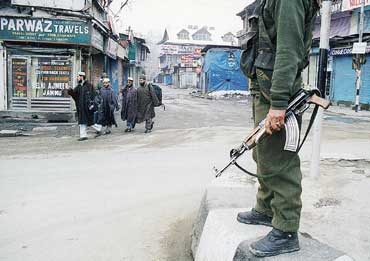 outlookindia.com
-0001-11-30T00:00:00+0553
Mansoor Elahi and his friends were sipping chai (pink salted Kashmiri tea) in one of the congested bylanes of Maisuma near Lal Chowk, once a hotbed of militancy in the Valley, as news of the extension of the ceasefire filtered in through the bbc Urdu service on Tuesday. Crowding around a transistor radio, the motley group listened intently, wondering if Prime Minister Atal Behari Vajpayee had yielded more ground while announcing another month of ceasefire from January 26.

Not that they were expecting more concessions. But they were confused. College lecturer Elahi has many queries: "What happens now? What will be done to take the talks further? Who will participate and what will be their scope?" All this bothers him as well as the others in the group. Elahi's reaction seems to sum up what many in the Valley feel. Says student leader Majid Wani: "Speaking the language of peace and reconciliation is fine, but there needs to be much more." Their tentativeness seems to be valid because the ceasefire, extended for the third time, is yet to provide any promise.

The moot question is: has the ceasefire captured the public imagination in the terror-consumed Valley? Conflicting currents dominate. With the second, post-Ramzan extension barely holding—large-scale violence threatened to abort the exercise—the third definitely came as a surprise. Those in the state government, especially chief minister Farooq Abdullah, were dead against it. He is concerned over what he thinks is a manifold increase in terrorist attacks and the consequent ascendancy of the jehadi groups, thanks to the ceasefire.

As for the public mood, the groundswell of opinion is that despite Vajpayee's seemingly honest intentions, the ceasefire was only operative along the Line of Control (LoC). "We're always being harassed by the security forces and there is no respite," says Ghani Bhat, a shopkeeper in Barzulla, near the Srinagar airport. Complaints of forced intrusion into houses, arbitrary picking up for questioning and detention by the security forces are rife.

Over the past two years, the Special Task Force (stf), a crack team of the state police, which has come in for much official praise for its success rate in smashing militant hideouts, has earned the dubious reputation of being high-handed. It has also been accused of indulging in extortion. The recent custodial killings in Srinagar in the wake of the Lashkar attack on the airport and "encounters" of alleged militants in Anantnag and Pulwama a week ago have only made the situation worse. But this is nothing new for the Kashmiri who has lived with these fears for well over a decade.

Says Mirwaiz Umer Farooq, an executive member of the Hurriyat Conference: "Over the past five days, four student deaths have taken place. Somehow, this ceasefire extension is not addressed to the people in the Valley. It is directed at the international gallery. Otherwise, a framework for dialogue would have been announced." The police, however, rubbish these allegations. Says the state's Inspector General of Police Ashok Bhan: "Every suspect killing, encounter or harassment is blamed on the stf. That is rubbish."

Besides, political leaders in the Valley feel Farooq Abdullah's position is under threat if the ceasefire makes headway. "It is for this reason that he wants to derail the peace process and unleashes the stf. Look for yourself and see how many custodial killings have happened?" asks Yasin Malik, jklf chief and aphc executive member.In his reckoning, Farooq's decision to hold panchayat polls in the state after a gap of 23 years was to undermine the ceasefire. Avers Umer Farooq: "It is a ready invitation for militant groups to escalate violence. What was the need for it now when there is a political vacuum?" So far elections have only been held along the Valley's peripheries—Rajouri and Poonch and parts of Kupwara.

Irrespective of the motive behind the panchayat polls, what is clear is that Kashmiris have not turned their back on politics. Despite the deep suspicion and grievances they nurse against New Delhi, they hope for a revitalisation of the dying political process. Says Kashmir University professor Imran Rahi: "Now that the ceasefire is there, it should not be wasted away." For this, however, there is a pressing need to put in place a conceptual framework for the peace process and lay the groundwork.

Some top intelligence officials here feel a hazy roadmap had been drawn by the pmo while going in for the third round of ceasefire. Says a top IB official: "Despite all the Hurriyat's drawbacks and divisions, the government seems confident of isolating the hardliners." And if the moderate leadership is able to establish its representative character, the government will expect the Hizbul Mujahideen to come out openly and support them. According to another assessment, harnessing of an internal political consensus on the approach to the Kashmir question could lead to elections soon after. While this projected future could be a workable proposition, it does not factor in New Delhi's approach towards Farooq Abdullah and Pakistan. "This is a process which may not have immediate results. It will take some time before it leads to anything tangible," says the official.

Fazal Haque Qureshi, the key Hizb interlocutor in the abortive ceasefire call last year, told Outlook: "If a conducive atmosphere can be worked out now, things can pick up in a real sense." Umer Farooq agrees that the breaking of the ice is "more imperative now than ever before. If talks can happen even in a phased manner, confidence will soar".

According to many in the Valley, if Vajpayee is keen to get off the beaten track and engage in a "bold and innovative" effort to solve the Kashmir riddle, this is the time.

The Breaking of the Winter Chill