Leaves you curiously unmoved and strangely untouched. It has the feel of a TV drama, not a big screen feature 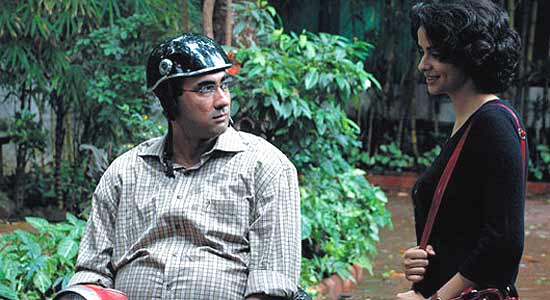 Watching Fatso, you may be reminded of an old Hindi film, Jhuk Gaya Aasman. Rajat Kapoor works on that birth-rebirth motif and reorients it to suit the modern, urban Indian milieu. The movie offers a peep into the changing, evolving friendships and maturing opposite-sex relationships in a city.

Ranvir Shorey, Neil Bhoopalam, Purab Kohli and Gul Panag play close friends, living carefree, happy lives. Gul’s character is in love with Purab’s, looking forward to marrying and growing old with him, till things take an unanticipated turn. Then, nothing remains the same and corporeal issues run into cosmic realities.

While the concept is quite a winner, the situations through which it unfolds don’t quite grab you. Neither do you sympathise with the characters and their dilemmas, triumphs and tragedies, nor is the narration entertaining enough to hold you in thrall.

As a result, the film leaves you curiously unmoved and strangely untouched. Moreover, it has the feel of a TV drama, not a big screen feature. At times, things get too wordy—especially towards the climax, which plays out an overlong Ranvir monologue.

Ranvir plays the titular role of the fat guy with his usual competence and spontaneity although his get-up does not look quite convincing enough. Purab is charming and Neil is the face to watch out for. However, the surprise package is Gul Panag, who reaches out the most with a moving, felt performance.