Elder son and heir apparent Sushanto Roy on his father's health, his responsibilities within Sahara, and the group's future 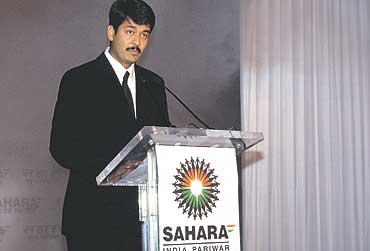 outlookindia.com
-0001-11-30T00:00:00+0553
In his first interview since his father became indisposed, elder son and heir apparent Sushanto Roy talks to Sutapa Mukherjee about his father's health, his responsibilities within Sahara, and the group's future.

On his father's illness
It's just rumour. My father has had, in the last few months, some blood pressure fluctuations. He's disciplining his lifestyle—he eats and sleeps on time, does yoga regularly and also goes for a daily walk. He hasn't been seen in public for some time...I guess that's why there are all these rumours.

On his current business responsibilities
I am heading the mega housing infrastructure project. We are building 217 luxurious, self-sufficient townships. Each township will have at least 3,500 houses and will be equipped with schools, hospitals, multiplexes, hotels, clubs and proper security systems. Infrastructure facilities include round-the-clock electricity and water supply and proper air-conditioning. The minimum area is around 100 acres and in some cities it is as big as 300 acres. Earlier, I was looking after media and entertainment, but now other senior officials are handling it...although I still oversee it. But it's not a day-to-day affair for me. Seemanto (younger brother) is looking after the Amby Valley project. He's involved in aviation too, but he's still understanding the business.

On when he got into the business
I joined five years back. I watched my father operating at work and conducting meetings. He's been teaching us the trade ever since we grew up. It's been like a practical lesson, which has been on for some time. Even now, we interact daily with the chairman and he gives us tips on handling the show. I am confident about the responsibilities and the business environment. I've literally grown up with the company, it's a part of my life, how can I feel strange here with such a strong sense of belonging.

On his areas of interest and hobbies
Whatever is the company requirement, that's my interest. Seemanto and me report directly to our father...whatever we are asked to handle, we take it up as a challenge and get totally involved in it. I love sports. I'm also fond of old Hindi film songs of the '50s, '60s.

On his business philosophy
You don't need extreme brilliance to run a business, what you need is common sense. This isn't an original thought. I heard this some years back and I strongly believe in it.