Father And Sons, Or The Lie Of The Land

An honourable Svengali and his Mujib-speaking protege ply their trade in liberated Bangladesh. Imam weaves a hyper-realistic tale of tragedy, farce, idealism and power. 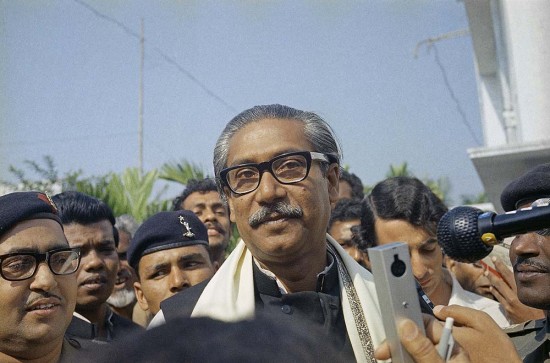 “In 1974 alone, over one-and-a-half million people died in Sheikh Mujib’s liberated Bangladesh. How big was that number? Five times the number of Bangladeshis killed by Pakistani forces during the entire period of the liberation war in 1971. No natural disaster had claimed so many lives since the beginning of our national calendar. No ruthless tribal landlord or Maharajah in our history had been the cause of so many deaths in the subcontinent. No religious clash, territorial disagreement, or deadly disease subjected our people to helplessly witness the untimely decline of such an astronomical number of lives.”

This passage appears not anywhere near the beginning of Neamat Imam’s The Black Coat, but well past halfway through this astounding 256-page novel.

Imam, a Bangladeshi-Canadian wri­ter-playwright, first came across An Unfashionable Tragedy, Australian journalist John Pilger’s documentary on the 1974 Bangladesh famine in 2005. In the film, he heard Sheikh Mujibur Rahman, the father of the Bangladeshi nation, tell Pilger that around 27,000 people had died during the April-October 1974 famine. Imam began to look up different foreign sources and was shocked to find that the actual number was about one-and-a-half million. Which is when he decided to approach Sheikh Mujib as a contemporary Bangladeshi politician, one who “distorts information, lies, cheats and thinks irresponsibly”, bearing all the traits of a dictator.

It is exceedingly rare to find historical revisionism in the form of a fine work of fiction. And yet, that is what The Black Coat is, doubly remarkable that its aesthetic powers as a novel are not diminished but actually magnified by the strategic intention it comes loaded with. Imam opens the curtains with Khaleque Biswas, an idealistic journalist with...