We must ask ourselves if the media and the marketers are doing us a favour by injecting such hyper-nationalism as they collectively raise unrealistic hopes of India's conquests. 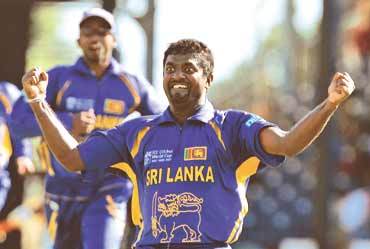 outlookindia.com
-0001-11-30T00:00:00+0553
I told-you-so journalism can be both exasperating and juvenile. Thus, I get no pleasure in reminding you that four weeks before our determined fifteen left for the Caribbean, I had lamented: "Am I the only one turned off by Indian cricket? I'd much rather relax watching an old film than see our boys wield the willow. The occasional fluke victory is all we can hope for. The team looks pedestrian and, frequently, pathetic. Sehwag is a shadow of himself, Tendulkar's brilliance is rare and awkward, Dravid is no longer the Wall, Pathan has lost his swing, Kumble seems ancient, Kaif can't make the eleven.... The boys are more in the news for fights, controversies and leaks, with Greg Chappell adding to the name-calling. Team India, above all, is a boring side; they may win occasionally, but losing is their natural style."

Our two disgraceful performances in the World Cup prove once again that the Indian fan's love affair with his team is a one-sided, indeed fatal attraction. We were comprehensively beaten by rookie Bangladesh and against Sri Lanka we were never in the match. Both Sri Lanka and Bangladesh are estranged SAARC countries and I suspect there must be huge satisfaction in Colombo and Dhaka that Big Brother has been taught a lesson on the playing field at least. One positive fallout of our ignominious exit could be a strengthening of SAARC . That is the only silver lining I see in a very dark cloud.

We must also ask ourselves if the media and the marketers promoting the prospects of the home team are doing us a favour by injecting such hyper-nationalism as they collectively raise unrealistic hopes of India's conquests. The martial music, the thumping of chests, the shouts of "India, India", the painting of the national colours on faces, the patriotic exhortations of politicos suggests that the Cup is already in the bag; the winning is just a formality. When we experience not just defeat but a sound thrashing, the Indian cricket fan, who has been duped by slick promos and to some extent his own credulity, finds reality intolerable. If, instead, expectations were kept at a reasonable level we would not undergo such a tremendous feeling of being let down. We could cope with the disappointment.

No other team in the World Cup, not even the Aussies and the Proteas, play under so much pressure, most of it induced by greedy advertisers hoping to exploit the passion for the game. I believe this exploitation has gone on long enough. The market must stop playing with the emotions of a nation. Meanwhile, we should remember we have just lost a game of cricket. We are not finished as a nation.