VHP wants blood, to give them martyrs that could help them seize the State 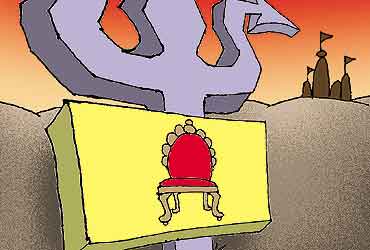 outlookindia.com
-0001-11-30T00:00:00+05:53
I'm being compelled once again to write a column at that awkward time when the event that is its subject has not yet occurred, but will have done so before my essay sees the light of day. The event is the 'Sankalp' and 'Dev Darshan' programme of the Vishwa Hindu Parishad at Ayodhya, and the date is October 17, past my deadline. Despite this handicap, it is possible, indeed necessary, to warn against its potential for further damaging the pluralism that is the bedrock of Indian unity.

It is just possible that October 17 will pass off peacefully. If that happens, it will be a tribute to the police and local administration, to Mulayam Singh Yadav for his firm handling of the confrontation, and to the central government for its unflinching support of the state government as it battles to maintain order and enforce respect for the Allahabad High Court's blanket prohibition against holding any religious programme anywhere near the disputed site. But it is just as likely, perhaps even more so, that there will be violence in Ayodhya on that day. The reason is that provoking violence against itself is the express purpose of the VHP 'Dev Darshan'. Indeed, the most deeply cherished hope of its leaders is probably that a few 'Ram sevaks' will die at the hands of the police or paramilitary forces. That will give them the martyrs they are looking for in their struggle to seize the Indian State. Religion, therefore, has absolutely nothing to do with the current confrontation in Ayodhya.

On October 30, the day of the showdown, the paramilitary forces in front of the Babri Masjid inexplicably melted away. Equally inexplicably, someone opened the gate in the protective fence around the mosque. In no time at all, hundreds of young men swarmed the mosque and began attacking it with pickaxes, rods and shovels. Within 25 minutes, however, the state administration got the situation back under control, without inflicting any casualties or opening fire on the 'kar sevaks'. But the government's relief was short-lived. Late the same afternoon, the state's intelligence services came to know the VHP was planning a second concerted onslaught on the masjid on November 2. That was the day of Sharad Poornima, both auspicious and holy for Hindus. The purpose, the State Intelligence Bureau came to know, was to harvest a crop of martyrs for 'Hindutva'.

On November 2, the VHP put hundreds of sadhus in the vanguard and sent wave upon wave of 'kar sevaks' against the massed ranks of the police. In all, 21 people died in police fire, 16 in Ayodhya and five on the other side of the Gomti as police battled to stop them from crossing into Ayodhya. Yadav's PR machine thus put out the figure of 16, but the sub-editors of Amar Ujala converted it into 116, while Dainik Jagran reported 200-300 'kar sevaks' had been killed.

That was all the VHP needed. In the following weeks its cadres took processions carrying the ashes of the 'martyrs' through villages all over India before consecrating them to various rivers. The exercise in mass psychology, worthy of Dr Goebbels, proved an instant success and the BJP's vote jumped from 11 per cent in 1989 to nearly 22 per cent in 1991. Seven years later it came to power in New Delhi

But isn't that the main difference between 1990 and 2003? The BJP is already in power, so what will the VHP gain by using these tactics again? The answer, as Praveen Togadia has made clear, is that this time the VHP's enemy is A.B. Vajpayee and his BJP/ NDA government. The VHP and the Bajrang Dal have been chafing at the bit ever since the BJP came to power, because Mr Vajpayee has given priority to cementing the BJP's relations with its coalition partners. This has proved spectacularly successful, but has left the two Hindu chauvinist organisations out in the cold. Since late 1998 itself, they have been making sure that Vajpayee knows they cannot be slighted in this way after having (in their eyes) catapulted the BJP to power.

They first did this by targeting Christian missionaries. When the Staines family murders discredited this tactic, they turned their attention to the Muslims. Godhra was a heaven-sent. The BJP's victory in Gujarat last December seemed to vindicate the VHP's belief that Muslim-baiting was the surest road to success. For two months, Messrs Vajpayee and Advani had their backs to the wall and Narendra Modi rode high, threatening to emerge as the BJP's new icon. Then the party's crushing defeat in Himachal at the end of February exploded that bubble. Anti-incumbency was still a far more powerful sentiment than communal animosity. It was Vajpayee and Advani's turn to heave a sigh of relief.

The fall of the BJP-Mayawati government gave the VHP its third chance, for it freed its hands to raise the Ayodhya issue in its home ground. So far the ploy has not worked. The VHP rally in Lucknow had a crowd numbering hundreds instead of thousands. The Delhi rally last Wednesday was far from impressive and almost certainly cost the BJP still more support by snarling up traffic for hours at a stretch. The mahants of Ayodhya too did not want the 'Dev Darshan' to take place. Unfortunately, all this has made the shedding of blood on October 17 more, not less, important to the VHP.