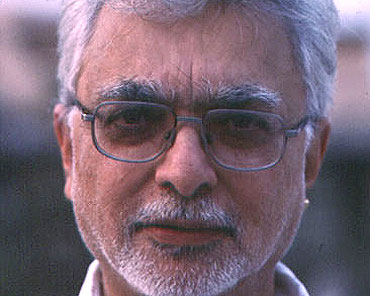 I’m not a formula writer and no quantity of fat cheques will get me to be one. But I do wish producers would continue to approach me.

Does your arrival in Bollywood have to do with experimental scripts seeing fruition?

Bollywood is changing just as the audiences. I look forward to their progressive expectancy.

Is ‘Bollywood thriller’ a comedown for you or do we see something really thrilling?

Watch this space, you will know.

The ingredients of a Bollywood thriller are...

Are you excited about the film scene here?

Has it moved from the typical masala movie?

Yes of course. Though it keeps going back since producers want to play safe. Hatke is all.

The first three are cooperative efforts while the last is individual. In a novel, you cannot blame anybody else.

Which is the most satisfying?

One which delivers the largest cheque.

Will Mahabharat for Star Plus be different?

It’s far more sophisticated, catering to the general public because today’s viewer is well educated in the grammar and technology of modern television. It’s a traditional Mahabharat in contemporary avatar.

What are the highlights of your tenure at Channel Four?

An excellent coffee machine installed in 1993.