It's a service that answers farming queries from crop insurance to the impact of WTO. Call now. 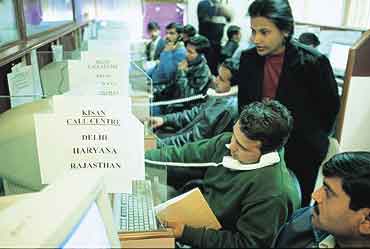 outlookindia.com
-0001-11-30T00:00:00+0553
It's Sanjeev Phogat's first day at work and his colleagues are already patting him on the back for a job well done. "He made the PM laugh, we now call him the PM's hero," says his supervisor. This 26-year-old agriculture postgraduate from Haryana could not have asked for a better start to his career as a call centre executive.

The first phone call he attended was from Prime Minister Atal Behari Vajpayee who called the toll free number 1551 on January 21, kicking off the country's first ever call centre for farmers.

But the PM got no special treatment from Phogat, who insisted on asking the PM his name and phone number since that is what he has been trained to do. He did not give up even after the PM tried telling the enthusiastic Haryanvi to count him among farmers who don't have phones! "I had to follow the script. It would not have been good to show formality with the PM. Duniya dekh rahi thi (the world was watching, since the inauguration was live on TV)," says a delighted Phogat.

Nine more young men, most of them agriculture postgraduates from universities of Hissar and Meerut, sit in a small, dingy room in a nondescript building of Delhi's commercial district, Nehru Place. They receive calls from farmers in Rajasthan, Haryana and Delhi between 9.30 am and 6 pm.

A far cry from the posh BPO offices that dot the landscape of Gurgaon and Noida around Delhi. No cafeterias, no chrome and glass decor, no headphones or soundproofing, not even speakerphones. And the boys like Phogat are not your American-accented, mall-hopping types who juggle two to three job offers at any given point of time. Quite literally sons of the soil (Phogat worked on a farm before joining here), they welcome each caller with a "jai kisan," and answer queries on plant protection, agricultural prices and even on the likely impact of wto, all in the regional farmer-speak.

Though it's an agriculture ministry project, the running of the call centres has been outsourced to a Dalmiya group company, dss Infotech Solutions. It runs centres in eight cities and has hired a total of about 80 executives who, between them, attend to about 2,500 calls a day. The project will cost the ministry around Rs 4 crore annually for the next three years. Along with the call centre, the ministry has also launched a Krishi television channel, and plans to use the FM stations of air to relay programmes for farmers, beginning this month. The government expects to spend close to Rs 300 crore on the last two initiatives in the coming three years. Says agriculture minister Rajnath Singh, "My attempt is to use technology to revamp and deliver knowledge and information to farmers effectively."

The call centre project is part of an ongoing "extension" programme of the ministry, which can also be termed as the "lab to field" mission, where ongoing agricultural research in various universities can reach the end user—the kisan.

At the moment, the extension work is being carried out through the 500-odd Krishi Vigyan Kendras (KVKs) in the country. But as agriculture secretary R.C.A. Jain says, "The present extension system is proving increasingly inadequate to meet the needs of a farmer in a fast-changing agricultural scenario. And a call centre can add value to whatever the farmers are doing."

Cut back to that low-ceiling, dimly lit call centre in Delhi. Twenty-one-year-old Navneet Yadav is flipping a horticulture journal to answer a caller. The room is scattered with Hindi magazines and books on plants and fruit cultivation that serve as ready reckoners for these boys. Besides, he has just received a query from "one ladies" who wants to know the virtues of the Aloe Vera, as she wants to start her own "cosmetics business".

Another Jat calls to spit venom, demands that the government should go, while another is just curious whether the number 1551 is for real.A farmer wants to know whether it will rain again while another has a problem with his mustard crop, a third calls from his mobile, he is not speaking in English mind you, and asks whether he can get his crop insured.

Just a day's work in the country's most unusual call centre.