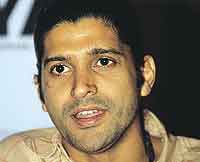 Is opposition to Bollywood films portraying Pakistan as the enemy justified?
Relations have improved. But if we don't talk about the past, it gives us less reason to learn from it.

How have you dealt with this in Lakshya?
This film is less about war and more about a boy's journey to self-discovery. We're not taking a political stand in the film.

Hasn't LOC already told the Kargil story?
This film focuses on the boy with war as the backdrop.

What are the similarities between the heroes of Dil Chahta Hai and Lakshya?
Hrithik's character is quite like Aamir or Saif Khan's in Dil Chahta Hai. The two share the same struggle. The context is different but they discover themselves in the course of the movie.

Will this film attract a very different audience from Dil Chahta Hai?
Films find their own audiences. I'm often surprised at the kind of people who tell me they loved DCH.

You are ready for your next venture?
We're making my sister Zoya's Lucky...