Calcutta sang a dirge like no other when Mother passed away 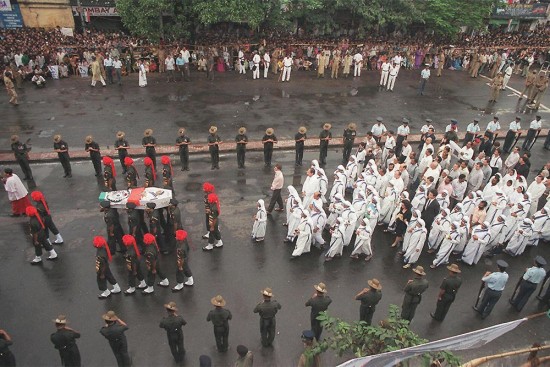 I was all of sixteen and a fresh entrant into St. Xavier’s College when the news of Mother Ter­esa’s death began to spread through the streets of Calcutta like wildfire. I clearly remember running the one-and-a-half kilometres that separate my house from Mother House to verify if the news was true. A crowd that was growing by the minute was outside Mother House and someone had hung a framed picture of Mother Teresa and had put a garland around it. That image of Mother’s picture, with a garland draping it, was the only verification that I probably needed. “That’s it, she is no more!” my mind and heart mourned. I took a rather meandering path home to cope with this enormous feeling of grief that was bubbling inside.

Since my earliest memories, Mother Teresa was a ‘constant’—an anchor figure held by my family and eventually me as the gold standard of compassion and care. And now, suddenly, she was no more! Reaching home, I found my mother waiting anxiously for me. I thought I would be reprimanded for being away from home without permission, but my mother said I needed to call the parish priest immediately, because he had called looking for me. I went to the parish as any God-fearing Catholic boy would do—for no one disobeys the summons of the parish priest—to be told that Mother’s mortal remains would be laid in state at our church. He asked me and a few other boys to take leave from college and to be available for all the seven days, to be of help and assistance. The work we were tasked with during those seven days of grace was varied and ranged from ushering the endless line of mourners into the church to helping the sisters prepare Mother’s mortal rem­ains for transfer to the Netaji Indoor stadium.