Feeling betrayed by the BJP, the Sangh ups its vicious ante, holding governance to ransom 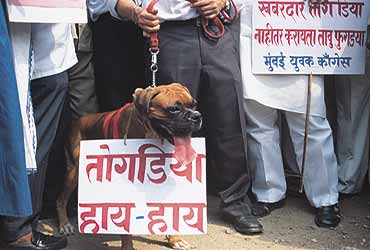 outlookindia.com
-0001-11-30T00:00:00+0553
They say with pride that they are the guardians of Hindu dharma. Their self-proclaimed selflessness and commitment, they claim, cannot be questioned. And yet they enjoy being power centres the nation has to contend with. The prime minister talks peace with them. State governments pander to their demands. They appear above the law. They spew venom, ridicule minorities and call for the formation of Hindu suicide squads to fight Muslim fundamentalism. Before the announcement of any policy, it is their views that are sought. Before making any move, many in the government, including cabinet ministers, solicit their approval. When they sneeze in Mumbai, Nagpur or New York, New Delhi catches a cold.

Welcome to the new, extra-constitutional world of India’s loony right.

The figureheads are well known. Bal Thackeray, Ashok Singhal, Praveen Togadia, Narendra Modi, Vinay Katiyar, Acharya Giriraj Kishore.... Their rabble-rousing rhetoric is there in print and on television for everyone to see. And the more their extreme posturing is given coverage, the more pleased they are with the world (see Press-Ganged Centrestage). And yet these gentlemen, who have made the business of abrasive quotes a veritable cottage industry, complain that they have been misunderstood and painted black by "pseudo-secularist enemies of India".

Last week, VHP international working president Ashok Singhal was a picture of mystification and hurt. "Why does everyone call us names? The Congress is abusing us every day. After all, what have we done? What has Togadia said? Jehadis have entered the Congress and are attacking our offices all over the country," Singhal grovelled, before disbelieving reporters could put across their thoughts on political extremism.

Were the "loony right" merely indulging in verbal pyrotechnics, it wouldn’t have been so bad. But they have now begun attacking government policies, the BJP’s political allies, minorities and constitutional authorities. And if this is not enough, the saffron extremists also want to be on the centrestage of politics, notwithstanding the harm they are causing their own government. The attacks are all-encompassing, the ambit of the monologue seamless. And when it comes to dialogue, the tenor is designed to inflame passions and is actively backed by bellicose demonstrations—and if need be, physical intimidation—to show their strength on the ground.

Sample some of the rhetoric the Extreme Right has spewed in the last few weeks:

Is there anything at all that can be done to rein in these practitioners of this brand of hate politics? Given political will, there are several sections of the Indian Penal Code (IPC) which directly invite penal provisions. Says Supreme Court lawyer Prashant Bhushan: "Most of the IPC is dedicated to maintaining peace and public order. On a number of these counts, this government and its affiliates stand indicted." Listed under are some of the relevant IPC provisions:
Trouble is, these provisions in the law are applied very rarely. And even if they are, the case progresses at a snail’s pace and is often forgotten or put in deep freeze. Says Congress spokesperson Jaipal Reddy, "The government is not interested in taking action against these people because they are, after all, from the same family." Adds CPI(M) leader Somnath Chatterjee, "The dignity of politics and the level of debate has reached gutter proportions, thanks to some saffronites. And if you expect criminal action against these people by their own government, well, obviously it is not coming."

Lawyers like Bhushan point to the lack of political will. He argues that relevant portions of POTA can easily be invoked against offenders. According to him, Section 3 of the act clearly states that ‘terrorist acts’ cover whoever "with intent to threaten the unity, integrity...to strike terror in the people or any section of the people...or threatens to kill or injure such persons", and thus qualifies for indictment. "If SIMI activists can be booked under POTA, why not saffronites? Singhal saying openly that a successful experiment has been carried out in Gujarat and may be repeated in other parts of the country is a blatant act of terrorism. Why has no action been taken against him?" he asks.

The key question is, can the exigencies of politics allow the government to act? Some BJP leaders say that while outwardly there is a battle of attrition raging within the affiliates of the Sangh pantheon, a larger gameplan is in operation. Says one veteran BJP leader, "Any practicing politician will tell you that there is overt and covert politics being played out. While people like L.K. Advani are overt politicians, Togadia is covert. There is not much difference in what they are saying. It is just the language that is different. Advani is in the government. Togadia is outside it. So Advani’s speech has to be restrained, while Togadia is a free man. After all, people like Togadia, Modi and Singhal are basically doing our work, saffronising the scenario.The BJP itself is nothing but a patchwork of various Sangh platforms."

BJP strategists also argue that such language may render the ‘urban’ press aghast, but it does serve a larger purpose. Says one BJP leader, "If Thackeray talks of Hindu suicide squads, there is a feeling that India has taken Pakistan-backed terrorism lying down for far too long. It appeals to people’s sentiments." But sociologist Ashis Nandy does not believe such tactics will yield the BJP any dividends. "The words of Modi, Singhal or Togadia are acts of desperation. It is a last-ditch effort to at least keep their core constituency intact. To say that the BJP will gain electorally would be to put too optimistic a spin on the situation. There would be 10 or 15 per cent people who believe in these rantings. They are cannon fodder for the party."

Some like lawyer Rajeev Dhawan say that legalities apart, what is required is a political and social baseline. "Has the PM strongly condemned the statements of his allies like the Shiv Sena? Is he in a position to do so? When Enoch Powell made his ‘Rivers of Blood’ speech in England in 1968, he became a parliamentary leper. No such stigmatisation has followed here." There is another problem public-spirited lawyers like Dhawan see. "If you file a criminal case against any of these extremists, you also have to sue the newspaper or publication where the statements have been carried. That simply enlarges the scope of litigation."

But the other question is, why is the "extremist fringe" becoming so loud and demanding now? Togadia puts it bluntly: "We’ve been well-wishers and supporters of this government. It is high time they cater to us." Basically, it is a matter of the VHP’s own survival. For it, the BJP-led government has been a huge let-down. Four years into power and not one of the VHP’s demands has been met: there is no national law against cow slaughter, conversions have not been banned and most appallingly for the VHP, the Ram temple issue, on which the BJP rode to power, stays in cold storage.

The RSS too supports the VHP’s view that some sort of movement has to be made on this front. Says RSS spokesperson Ram Madhav, "We believe it is possible for the government to argue in court that the undisputed land next to the site should be handed over to the Ram Janmabhoomi Nyas to start construction of the temple." Basically, both the RSS and VHP refer to the formula offered by the Kanchi Shankaracharya earlier this year. The BJP, however, would prefer to skirt the Ayodhya issue as it sees no further electoral gains in it.

With only two years left for the BJP at the Centre, the Sangh parivar believes time is running out. Which is why it has gone on the offensive. Says another highly-placed RSS strategist: "The bottomline is that the BJP keeps saying that the NDA is made up of several parties. But they forget there are two more allies giving it outside support—the RSS and the VHP. Whenever the tdp wants something, it threatens to withdraw support and the Centre responds by giving Andhra Pradesh some more funds. Similarly, the VHP wants a few acres of land in Ayodhya and the RSS wants to push its ideological agenda. It is the price the BJP must pay for our support. Or else we too can withdraw."

The threats of this so-called "fringe" have already had an impact on policy.Ever since the parivar onslaught began some months ago, the BJP has been caving in to pressures on various fronts. Disinvestment, for instance. Says a senior RSS functionary, "We believe we are winning the disinvestment war." Madhav is more diplomatic: "We are happy the disinvestment policy is being reviewed." Then, last week BJP president Venkaiah Naidu was clearly playing to the parivar gallery when he demanded that all states frame laws banning conversions. The party also announced that a ban on conversion will be a key feature in its manifesto for the Gujarat elections. And highly-placed BJP sources also say that they believe the Vajpayee regime will again make some sort of conciliatory moves on the Ram temple issue.

On their part, BJP strategists do admit that the party will be nowhere without the support of the Sangh parivar cadres, particularly as it faces a number of vital assembly polls in the run-up to the 2004 general elections. Says a BJP general secretary, "When Atalji first took over as PM, we could afford to ignore the parivar and give priority to our NDA partners. But now as we head towards another election, we need them more than ever." Which is why the BJP has been cautious in its response to the VHP’s attack.

So, given the kind of symbiotic relationship the BJP has with the parivar, it’s very unlikely that the government will act against it. At best, it can organise peace parleys. Or mildly and covertly denounce statements made by some of the Sangh leaders. But bringing them under the law that applies to all other citizens is, as any BJP leader will admit, beyond the pale of the Vajpayee government. That’s safe and sound enough ground for the extremist fringe.

A Lecturer In Prison