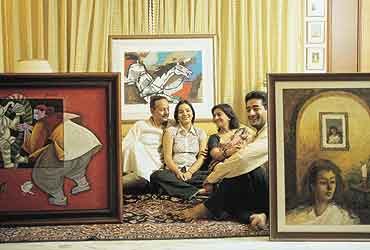 outlookindia.com
-0001-11-30T00:00:00+0553
This isn't about Tyeb Mehta's majestic Celebration soaring to $3,17,500 in a Christie's auction. It's about finding and falling in love with your own celebration. Yogesh Jain knows that. Within a year of deciding he wanted something "visually delightful" on his walls, this dealer of two-wheelers has amassed 25 original works of art. They range from a Debashish Bhattacharya cityscape priced at Rs 3,000 ("including the frame") to a Satish Gujral worth Rs 3 lakh.

Meet the new breed of art collectors: middle class with some cash to spare. Suddenly, the art world is no longer the preserve of the super-rich. And gallery owners and dealers are reworking every pricing and promotion strategy to woo this fast-growing flock of art aficionados.

Of course, many of the arrivistes may be art greenhorns. Jain's collection, for example, is based solely on the need to own works that "arouse a feeling of joy". Dismissing abstracts as "too complex," he buys art that is "sensuous" or nature-inspired. Manisha Pant's desire was even simpler: she wanted to own a landscape with "lots of trees". They searched for that dream picture in many pricey galleries and found it at a Lalit Kala Akademi exhibition. "It was a painting by Aruna Nene Chopra. It was perfect!" An exchange of Rs 5,000 found the Pants with a grand vista right in their drawing room.

Such free-spirited romps into Indian art by unlikely collector-aspirants prompt Apparao Gallery owner Sharan Apparao to dub the Indian artscape "exciting". She links this trend directly to the upswing in the economy and efforts to repackage art. Known for her accessible exhibition themes, Apparao believes in investing in product presentation. Her art-cum-furniture exhibition 'Bad Taste?' fused the talents of designer Puja Nayyar and artist Bhibhor Goswami to create a new line of installation-art furniture. Her 'Vamp and Villain' exhibition had Bollywood as its muse. Both shows attracted new buyers. In a market that relies mainly on hype, these innovations helped push sales.

The Singhs—Jassi, a plastic dealer, and his wife, Mani—typify the new Indian art buyer. They decided a month ago that art was the next "in" thing. They promptly spent Rs 12,000 on four small canvasses and Rs 40,000 on a larger work. Clueless about different artists and styles, they are now taking a breather and plan to study the market some more before increasing their collection.

Kalyani Chawla, who recently opened her gallery Montage Art, says she interacts with many such couples. "It is an exciting time. For a person like me, it is a chance to build a business out of something I love." Opening up to the possibilities, most of her buyers want to "talk art" before picking up something they like. "They are not running after labels but want to buy a work they can wake up to in the morning," says Chawla. Starting with smaller pieces, some start saving up to buy "serious art". Chawla now plans to organise workshops and lectures on contemporary art that will cater to first-time buyers.

Dealers are also trying to make the buying process easier. Shallow-pocketed gallery-hoppers can now pay for art in instalments. "It is a matter of trust between gallery owners and clients," says Chawla. "This way people can buy good pieces without feeling the pinch. I bought my first painting like that!" Aporajita Pal Mukerji, who runs virtual gallery artsacre.com, corroborates this trend. "People take loans to pay for art, pay in instalments or post-dated cheques. Some simply book the painting, work hard for a couple of months and come back with the money".

Mukerji, who has been selling art over the internet since March 2000, finds the new buyer very different from the traditional collector. "Most of them buy what they like.So there is a big shift away from signature buying. They have no qualms about asking for advice and are eager to learn, acquire knowledge on art." She believes this young generation will provide the impetus to change the way the world looks at Indian art.

Milking this phenomenon, Delhi's Ashoka Hotel's Art Café # is aimed primarily at the young crowd who would stop for a bite before partying the night away at the discotheque. "The concept of an informal gallery was pretty well received," says Shitij Harnwal, assistant manager. Now open only in the evenings, Art Café # will be relaunched by January as an around-the-clock eatery-cum-affordable art gallery.

The Ravi Jain Centre of International Art that opened in Delhi September too plans to attract the middle-class art buyer. Owners Uma Jain and son Uday, who also run the country's oldest art gallery, Dhoomimal, want to change the notion that art is only for the rich. Uma has earmarked a section for "reasonably-priced" paintings. These works, mostly watercolours by new and established artists, range from as little as Rs 2,000 to Rs 6,000. Guided tours, aimed at educating the public about contemporary Indian art, are also on the anvil. Says Uma: "At present we have tapped probably only 10 per cent of this nascent market. Publicity and marketing will easily push up sales once the middle-class buyer understands that owning art doesn't need to be an expensive hobby."

Uma's clients range from doctors and young salaried executives to newly-weds who want to have "something special" in their homes. She targeted these new spenders during the Trade Fair at Delhi's Pragati Maidan last year, where she put up a stall. "What was heartening was that many artists even reduced their prices because they knew we were reaching out to a new segment." The response was encouraging with many people stopping by, intrigued by the prospect of owning a painting. "A good painting is like an heirloom, far more precious than any gizmo, clothes or jewellery. If people can browse for clothes, why not art?" reasons Uma.

If the Indian art market is finally maturing, it has this new adventurous middle-class art lover to thank.