Female foeticide is condemned as the sex ratio drops in Punjab 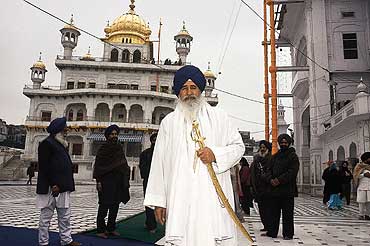 The Akal Takht's pulse rate has quickened once again as it finds itself rudely jolted out of its routine rhythm. The difference, however, is that this time around it's not some ticklish politico-religious controversy that's grabbed its attention. Instead, the alarm bells have been sent ringing in the highest religious body of the Sikhs, thanks to the declining female to male ratio in Punjab. The takht has come down heavily against the practice of female foeticide which, it believes, is to be blamed for the shrinking sex ratio. Says Akal Takht jathedar Joginder Singh Vedanti: "In accordance with the Sikh rehat maryada—Sikh religious traditions—anyone indulging in the unhealthy practice of female foeticide would be excommunicated or declared a tankhaiya. Women have always held a position of esteem in the community. The practice of female foeticide must be roundly condemned."

The Sikh clergy has taken upon itself the task of restoring the sex ratio of Punjab in general and the Sikhs in particular so that they at least match the national average. At a meeting last fortnight, the Sikh high priests adopted a resolution proclaiming that the status of women in Sikh society is equivalent to that of men. Vedanti has also stated that sex determination tests go against the basic tenets of Sikhism.

What is really worrisome, one might even say alarming, is that against the national average of 933, Punjab with 874 females to every 1,000 males now ranks 29th in terms of sex ratio. Only Haryana and the Union Territories have sex ratio lower than that. From 832 in 1901, Punjab's sex ratio dropped to 780 in 1911, the lowest ever in the state before it started improving consistently to reach 882 in 1992, its best ever. Ever since it's gone on a downslide once again and chances of it recovering appear rather bleak.

Both Fatehgarh Sahib and Ludhiana topped the list in the dropping ratio of females to males since 1991—871 to 851 and 844 to 824 respectively.

After this year's census released the provisional population figures, the Sikh high priests took a serious view of Punjab's sex ratio and issued an appeal to the entire society not to indulge in female foeticide. The appeal maintains that the social fabric was being disturbed as the ratio of the girl to boy child was on the decline. The "killing of a girl violates the rehat maryada and no Sikh will have any relations with one who indulges in this act. Women have always been held in high esteem in the Sikh society and religion".

Vedanti dipped into Sikh history to prove his point, saying Guru Nanak had pointed out that "women could not be condemned as it is they who give birth even to kings". The Akal Takht jathedar maintained that this directive of the high priests would be strictly enforced to end discrimination, if any, against the girl child.

The growing belief that a girl adds to the burden of a household has led to a surge in the number of female foeticide cases. This macabre scenario has exacerbated further due to the mushrooming of sex-determination clinics across the state. Surprisingly, the dip in the sex ratio has been more pronounced in the affluent cities, although small towns haven't escaped the malaise either.

The meeting, where the strictures against female foeticide were passed, was attended by the jathedars of all the five takhts, besides the other singh sahibans. Though the practice was sharply condemned, no plan of action was announced to check the antipathy towards the girl child. While the Akal Takht's word carries considerable weight, everyone agrees that an awareness campaign has to be launched to put an end to female foeticide. This will have to be followed up with the authorities cracking down on doctors and clinics which help in the perpetuation of the practice. For now, however, the Akal Takht has taken the first but most crucial step.