Conversions come in handy since the neo-convert is a committed activist too. More Coverage 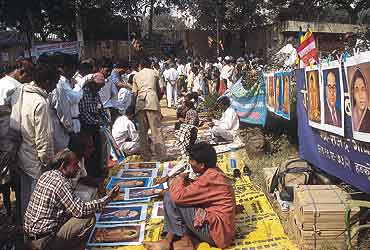 About two years ago, inhabitants of a Dalit village in Bareilly, Uttar Pradesh, were served eviction notices for "developmental purposes" and informed in no uncertain terms that there was no question of the decision being revoked. The landless Dalits were petrified. The district administration would not come to their rescue. The local MP and MLA were of no help either. Matters reached Lucknow where the then Rajnath Singh-led BJP government refused to hear those cries of anguish. The Dalits, mostly Balmikis (the scavenger caste), found themselves utterly helpless. Until they were approached by a local BSP leader. His advice: the administration would only react if they converted. Not to Buddhism or Christianity, but to Islam.

Immediately, a maulvi was summoned. But the state government's express orders—there would be no eviction, the developmental plans had been dropped and the Dalits didn't need to convert to Islam—had beaten him to the village.

Since Meenakshipuram rocked the country in 1981, that has been the overriding trend. A sizeable section of the country's population, passing off under one catch-all term 'Dalits', increasingly finds itself on the fringes of society. Employment opportunities are few, despite job reservations and various government-aided economic opportunities for some Dalit castes. And this sorry state of affairs is further exacerbated when government policies are not implemented. Then, it is open season for conversions.

Political parties have reacted strongly to the recent spate of conversions. The Tamil Nadu government has already passed a bill which makes conversions through inducements illegal. The bill (now an Act), which makes conversions difficult, has been appreciated by the BJP. In fact, the NDA government, sources say, is working on a bill—which might be introduced in the forthcoming session of Parliament "if there is adequate consensus"—along similar lines.

The conversions to Buddhism in Haryana was an emphatic political statement. "Conversions happening in India aren't religious. They are used to extract concessions from an insensitive state. The changes in religion are either politically motivated or are a result of the extreme oppression scheduled castes face, particularly in the rural areas," says Dalit writer D. Prempati, a former Delhi University don and a close acquaintance of BSP supremo Kanshi Ram.

Naturally, therefore, the anti-conversion Act is facing stiff opposition in Tamil Nadu. Asserts Dalit Panthers MLA R. Thirumavalavan: "We'll strongly oppose the Tamil Nadu law since it primarily affects the Dalits. The Dalits are already victims of Hinduised state terrorism. Though we do believe that emancipation and liberation of Dalits are not possible via religion, we shall support conversions as a means of escape from the horrors of Hinduism."

D.L. Sheth of CSDs has two categories for Dalit activists: those in political parties and those working with NGOs. The latter aren't politicians but have their own agenda. The two don't necessarily work at cross-purposes. Political parties like the Congress and the BJP reward their Dalits by giving them high governmental posts, while the NGOs get their due in the form of lavish western funding and a string of international seminars. A surfeit of so-called Dalit NGOs operate out of swanky offices in the metropolises.

While political parties are only interested in coming to power using the Dalit 'card', the endgame of many Dalit NGOs is to chart a still largely unexplored course—floating a regional party. Udit Raj perfectly exemplifies this phenomenon. While he runs an NGO, his political ambitions are plain (see interview).For NGOs like the one run by Raj, conversions come in handy since the neo-convert is a committed political activist too.

But Raj didn't discover this strategy. It was the BSP which actually pioneered it. Kanshi Ram's untiring work in UP in the late '70s and the early '80s coincided with Jagjivan Ram's exit from the Congress, leaving a vacuum in the Dalit political arena. Kanshi Ram set out fill this gap. He travelled from district to district, noting down the names and numbers of Dalit communities. Mayawati is now enjoying the fruits of Kanshi Ram's labour. And many—R. Thirumavalavan and Dr Krishnaswamy in Tamil Nadu and Raj in Haryana among others—have subsequently followed this path.

But Kanshi Ram and Mayawati have been neutral about conversions. To date, the BSP supremo has given no call for or against conversions, because as a BSP MP says, his only aim is to capture power. Adds he: "If conversions could help capture power, he would have gladly done it. As it happens, it didn't."

During the Congress' heyday, the Dalits—then called Harijans—were accommodated in the broad network of caste and community coalition that the party represented. Since the '80s, with the Congress' gradual decline, the Dalit population has been assiduously cultivated by parties and various Dalit groups for votes and conversions.

Maharashtra is a prime example. Once home to the progressive Dalit Panthers, the various sub-castes in the state reflect the typical intra-Dalit feud. This doesn't augur well for joint action by any apex Dalit organisation. While the most powerful of Dalits in the state, Mahars—B.R. Ambedkar's community—are being wooed by the BJP, another lower caste called the Mangs have thrown in their lot with the Shiv Sena. The Chambars (a variant of the north Indian Chamar) are, meanwhile, with the Congress. Ambedkar himself had lost two elections, in '52 and '54, in the face of unrelenting Mang and Chambar hostility.

In UP, Jatavs or Chamars are the dominant Dalit community, who on their own couldn't have formed a government. But analysts like Prempati say that in the days of Dalit mobilisation, Kanshi Ram recognised the potential of the Depressed Backward Classes (DBC), an SC category absolutely at the bottom end of the scale which was in no position yet to even benefit from reservations. Says Prempati: "There are Dalit sub-castes like Rajbhar, important in about 16 assembly constituencies in UP, who don't yet have a matriculate in their midst." It's this DBC that finds the BSP appealing.

The Sangh parivar, at the forefront of the anti-conversion movement, is understandably perturbed at the goings-on. The vhp has also been active in reconversions. But its most visible manifestation has been the Gujarat riots, where the saffronites managed to draft Dalits and tribals to their Hindutva cause. The BJP's Praful Goradia says the latest round of conversions is aimed at "halting the wheels of the Hindu revolution".

Clearly, if the NDA government actually comes forward with an anti-conversion bill—pressured as it is by the RSS to do so—a new domain will open up for India's turbulent caste dynamics.