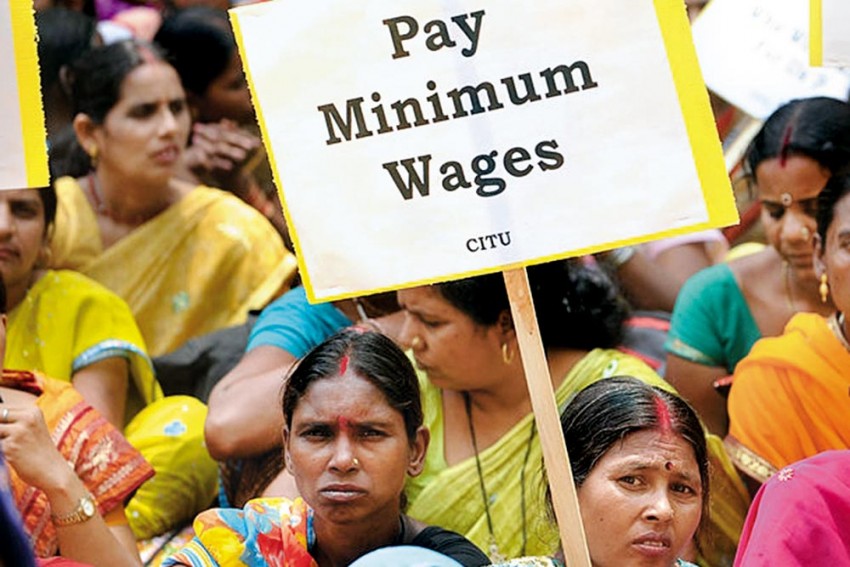 Give Our Dues
The placard says it all at a rally in Delhi
Photograph by Getty Images
Lola Nayar September 13, 2018 00:00 IST Fair Pay For Fair Play 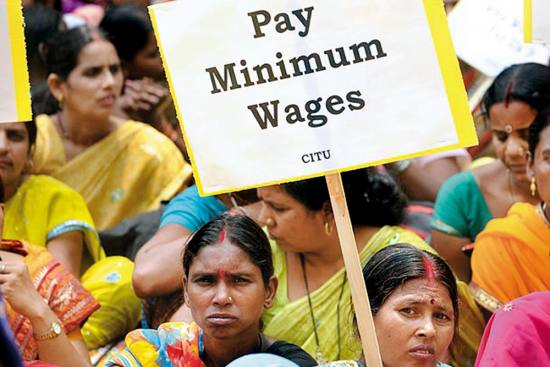 We are worth more. The placard showed the anger in all-caps bold as thousands of people stomped down the boulevards of central Delhi on September 5 shouting slogans and waving red flags for labour rights—most importantly, better wages, a right denied for ages. Among the marchers were landless farm labourers, rallying to a Left-organised event that reprised a common concern for the poorly paid working class population.

Such rallies are not uncommon in India, although it is among the first developing nations to have introduced a minimum wage policy. Yet, the Minimum Wages Act of 1948 has failed in its implementation. The prime reason is that labour laws are on the Concurrent List, meaning minimum wage rates are determined by both the Centre and states, each fixing their own policies independently. And hence, wage disparities between neighbouring states as well as for federal projects are common. Take Maharashtra, for instance. Despite being an industrialised state, it offers one of the lowest minimum wages—lower than Kerala, Haryana or Delhi. Bihar, UP and West Bengal are equally bad in implementing its own minimum wage rules.

The Centre and states fix their own minimum wage rates. Hence, wages differ and are grossly inadequate.

The problem is there is no uniform minimum guaranteed wages. The draft Wages Bill 2017 too has not fixed or mentioned any amount as national minimum wage, according to a government statement issued last year. Low pay and wage inequality are serious challenges in India’s path to achieving decent working conditions and inclusive growth, states the India Wage Report of the International Labour Organization (ILO) released in June. The ILO says the average wage in India in 2011–12 was about Rs 247 a day and an estimated Rs 143 for casual workers.

But things could look up, according to Virjesh Upadhyay, the national general secretary of Bharatiya Mazdoor Sangh, the labour wing of the RSS, as the government is trying to bring a national floor minimum wage. “It is a first. It means the Centre will decide the minimum wage below which no state can fix wages,” he says.

All trade unions favour the Seventh Central Pay Commission’s formula—fixing wages by providing 20 per cent value to calorie intake and another 20-25 per cent for medical and welfare issues. “In 2013-14, according to this formula, the minimum wages were determined to be Rs 22,000 (a year) but later the trade unions agreed to accept the pay commission’s recommendation of Rs 18,000. That is the concept we are fighting for,” senior CPM leader Tapan Sen says.

The unions feel the minimum wage should be considered as the bottom line, not the end-line. For instance, Kerala has fixed Rs 15,000 a month as the minimum wage based on Rs 600 a day. Delhi has recommended Rs 14,000. Haryana has a formula for periodic upward revision of minimum wages. But barring Kerala, no other state is ensuring implementation of its minimum wages, alleges All India Agricultural Workers Union general secretary A. Vijayraghavan. “In many states, to circumvent the minimum wages or to save on the payout, whether in agriculture or small industries, more women are being employed as they have to be paid less. This is true even in hazardous jobs.”