Faded Leaves From A Mughal Spring 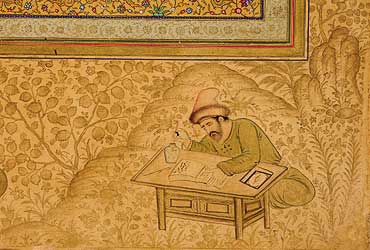 To be true, the world got its first glimpse of Gulshan 70 years ago at an exhibition in London. It created a stir, even though it was a brief and tantalising peep into the oft-mentioned but never seen album. Jehangir's collection of Persian miniatures—only a small part of the historic album—found display at the International Exhibition of Persian Art at Burlington House in London in 1931. Other little bits and pieces were shown sporadically in several exhibitions around the world—Leningrad, Paris, New York, Rome, the Hague, Prague—in the 1950s. But even these brief and unsatisfactory glimpses ceased after 1962, and no one has ever set eyes on any piece of the album since.

No one, that is, except Washington-based art historian and Freer art gallery director Milo Beach. It took him 40 years to get near the album, but when he did, he spent a blissful seven days two years ago studying the jumbled pages of what he calls "the greatest of all Mughal books, without question".