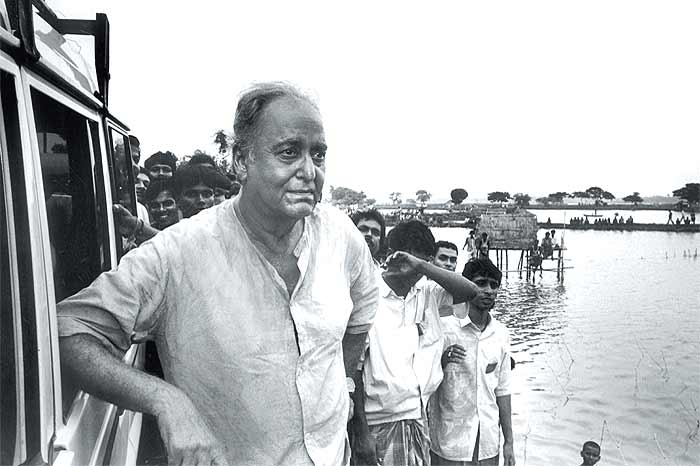 There are so many wonderful roles in the history of cinema that I think it would perhaps be easier to narrow down a list from five of my own roles. This list is not inclusive of the classics like my roles in Satyajit Ray’s Apur Sansar or Charulata, because in a way they have already been immortalised in the history of Indian cinema.

Abhijan (1962) I still recall playing the role of Narasingh, a taxi driver, in the movie. I knew and closely observed someone like him. Even today, sometimes as I lay awake at night, my conscience asks, “Was I able to do justice to him?”

Sansar Simante (1975) The second role that still haunts is the one in which I played the part of a thief, Aghor, in the aforementioned film. Unlike the taxi driver, I never knew a thief from close range, so I had to acquaint myself with such a character by reading books...for instance, author Bhakti Mullick’s Oporadh Jogoter Shobdokosh (A Dictionary of the Underworld) and Oporadh Jogoter Bhasha (The Language of the Underworld). The pain and distress that the character felt still haunts me.

Wheel Chair (1994) The third role that I would list is from Tapan Sinha’s film Wheel Chair in which I played a wheelchair-bound man. I aspired to portray not just the psychological but also the sheer physical discomfort of such a person. I trained for eight months in order to get the feel of how a wheelchair-bound man would move, act and express himself. My greatest reward is that after watching me play the role, a wheelchair-bound man (in real life) came to me to thank me and tell me that I acted exactly as he felt.

Atanka (1986) The next one is also from a Tapan Sinha film, where I played a retired school teacher who witnesses a murder. He is shaken not by the act of witnessing the murder but by a threat by the perpetrators of the crime who tell him, “Mastermoshai, apni kichu dekhen ni (you haven’t seen anything).” You can’t portray the character of someone who lives in constant fear from such a threat and forget about it. The experience stays with you.

Koni (1986) The last one is my character from the film Koni in which I play the coach of an eponymous girl. These days, when I feel down (Soumitra is fighting terminal cancer), I murmur my dialogues from that film to myself and say, “Fight, Soumitra, fight.”